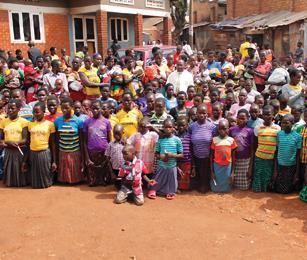 The party that changed lives

Most people’s idea of a Christmas party is to get a few friends round for mince pies. But in 2008 Maureen Mwagale threw a Christmas party with a difference. The guests were strangers and the venue, a Ugandan slum. Clare O’Driscoll tells her story.

Mother to two grown sons and working full-time, Maureen never planned to start a charity. But earlier that year she’d read an article about Kampala street babies. Having grown up there, Maureen knew there were children on the streets. But not toddlers. And never in the numbers described.

“They’re from Karamoja,” she heard when she dug further. “Their way of life has changed and now they’re using their children to beg on the streets.”

Having already planned to spend Christmas with her mother in Kampala, she decided to collect clothes and shoes to give to the street children. Maybe she could have a small party?

Word got around and soon bags of donations piled up at her local church. Meanwhile in Uganda, local companies provided drinks and a hall was hired near the slums. With her family’s help, she organised food, enough for 150. Christmas morning was spent decorating the hall, cooking and setting up music. Around noon, families started to trickle in. By 12.30 there were 300 guests and more outside. By 1pm there were 700.

“We don’t have enough food!” came the cry. Turning people away was never an option, but where do you find food for an unexpected extra 500 people on Christmas Day? Maureen’s mother rushed home and asked her neighbours to cook more rice and beef. Dinner was late, but everyone was fed. For many children, this was the first nutritious meal they’d had all year and every plate was licked clean.

Colourful, noisy and vibrant, the party was a success. Clothing and toys were shared out, and children danced and sang. Maureen found herself promising to come back the following year; in fact, to come back every Christmas.
That was when she became more than a well-meaning donor to the Karamojong. She jumped into their gritty world feet first and became their friend.

Achieving her initial aim of giving these children a party only made her more aware of how needy they are the rest of the year. After Christmas the toddlers were back on the streets, so the rest of her holiday was spent either in the slums or unsuccessfully badgering government officials for help. When she returned to the UK, the memory of the street babies went with her, like a stone in her shoe.

As soon as circumstances allowed, she was back in Uganda. This time she made the dangerous eight-hour journey across unmade roads to the semi-desert terrain of Karamoja, in the North-East. What she found was a people who had lost everything. Traditionally cattle herders, their livestock had gradually been stolen by rustlers, and with it, their livelihood. Desperation to survive sent them to Kampala to beg. She prayed for wisdom. How could she help them? “Support the women,” came her mum’s advice. “Give them skills.”

And this is what Maureen has been doing ever since, training one group of women to make paper beads and giving another a loan of 20kg of beans to start a business. Still others were taught to make soap and candles. She organised workshops for all of them on running small businesses and managing money. Equipped with new skills, many women returned to Karamoja.

In 2010 the work became an official charity – Kaana (Luganda for “small child”). Kaana works directly with the street children, but also indirectly by supplying Alekilek School in Karamoja with books and other resources (where previously 230 children shared five textbooks). Meanwhile, six former street children are now at boarding school thanks to Kaana.

As well as her desire to help the Karamojong, Maureen wanted to share the reason for her practical love. So from the second year onwards, Kaana involved the local church, offering a huge baptism service before the party. Inevitably, countless parents choose Maureen as godmother (she now has well over 100 godchildren). An outsider reading the baptism lists might also wonder at the higher than average occurrence of babies named Maureen!

One godchild is particularly special. Maureen rescued seven-week-old baby Eric from juvenile prison after government officials clamped down on street children. And when another baby, Joseph, tragically died in the Kampala slums, Maureen took his family back to Karamoja for the dignified burial they longed for.  “It still breaks my heart, but that was when the bond between me and the Karamojong deepened.”

If family is important to the Karamojong, it’s important to Maureen too. She has roped in her own family as volunteers and, when she’s in England, her mother happily takes on the work in Uganda (despite approaching her 70th birthday), visiting slums and inviting the women to her home.

Back in Kampala for Christmas 2014, Maureen saw changes. At first she was encouraged by the noticeable absence of Karamojong children on the streets. But, during the baptism service, a new challenge became apparent. When the priest called the candidates, instead of mums and babies, the majority of those coming forward were teenage girls – around 80 in total.

Determined to find out how these Karamojong girls had ended up in Kampala, she visited them. What she found was distressing: over 200 girls between the ages of 10 and 16 were living in squalor. Some had babies. She heard they had come to ‘work’. Some were selling beans, but many others had turned to prostitution.

Deeply concerned, Maureen is looking into ways of giving them hope and safety, through training in literacy, employable skills and health.

“Aren’t you scared?” people ask regularly. But she sees no reason to fear while she is doing what God wants. Whether it’s tackling customs about importing donations, negotiating with prison guards to release an innocent baby or, more recently, skydiving to raise funds for the street girls’ education.

“I didn’t think about it until I jumped out of the plane. I knew I was doing it for them.” Maybe that’s a metaphor for her work with the Karamojong. She doesn’t worry about danger; she just jumps. And she has never doubted the source of her courage. She has always known God is by her side.

In March this year there was another celebration. This time in the House of Lords, where Maureen was one of 12 people nationwide to receive a Rotary Champions of Change Award for “outstanding volunteer work to improve the lives of others”.
Maureen was both humbled and inspired by the award but, one thing is clear, she loves what she does. Smiling, she remembers one party where a tiny girl alternated mouthfuls of beef with licks of her lollipop. This is Kaana in a snapshot. A happy melting pot of God’s love, where practical care meets a dash of childhood joy.

+ Clare O’ Driscoll is a language tutor and writer.
+ To find out more about the work of Kaana, visit www.kaana.org.uk