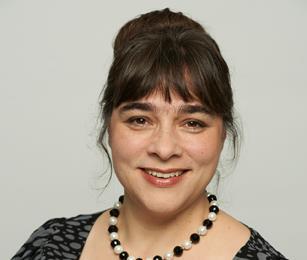 Meet Dr Eve Poole, a management consultant and theologian who’s bringing ‘Kingdom values’ to the world of business. She talks to Catherine Francis about how small decisions can make a big difference.

Eve Poole is a woman who thinks big. When she sees a need for change, she doesn’t start with the little issues – she goes straight to the heart of the problem. In her book Capitalism’s Toxic Assumptions, Eve rejects the idea that the worldwide financial system is a machine that’s now too big to change, and insists it is possible to reinvent a healthier economic system from the bottom up.

“In science, no one believes the earth is flat any more,” she says. “Economists, on the other hand, haven’t budged from their original worldview. The assumptions of capitalism may have served the world in the past, but they’ve become cancerous and are slowly killing the system.

“Capitalism masquerades as a machine programmed by experts, with only economists and governments qualified to tinker with it. But the market is just a mass of messages about supply and demand. If we want to change things, we don’t need to wait for the experts. We can start now, shifting behaviours and adjusting how our financial ‘votes’ are cast.”

Eve, 44, is a business consultant and lecturer, but she started out as a theologian, and it’s her understanding of both economics and ethics that puts her in a unique position to critique the financial world. After completing a theology degree, she worked for the Church Commissioners (which manages the Church of England’s assets) for four years.

“It was an interesting time to be there, as the Church had just lost a third of its portfolio and was trying to modernise and become more business-wise, as well as more ethical in its investments,” she says.

The experience led to a desire to learn more, and a conviction that the Church needed a better understanding of good business practice. So Eve returned to education to gain a Master’s degree in business (winning MBA Student of the Year), then combined her two interests in a PhD on capitalism and theology at Cambridge University.

She honed her skills at top consulting firm Deloitte, specialising in financial services, and later joined the staff of Ashridge Business School in Hertfordshire, where she’s still an associate. Her many clients include Tesco, WH Smith and Lufthansa, as well as arts projects such as helping members of the Royal Shakespeare Company develop their understanding of power and politics for a production of Measure For Measure.

“It was brilliant to be at the first night and see how they nuanced the characters based on the work we did,” she says.

For many of us, the world of big business and economics seems impenetrable and largely irrelevant to our daily lives. However, Eve has a talent for demystifying big concepts, and she maintains that each of us can play our part in making the world a better place through our everyday choices. Her latest e-book, Ethical Consumerism, looks at just that.

“It’s really about shifting our consuming to a Kingdom approach, and holding in mind the end game and what God wants us to work towards,” she says. “The Kingdom isn’t just about what happens after we die – in fact, it’s apostasy to say God can’t deliver in this world. There’s a lot we can do to bring flashes of the Kingdom into the everyday. Where you choose to bank, the businesses you buy from – you can kingdomise your bank statement and make it a thing of beauty!

“Money is a God-given resource. However little we have, we have some control over how we spend it. My view is: this isn’t my money, it’s God’s money, and I need to be holistic about how I use it. If every Christian tried to make every financial transaction they make for good, we’d change the market overnight. Consumer choices change things more quickly than legislation if enough people vote with their feet – so be curious, bossy and demanding!”

Money management is a skill that’s often missing in churches. Much like running a small business (or branch of a business), leaders need to be able to manage the budget effectively for a church to survive and thrive.

“There’s something of a rejection of financial matters within the church – a suspicion that mammon is sinful,” observes Eve. “However, church leaders are often ill-equipped for managing the finances and would benefit from some basic business training. Otherwise, they’re very dependent on a small number of people in their congregation who have that skill set, and can even be manipulated by them.”

Eve is also interested in the role of spirituality in the workplace. She’s chair of Faith in Business at Ridley Hall theological college in Cambridge, and an associate of several think tanks focusing on faith, business and ethics.

“There are a lot of Christians in the business world, but not many who are ‘out’ as Christians,” she says. “They worry that people will be suspicious of their decision-making and it will be career-limiting. I’m out and proud about my faith! I’m happy to be a role model and witness, and I’m open about the influence my faith has on my ethics.”

Indeed, Eve now specialises in teaching ethics and leadership. She admits there’s little appetite for considering ethics in the business world – but her lectures are often the ones that have the greatest impact on participants, as she challenges them to examine their motives and reconsider their perspectives. Good character is vital to effective leadership, she believes – something she’s exploring in her next book, Leadersmithing.

Eve reports that women are still very under-represented at senior levels of business, and the glass ceiling remains evident. In fact, she herself is often seen as an oddity in the very male world of business management.

“When I give a lecture, I’m often standing in front of a room of older men – and they assume that if we disagree on something, I’m wrong because I’m female and younger than them!” she says. “I do a lot of public speaking to challenge that perception. It’s sad that every generation of women faces the same battle, but we have to keep fighting the fight.

“In most businesses, you’re lucky if even a quarter of the board is female. At partner-level in Deloitte, there were a handful of women among hundreds of men. There aren’t enough role models for women at high levels – I’m in favour of positive discrimination to speed that up. The qualities women bring to management aren’t recognised. For instance, research shows that under pressure, women are hard-wired to respond with a more fruitful ‘tend and befriend’ instinct, rather than men’s ‘fight or flight’ response.

“However, the jobs are often so awful that women don’t want them! Companies need to be more female-friendly and introduce flexible working arrangements. Women hold themselves back too, in terms of confidence, so we need to tool women up to do those jobs if they want to.”

To that end, Eve set up Verve, which offers courses and coaching to help women develop the skills and confidence they need to build their careers or return after a career break. “The parable of the talents reminds me how important it is to help people identify their talents and nurture them,” she says.

Eve also has her eye on the next generation. She’s chair of the board of governors at Gordonstoun, a prestigious public school in Moray that has educated three generations of Royals and many others in positions of influence, and is the birthplace of the Duke of Edinburgh Awards.

“I’m the first female chair, and probably the first to be educated at a state school (before gaining a board school scholarship for sixth form), which sends out a great message,” she says. “When you’re invited to do something like that, you say yes! I have a passion for character-based education, and if our elite schools are producing future leaders, they really need to get it right. I’m able to contribute towards the direction and decision-making of the school, and give speeches to students.”

Where the heart is

Eve’s enthusiasm for the next generation isn’t just theoretical as she’s also mum to four-year-old twins, Hatty and Kate. How on earth does she manage everything?

“By having a fabulous husband!” she laughs. “Nathan and I met when I was at Deloitte, and he worked at an investment bank. We now live in Edinburgh, not far from my hometown of St Andrews. Nathan has taken time off to look after our daughters while I continue working. It’s not sustainable forever, but for now we’d rather live on less money and give that time to our children.”

Eve considers her own Christian upbringing a “privilege” and is enjoying giving her girls the same advantage, taking them to church and “walking with them in the ways of God”.

Still a theologian at heart, Eve also preaches at local churches, and enjoys singing in choirs. “I love the Anglican choral tradition and I’ve sung in church choirs from a young age,” she says. “I’m taking a break while the children are young, but I look forward to getting back into it.”

She also relaxes with an unusual hobby: making hats!

“I took myself on a millinery course to distract myself while I was trying to get pregnant and I really enjoyed it,” she says. “It’s creative, it’s a nice way to relax, and it’s good to be reminded that you can always learn something new. Plus,” she adds with a laugh, “I discovered that, if you’re not too happy with your figure, a huge hat is a brilliant way to distract attention!”

Eve brims with confidence, but says she was a “desperately shy teenager” who had to develop her self-assurance to succeed in her career. What are her secrets?

“Fake it until you feel it,” she says. “If you behave confidently, you fool your brain and body into feeling more confident. People respond to your self-assurance, and that in turn builds your confidence, creating a positive cycle. It’s definitely something you can develop.

“Also, it’s a fact that women have to trade on appearance more than men – so turn that curse into a blessing. Spend a bit of time on the packaging, such as hair and nails, and dress appropriately. It will help to manage your anxiety.”

• For more on Verve (career coaching and workshops for women), visit www.vervewomen.co.uk