Called to be funny 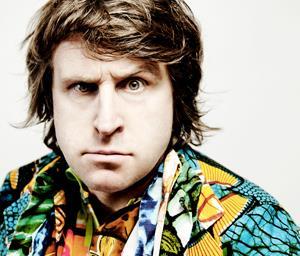 Milton Jones is a comedian best known for his wild hair, loud shirts and deadpan one-liners. He is a regular guest on Mock the Week and is also the author of 10-Second Sermons with the second book in the series coming out soon. He is a previous winner of Perrier Best Newcomer, a Sony Award and British Comedy Award nominee. He spoke with Ali Herbert

Where were you brought up?

I was born in Kew, just down the road from where I live now, to a nice middle-class family who were Christians. I went to a good school. My problem doing stand-up is that being a white, middle-aged bloke is not what people want to cast for certain shows – but having said that, in terms of background, it was very privileged in many ways. Sunday would consist of Sunday school, church, Crusaders in the afternoon, evening church, then the youth group after that – and maybe watching Songs of Praise if we were lucky!

Did you enjoy that?

I enjoyed the bits in between all the bits … Growing up there was the eternal conundrum of Christianity which was: boredom versus ‘l quite like these people’ and never being able to quite tally that.

Did you have a teenage rebellion at any point?

I think at one point I cycled home with no lights on from youth group! I wish I had actually. My wife has had a similar background and it’s been quite hard because we’ve had no ‘before and after’. You kind of get to middle-age and go “I haven’t really kicked out – is it too late?” But then I’m just doing it for the sake of it.

Having said that, my career path – for my mother at least – of me earning a living in the back of pubs is probably the antithesis of what she wanted.

So is humour genetic?

You wouldn’t have noticed it particularly but my parents were very good at laughing – and laughing at themselves. My brother Andy and I would put on little shows and make tapes and I think that was the beginning.

Did you always want to be a comedian?

I tried to be an actor originally. I worked with Riding Lights for a bit, along with all the odd jobs you do. Then comedy started to happen and the thing about comedy is that you’re not waiting for someone else to phone you – you get up and do it. But it takes two or three years to find a voice that’s different to someone else and to build up the contacts. Lots of really funny people at the time gave up. It’s been described as learning a musical instrument except you do all your practice in public, so it’s building up a thick skin so you can cope with failing.

I went on stage, forgot everything I was going to say, the audience booed and I ran home. I didn’t do anything for two years after that.

How did you develop your stage persona – and how much of it is the real you?

Trial and error. I think all comedians do a version of themselves. I found if I went into a rough club it was really hard work because if you sound slightly middle-class and appear to be doing something clever it’s slightly threatening. However, if I stuck my hair up and put on a silly shirt they went, “Oh he’s mad” and it was alright. And it also acted like a signpost saying I’m not a ‘blokey’ bloke, saying blokey things; it might just be left field in some way. So that began to work. I almost gave up a couple of times and then I had a couple of good Edinburghs.

I got Best Newcomer and then I got nominated again the next year. It’s like a trade fair really, so then producers came in, and I got a radio show.

Tell us about the radio show?

Originally it was called The Very World of Milton Jones on Radio 4 and then we did The House of Milton Jones and Another Case of Milton Jones. That suited my wordiness well and it’s quite accessible in terms of not swearing, which suits Radio 4 at 6.30pm. That whole style was hard to begin with because I set myself the task of not swearing and not being offensive. With the radio shows I won a silver Sony Award and was nominated for a Writers’ Guild Award in 2012.

Will you develop your character?

I think artistically if you don’t keep changing you die, partly because you get bored with yourself, but also you don’t realise that society is moving on. Comedy’s very much of the moment.

Because comedy is to do with revealing the truth about stuff and society is moving on. The words that are relevant, the things that are happening topically, people’s attitudes to stuff – like smoking maybe or racism – who knows what we’ll look back on in 10 years’ time and say “I can’t believe we did that!”

Where do you get your inspiration from?

Quite often I book a small theatre out of town and that is my deadline. That will give me the adrenaline to write stuff because I know people are coming to see me.

Do Christianity and the comedy world work well together?

The good thing about being a comedian rather than an actor is that you’re in control of what you say. I think it’s more to do with the spirit of what you’re doing and the joy (or not) that you bring. But something that annoys me is when Christians say “Wouldn’t it be wonderful to use your platform to preach the Gospel?”. The trouble with that is that we’re employed to make people laugh. If you confront someone with their personal sin they’re not going to laugh. On the other hand, when I occasionally do stuff at church, I try to mix it up and be more challenging, which isn’t what I’d do in a club.

You have a book out – 10-Second Sermons – do you think sermons should be shorter and funnier?

There’s a new one coming out this year. It’s called that because I work on one-liners and that’s how I think – it’s easy for me because I have no one to report to, and church leaders do!

Do you enjoy being on Mock the Week – is it as stressful as it looks?

It’s a scary thing to do because the way it’s set up is it’s seven people trying to fit through a door for two. So if you’ve got something to say it had better be funny! Because it won’t make the edit if it isn’t, and the audience will lose faith in you and it’ll get harder and harder to say something. It’s very stressful – no-one looks forward to it. Everyone gets on with each other but it’s a dogfight. The director keeps meeting people for whom their one appearance on Mock the Week was the worst day of their life. A lot of people won’t do it. But it’s a powerful show. The joke is that it’s how students find out about the news.

Do you prepare for it?

Basically it’s like a big exam in that you’re told what subjects could come up – but it doesn’t mean they will. The day before, you know what’s in the news obviously and they give you some steers in terms of “We’re thinking of doing this, this and this” so you try and write stuff all around it. But it takes three hours to record a half-hour show, so even if it’s in the show most of it won’t be in the edit. The scariest thing is that you don’t know what anyone else is going to say.

Why aren’t there more women in stand-up comedy?

For all the non-sexism of the late 80s there are not that many women stand-ups, probably one in 10 if that. There are all sorts of interesting theories such as ‘men like to address a group’ and ‘women like to talk to individuals’ – these are obviously massive generalisations. And then there’s the whole competition thing – are women as bothered?

Do you think knowing you are a Christian changes people’s attitude to you?

There’s something quite releasing about having it out there. What I don’t like is that I become the go-to person. For instance if Newsnight are talking about blasphemy they ring my agent to ask me to comment – by and large I don’t do it because I don’t think it’s my job. You become a little figurehead for their perception of the Church. Or perhaps Greenbelt will ask me to talk about ‘art and the media’ and I could work that out, but I don’t think that’s what I’ve been called to do. I think I’m supposed to be with comedy people, in the comedy industry, being a comedian.

+ For more information about Milton Jones or to find out where you can catch him on tour go to www.miltonjones.com

A quote from my new 10-Second Sermons book is:

My 10-Second Sermons is my hot-cross buns – here’s what I feel about church? and faith …