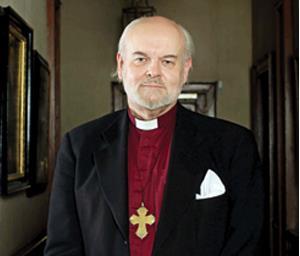 Bishop of London Richard Chartres talks to Ali Herbert about the challenges facing the Church, the royal wedding and wearing a mitre!

Richard Chartres is the 132nd Bishop of London and is the President of the Bible Society. He is Knight Commander of the Royal Victorian Order (2009), Prelate of the Order of the British Empire, Privy Counsellor, Church Commissioner and Chairman of the Church Buildings Division. His sermon in 2011 at Westminster Abbey, for the wedding of the Duke and Duchess of Cambridge, was watched live by two billion people and his words, “Be who God meant you to be and you will set the world on fire” struck a chord with people all around the world.

Did you grow up with a Christian background?

No I didn’t and that’s a great advantage, of course, because it means that I have an experience very much like most of the rest of the population. My parents weren’t hostile, but they weren’t interested particularly.

How did you find faith?

Faith found me rather than the other way round. It certainly operated very powerfully through my brother who was only two years younger than myself and was very severely mentally handicapped. He was never able to look after himself, and was therefore disqualified from all life’s glittering prizes which for most people make life worth living: there was going to be no marriage, or career, or possibility of education at that point. So he lived with us and died when he was in his mid-twenties.

But his life wasn’t a tragedy – it was full of joy, music, love. I think the question: “What’s it all about if my brother is disqualified from the word go?” has been with me since the age of two. And I think that brought me to a point of questioning and perturbation and then an encounter with the Holy Scriptures.

Do you feel that that journey is now complete?

The pilgrimage is not over – it’s hardly even begun but it’s been a combination of really profound questioning plus an encounter with the Holy Scriptures, deepened by the kind of prayer that dispels illusions. Saint Augustine hails God as having a beauty that is ancient but always fresh, and I think it’s the work of the Spirit to root us in that continuous spirit-filled tradition.

And you have been the Bishop of London for 18 years?

In 1995 I became Bishop of London. All the legal documents are signed “In the 18th year of my translation”! I’ve been a bishop for 20 years – I was previously the Bishop of Stepney – and a parish priest before that in London, in the obscure part of Westminster. Our speciality was being ordinary, which is quite a speciality in central London.

What is it you enjoy about London?

It is of course a great city state, it has three million more people than Scotland. People really don’t see London, it seems to me, as quite the extraordinary place it is. It is quite unlike the rest of the UK. Who could fail to be excited by the life of this city and the life of the Christian community here?

Do you have a particular vision for London?

We have had, in the past, the conversation about what is the Spirit saying to us in the life of London? What are we being led by Jesus to say and do? And that was distilled and published as London Challenge 2012 and lasted five years up to the Olympics. We’ve now turned our attention to the next seven years and we’re developing Capital Vision 20/20. The three main themes are emerging: Confidence in the Gospel of Jesus Christ, Compassion in the name of the God and Father who so loved the world that he was generous and gave himself to us, and Creativity in the power of the Holy Spirit.

So those things are now being broken down into specific ways in which we can express our Christian life together over the next seven years, in response to some of the major demands of this great city.

Do you think there is a new sense of spiritual hunger in the country?

I’m extremely grateful to the New Atheism – I think it’s been one of our great allies in causing Christians to wake up! In some ways, spiritual life is constantly compared in the Holy Scriptures to waking up, becoming aware, not being sunk in a life in which, as Luther says, you are turned in on yourself. So anything that wakes us up is to be applauded.

But there are, of course, an enormous number of nominal Christians and I think that’s a huge challenge and opportunity for us. The population’s growing. We are only just scratching the surface, but we are not at all complacent about the situation of the Church. Although every single week at some point in Greater London 640,000 people are worshipping Jesus Christ in more than 4,000 Churches – and if any political party had 640,000 members who were meeting every single week for a single purpose we would hear about it!

What should the Church be communicating?

It is absolutely vital that we find convincing ways of communicating the fact that happiness and fulfilment – or misery and depression – in life comes not from what you know or do not know, it comes quite simply from whether you love and whether you are loved.

What do you think the future holds for the Church?

I’d say this is a time of huge peril and promise – not only for London but also globally. I think the role of the Christian community internationally is in facing up to that, in recognising the sign of the times and the real dangers that surround us and doing something to build a civilisation of love in the spirit of Jesus Christ, and never has our work been more urgent.

Do you find your role as bishop stressful? You seem to stand in the gap between privilege and poverty – do you feel stretched in two different directions?

It’s one of the privileges of the role that in a very compartmentalised world I am the Dean of Her Majesty’s Chapels Royal … and someone who knows as friends lots of market traders. Far from feeling stressful, that’s one of the best things about the job. I believe in the Naval approach that the Naval chaplain takes the rank of whoever he’s talking to. I think that’s a very good rule of thumb, going about this world cheerfully, finding God in everyone.

When you preached at the wedding of the Duke and Duchess of Cambridge, it must have been the most listened-to sermon anywhere?

Yes, some extraordinary messages came back – a man in Los Angeles said he’d downloaded it and was exercising to it in the morning! I’m not quite sure how you’d do that, but it was an astonishing testament to the world we live in!

How did it feel to be giving such a special sermon?

I always say to every couple I have married, “Will you please write a prayer together?” It’s one of those ways of providing a context for a conversation about themes which, when you’re excited about the details and preparation for the day, you find it difficult to get round to discussing together. And that’s what they did and that I think, perhaps made the greatest impact of all. It was very much in their own words.

What would you say is the biggest challenge of being a bishop?

You can be bogged down in a life that ‘smells of interiors’ where there is an elaboration of defensive bureaucracy. There are frustrations of that sort.

How do you relax and unwind in a busy schedule?

I don’t believe in the problem of the work/life balance. I think that’s quite the wrong way in which to analyse the situation. Work is the place where we express ourselves and grow. There are only two things worth doing in life and they are love and work. I think that what has happened is a disastrous obliteration of the rhythm in human life. Therefore that is what we must seek to restore: the rhythm of the church year, the rhythm of the week, seriousness about a Sabbath. My wife Caroline and I have four children and we have tried to keep a Sabbath on a Friday evening, to gather together as a family to do something on a Saturday morning. And that is just one example of what is so crucial if you are to survive.

Do you have a hobby?

If you’re a priest and a spokesman for the ineffable and an ambassador for the invisible you really need something concrete to balance that – and I am a Fellow of the Society of Antiquaries. I very much enjoy ruins, the whole business of reconstructing the life of various places in the past. I find that immensely refreshing. I’m afraid it’s not what a sensible bishop would say!

I hope you don’t mind, but my eight-year-old daughter Gracie wanted me to ask: “Is the hat itchy?”

The Hat. I’ve got quite a small head and actually the problem with most mitres is that they come over my ears – so they have to be packed, in order to stay on. But it’s actually a very interesting question – Bishops used to wear wigs until the middle of the 19th century, but when the wigs went, the head was available for funny hats. So the mitre-wearing came after the wigs disappeared.

+ For more information about the Bishop of London go to:
www.london.anglican.org/BishopOfLondon