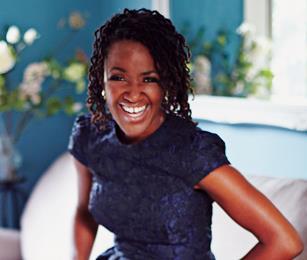 There’s no such thing as a perfect mum!

For 25 years we have been inviting Diane Louise Jordan into our homes; first as a Blue Peter presenter, then on Songs of Praise and more recently also on Radio 2 presenting The Sunday Hour.

Her warm smile, professionalism, gentle dignity and keen interest in whoever or whatever the subject is have seen her become one of the most trusted and respected presenters.

She has acted as a committed and passionate ambassador for numerous charities and campaigns, and she is also a wife, mother and grandmother (yes, really – a grandmother of three!).

So, life is full and Diane gives her all to whatever role she undertakes but, like every one of us, she feels the pressures of modern life.

We can all find ourselves competing on Twitter or Facebook, she says, insisting we are having the nicest time, being the happiest, most popular person. “The pressure to be seen to be something means that it is much more difficult for us to be vulnerable with one another and have the sorts of friendships where we can support each other through the tough times.”

This burden of claiming success and happiness is probably felt most keenly by parents, Diane feels, and it is one of the reasons why she works so hard for organisations which support families: “Being a parent is the hardest job in the world to do. It’s such a responsibility to have another precious life in your hands. And magazines and TV programmes promote an image of perfect motherhood which is not a reality.”

This leads to women carrying around a tremendous amount of guilt, she says. “There is so much pressure to be the perfect mum. But it’s good enough to be good enough,” she advises. “If we are there for our children, day in and day out, that speaks volumes.”

For the past two years, Diane has spoken at numerous venues throughout the country in Care for the Family’s Mum’s the Word programme of events. With her fellow presenter Cathy Madavan, Diane has shared fully about the challenges she has faced as a parent over the years.

“Cathy and I stand on the stage and say we get it wrong; lots of people get it wrong, but their families are all right. We want to encourage women when they are in that tough place, not to give up.”

And, while so much of Diane’s personal and professional life has been in the public eye, it is her down-to-earth nature and honesty for which she is held with such affection.

“I think when you are bold enough to show your vulnerability, it gives people permission to say they’re in the same boat. It gives us space to be kind to one another.

“There’s no difference between us and the other ladies in the room, apart from the fact that we’re telling the stories,” she says of the Mum’s the Word tour. “I think unless you give a little of yourself and your own situation, how can you really imagine that other women are going to feel safe enough to relate to you.”

Diane’s own story is particularly powerful. As a young, touring actress, she had no thoughts of responsibility or of settling down, but suddenly her sister died leaving a young daughter, Justine, whom Diane adopted.

“I was having the time of my life, then overnight my sister died and I became mum to this two-year-old.

“Being a parent, you have to face the realities of life,” she says. “I was mourning the loss of a sister and yet at the same time I was so grateful she had left behind this life, this beautiful human being. I felt that God was so amazing that he had orchestrated this gift of life to me out of an incredibly sad situation.”

Of course it was a difficult time, not least because Diane received advice which conflicted with how she felt she needed to deal with the situation.

“Justine kept coming into my bedroom in the middle of the night and people told me to take her back to her room and let her cry herself to sleep, otherwise I would have a clingy and dependent child. But my little girl had just lost her birth mother and was bewildered and lonely. She should have stayed in my bed and I should have comforted her.

“So I hope mothers will follow their instincts a lot more. I think that what you are feeling in your heart is probably a prompt of a direction you should be following.”

Diane also came under attack for her efforts to provide for her new daughter. Unable to take a toddler on tour with her, she had to stay at home and, without an income, claimed benefits.

“I was vilified for being on the dole, and called a benefits scrounger. Then a few months later I landed the Blue Peter job and was accused of being a career woman! So many women face a similar dilemma and whatever we do, we are criticised.”

Diane appeared on Blue Peter for six years, joining in 1990 when she made history as the programme’s first black presenter. Moving on in 1996, her popularity was such that an unprecedented two shows were dedicated to her departure. She is still stopped on the street by people with memories of the children’s programme, despite having been a presenter on Songs of Praise for a much longer period.

“I was in the corner of people’s homes three times a week and was part of their family unit, I suppose. I feel really humbled that people remember me. And people are so nice. I’m very lucky. How many people can say that every day someone will rush up to them saying ‘You’re so lovely, you’re part of my childhood’? If I’m feeling a bit grumpy that day or think the world’s against me, that peps me up.

“I loved working for Blue Peter. The team behind the scenes and the culture of the programme was fantastic.”

The editor at the time was Lewis Bronze and Diane believes the lessons she learned from him have stood her in good stead in life and work. “He had such high production values. He really cared about his audience and taught us to respect and honour whoever came on the programme. There was a sense that we were providing an act of service, so he didn’t allow egos, and he encouraged us to do everything with excellence.”

Lewis has remained a family friend, and all the presenters are still ‘mates’. “Even the presenters I haven’t worked with are friends. We all know each other and like each other. We are an extended family.”

Radio 2 is Diane’s new working family and she speaks warmly of her producer and team while also acknowledging the appeal of the format of The Sunday Hour, allowing her to communicate directly with her audience. “I love people and I love engaging with them, so it feels like it is more about my personality and the things I care about.”

Diane is also now trying to pursue a different pace of life. “I am trying to slow down. It’s good to take time and be still. But it’s a bit of a challenge for somebody like me because if there is ever a gap, I think, ‘Oh, can I fill that!’”

With her husband, she has moved house recently to be near her daughter and grandchildren, and village life has offered a new routine. “A girlfriend and I are able to go to church at the beginning of the day and wait on God. Most days at about six o’clock (but not all days!), we just sit there. It’s a lovely start to the day.”

Diane was brought up in a Christian home. “I think all Caribbean families of my generation went to church, so I believed in God when I was younger. Then I went through a stage when I started questioning things.”

An Alpha course helped her address some of the questions and her faith has built ever since, she says. “I don’t know how people live without God in their life. I can’t get out of my bed unless I’ve asked God ‘What’s next?’ I try as much as possible to keep a vertical as opposed to a horizontal perspective.”

She also values the support of good, prayerful friends who, she says, she runs to in the emergencies. “I think everybody needs people dedicated to lifting them up and sharing that prayerful journey with them. If I’ve got big decisions to make about work or family life, this faithful group will join me in seeking God in everything. I think that should be the model for everybody. We are not meant to do these things alone.

“It says in Scripture that God has a plan for every one of us. I have to remember that I was born at this particular time for a particular purpose. I don’t know how long God is going to have me in the public eye. I don’t know what tomorrow will bring, but providing I do everything in his will and am prepared to lay all of it down, then I think that helps with the everyday highs and lows.

“The reason I am able to deal with being a public face is because my CEO is Jesus! I have to answer to him. I used to say when my mum and dad were alive, my mum loves me, my dad loves me and Jesus loves me so anything else is a bonus.” Now with her husband, daughter and grandchildren, she says: “It is still true.”

+ Catherine Larner is a freelance writer based in Suffolk