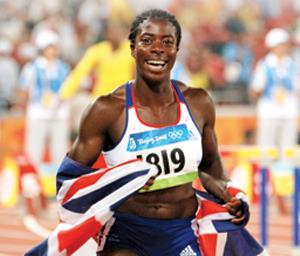 I want to encourage kids to work hard

With over 10,000 athletes from 204 countries taking part, the Olympics are guaranteed to attract visitors from around the globe. In fact, statistics estimate that television viewers alone will reach the four billion mark. But whilst Olympic fever may be international, for the reigning 400 metres Olympic Champion Christine Ohuruogu, it couldn’t be a more homely affair. Situated near the Newham area, where Christine was born and continues to live, the 2012 Stadium is within walking distance from her home.

Christine’s sporting ability was obvious from the age of 16, though at that time, it was the netball courts rather than the track that showcased her talent. She attributes her progression to “track and field”, to ambition and a natural desire for challenge. While skill is an essential ingredient, becoming an Olympic champion entails a lot of hard work.

“Track and field events are great competitive sports. I like a challenge and they suit my personality. But winning takes commitment, determination and competitive edge. I’m at the track every morning at 8.30am until 3pm for practice. After that, I’ll have my treatments. I sustained a few injuries a while back, but thankfully, I’m doing great now and am injury free. Back home in the evening, I tend to any business that needs sorting. It can be a long day.”

Apart from exercise and training, an athlete’s diet is very important, and Christine admits to having a sweet tooth. “I do love chocolate, but unfortunately, it isn’t part of the fitness regime! There’s no harm in eating anything in moderation, but generally I do try to eat healthily. During training, I tend to be fairly strict with myself and stick to a sensible diet.”

While Christine is well known for her athletic prowess, it is her Christian faith that forms the core of her character.

“I was brought up in a spiritual household and have been a worshipper with the Church of England for many years. My Christian faith is central to my life. When things get tough, I draw strength from it. There are many verses in Scripture that speak to me at various times and situations. Regardless of how busy my schedule, I find time to enjoy fellowship and worship. There is no clash between my faith and sport. In fact, many aspects of sport are a good analogy. Things like determination and finding strength when you didn’t think you could, often mirror those of the personal life. I think my sport and faith are simply a part of who I am.

“I learned patience and tolerance at home. With eight children in the house, my siblings and I had to learn to live together and share whatever we had! The experience has helped make me more understanding of others.

“I’m very close to my family; they are important to me and I see them as often as possible. As soon as I arrive back in London, my first port of call is to see everyone and catch up. My parents are very proud of my achievements although, at one time, they did hope I’d choose medicine as a career!”

Christian principles, family values and a winner of Olympic gold are the characteristics of a good role model for any youngster. Christine believes that the welfare of the next generation is a shared responsibility.

“With a direct correlation between health and physical activity, kids need to be encouraged to take sufficient exercise. Taking up a sport is a good way to do it. When I was young, we were happy to play outdoors in the streets and parks. As a community we need to come together and create a safe environment for youngsters to play and interact. We need to allow them space to enjoy being kids.”

Christine is also keen to encourage children through education. She herself has a degree in linguistics, and has written two, soon to be published, children’s books. Knowledge, she says is “a special gift”. Her stories, about a young girl overcoming hardship to become an athlete, have an overriding message.

“For kids today, there’s a lot of temptation and desire for five minute’s fame. I want to tell young people that if they work hard, they will achieve so much more!”

• Christine was awarded an MBE in 2009. She is an ambassador for Adidas, Aviva, Alfa Romeo and Holiday Inn