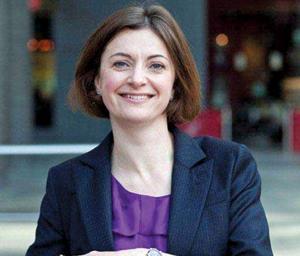 ‘I’m in an incredibly privileged position’

Lady Elizabeth Berridge is the youngest female peer in the House of Lords. She’s also a Christian. She talks to Andrew Boyd about being a role model, working for change and women in leadership

Elizabeth Rose Berridge, now Baroness Berridge of the Vale of Catmose, still registers surprise when she opens invitations to speak at high-powered functions. Appointed by David Cameron in 2011, this former personal injury lawyer is still adjusting to being a role model:

“There aren’t that many female role models out there,” she says. “I’ve had to come to terms with that. Now, when I’m shocked at invitations I just say, ‘Thank you very much.’

“I’ve been in this role for nearly two years now. It’s an incredibly privileged position. When I look around, the people I work with have led the army, created huge businesses and governed. I realise I need to suck in all the wisdom I can. Most people have been very encouraging and willing to offer advice.

“It can be odd being that young in that environment,” she admits. “For someone my age, I do spend a disproportionate amount of my time with men in their 70s! But they’re fantastic. They’ve welcomed me.

“Patronised? No, I haven’t directly been patronised … inadvertently, yes, I was often mistaken for a researcher in the early days,” she laughs. “But most people treat the word peer as just that. They don’t look down on you. It’s been a huge step up into what I am doing now. But all that can be asked of you is to give of your best. It’s a fabulous privilege.”

Lady Berridge returns often to this sense of privilege, a calling to public service, and doing your best. It may sound like the chorus of a prep school hymn, but this Tory peer is the scion of a comprehensive school. Encircling her neck is an elegant, twisted, silver cross. And running through her conversation like a thread is the need to remain humble and obedient to the Almighty.

“I do believe and have always believed I would have a role in government. I believe I’m in the place I should be, and the role I have is a vocation, a calling. So the challenge is not to grasp at privilege. I will perform best – and this is true for whatever role people are in, whether as a parent or a company director – I will function best if my significance is rooted in the fact that I’m a child of God. Once we deviate from that, all sorts of horrible dynamics can happen to institutions and individuals if we make decisions out of a need for significance. Jesus didn’t need to retain the position he had, which was the ultimate position. He let go of it for us.”

And having let go of her own ambitions, the Lord, like a perfect gentleman, stepped ahead to open doors for the Lady. “I’m incredibly blessed, and I know I’m incredibly blessed. I love the Lord and I know he has a purpose for my life. It’s been quite an adventure since I came to faith, and that’s involved turning down certain, very good opportunities that came my way – including marriage proposals.”

From her comprehensive school to Emmanuel College, Cambridge, to the Bar, with the help of a scholarship, Elizabeth Berridge worked for nine years in Manchester and Leeds in personal injury and licensing law, before moving to London to direct the Conservative Christian Fellowship.

“I came to Christian faith in a small rural Baptist Church of about 120 people. Since leaving Rutland, my home has been the Anglican Church and St Michael’s Chester Square. I worship in all kinds of different churches and because I’ve lived in Africa and the Caribbean, I’m very comfortable in a black Pentecostal environment.”

In July 2012, she was elected Chair of the new All Party Group on International Religious Freedom. Spells living in Ghana, and Trinidad and Tobago have made her an internationalist.

“The focus that I’m taking is to do with human rights. We really have let international religious freedom decline. It’s a poor relation to many other rights and I think there’s a big task not just in the UK, but globally.

“The UK has a lot to learn from other nations. In our own backyard the public detect a crisis of leadership in banking and business, among politicians, journalists, the police and many other institutions. We’re sliding and we need to find out why. This is a time for humility.

“Whether you are in leadership in public life or in business, the key issue is the personal integrity you bring to the role. I was in Uganda last year at the African Biblical Leadership Initiative, a forum run by the Bible Society, and I believe Africa and the UK share the same need for authenticity. Young people are wanting to be led. That’s what they are hungering for. When you have a breakdown of integrity, the currency you lose is trust. There is a loss of trust in the UK in all kinds of institutions.”

But things are looking up for women in Africa. The continent now has women presidents in Liberia and Malawi. One of Joyce Banda’s first actions as head of state in Malawi was to sell off the presidential jet and the country’s fleet of 60 Mercedes. And Liberia’s President Ellen Johnson Sirleaf was one of three women from Africa and the Middle East to win the Nobel peace prize for championing the non-violent struggle for women’s rights.

“It’s really encouraging,” says Lady Berridge. “It’s a very powerful signal. In the West we sometimes underestimate what these global awards can do. It enhances the credibility of their work and their status as role models. There are some incredible women leaders. Here in the UK it is still rare to profile significant women. There are still barriers, when you consider the problems we are having getting women to be MPs.”

Lady Berridge is at the very start of what could be a long career in the Lords. So, if things go well, how would she like to look back on her career? Once again she sidesteps the snare of significance. “I’ve always thought my epitaph should be ‘She loved the Lord and she loved life.’ I just want to look back and say to God, ‘I did to the best of my ability what I thought you wanted me to do at that particular time’.”

* Andrew Boyd is a writer, journalist and media consultant