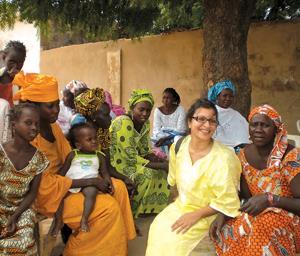 Amanda Pilz reports on female genital mutilation, a practice that affects over 3 million women every year

The next thing I felt was my flesh, my genitals being cut away. I heard the sound of the blade sawing back and forth. I didn’t move an inch … I wanted mama to be proud of me. Unfortunately my legs began to shake uncontrollably and I prayed, ‘Please God let it be over quickly’. Soon it was, because I passed out.” This account by Somali model and human rights activist, Waris Dirie, in her book Desert Flower, is just one of millions of female circumcision stories which could be told, but usually aren’t.

Female circumcision, otherwise known as female genital mutilation/cutting (FGM/FGC), is a practice which involves the partial or total removal of the outer parts of the female genitalia. It goes back to Ancient Greek and Roman times and still persists, despite the global fight to end it.

According to Ann-Marie Wilson of 28 Too Many, the practice is prevalent in 40 countries, 28 of those being in Africa. It is also found in the Middle East, Asia, South America, and, due to migration, in Canada, North America, Australia, New Zealand and Western Europe. Wilson estimates three million girls are cut every year, equivalent to one every ten seconds.

Here in the UK, it is estimated that 56,000-75,000 women and girls are affected by FGM and these are largely within the African communities, in particular the Somali community, which accounts for 99.5% of cases. This is despite the practice being outlawed here in 1985, and further legislation in 2003 which made taking children out of the country to have the procedure illegal. “As many as 26,000 girls are at risk at any one time,” says Wilson.

The reason FGM is so controversial is because it can cause mild to life-threatening health problems. According to the World Health Organisation, “FGM has no health benefits, and it harms girls and women in many ways. It involves removing and damaging healthy and normal female genital tissue, and interferes with natural bodily functions.” The immediate consequences can be severe pain, bleeding, septic shock, infection and open sores and, in some cases, death. Long-term consequences can be infertility, fistula (anatomical tears), pregnancy and childbirth complications, urinary tract and bladder infections and the need for corrective surgery.

Ending FGM is not going to be easy because it is a deeply ingrained cultural practice. “It’s a change of status from child to adult, a rite of passage, preparation for marriage which the women think is the best way of life for their daughters,” says Fatima*, a UK-born Somali. Julia Lalla-Maharajh of Orchid, who came across FGM while living in Ethiopia says, “I couldn’t believe women wanted to inflict pain on their daughters because they loved them as much as any mother. But I came to understand it’s about ensuring a girl is marriageable. To them, it’s far worse for a daughter to remain unmarried than it is for her to be cut.” Wikipedia states, “According to Amnesty, in certain societies women who have not had the procedure are regarded as too unclean to handle food and water.”

However, Dirie has a different take, “Female genital mutilation has nothing to do with tradition, religion or culture. It is the most cynical form of child abuse and a crime that has to be punished,” she once told The Times. Likewise FGM survivor Nimco Ali of Daughters of Eve says on Forward’s website, “FGM is a betrayal of the innocence of childhood, my faith and my culture.”

Tackling the issue here in the UK are anti-FGM groups: Forward, 28 Too Many, Daughters of Eve, Orchid, the Esmée Fairbairn Foundation, Mothers’ Union and Women’s Institute. On the global scene, there have been concerted efforts since 1979 by international bodies to end the practice, including sponsorship by the United Nations of an International Day of Zero Tolerance to Female Genital Mutilation, held each 6th February since 2003.

In 2008, the World Health Assembly passed a resolution on the elimination of FGM, emphasising the need for action in all sectors – health, education, finance, justice and women’s affairs. WHO’s efforts to eliminate female genital mutilation focus on advocacy, research and health guidance. Also involved are UNICEF and UNPD, World Vision and Tearfund. Tostan has done prevention work in Africa and Feed the Minds has done some work on alternative rites of passage in Kenya.

In addition there are myriad organisations in Africa seeking to end it. Sierra Leone alone has 70. “If organisations worked together and shared resources, there would be a domino effect of ending it because they could influence change in their own countries through the African Union and then ultimately through the UN,” says Wilson. “People in Western countries can do the same. In this way change will happen quicker. But nobody is doing that.”

Despite the obstacles, there is progress. Lalla-Maharajh says: “I was amazed to discover a grass-roots movement in West Africa where, in the last five years, 6,000 communities have chosen to abandon cutting their daughters. It happened through people realising it’s a socially constructed norm and by being educated on health and human rights. Once people know about the health impact, it’s hard for them not to re-think cutting their daughters. For example, health education leads to the realisation that it was tetanus as a result of a rusty blade, not evil spirits, which led to a girl’s death. If an entire community abandons the practice, then there’s no incentive to cut, but they must make it a visible declaration. Each intermarrying community is invited to the declaration so the message spreads. In this way the abandonment is often owned and sustained.”

WHO states that action taken at international, regional and national levels over the past decade or so has begun to bear fruit. As well as this, several African countries have enacted legislation against it and increasing numbers of women and men from practising groups have declared support for discontinuing the practice.

However, in many countries, the reduction in prevalence is not as substantial as hoped for, and in a few, no decline can be noted. Calls are made for the work against it to be intensified involving legal, political and social interventions. So while individuals like Fatima in the UK, who has decided not to cut her daughter, contribute to the demise of the practice, a lot still remains to be done.

“We’d like to see what happened in West Africa happening everywhere else, but what is preventing it is a massive lack of resources,” says Lalla-Maharajh. “Ending it is a no-brainer to us because it has such a huge impact on female and reproductive health. The main obstacle is the continued silence around the issue. However, the more we talk about it the more people embrace it, but the way we talk about it must be matter-of-fact rather than emotive.”

*Not her real name