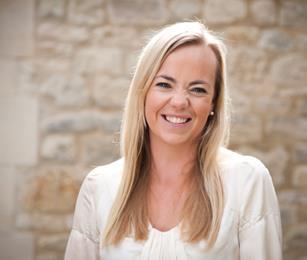 Amy Orr-Ewing is passionate about apologetics, presenting and defending the Christian faith in a way that engages with culture. She is the Director of the Oxford Centre for Christian Apologetics (OCCA) and the Europe, Middle East and Africa Director of Ravi Zacharias International Ministries (RZIM), regularly speaking and writing in those roles.

Amy’s passion started at an early age, even though her family had been staunch atheists. Like his father before him, her dad was an academic and didn’t buy into religion at all. That is until he had “an extraordinary vision of Jesus while marking some papers in his study at home and fell on his knees”.

Amy’s mother became a Christian six months later, then her father got ordained and they became a church planting family. Amy remembers: “My sister and I grew up seeing that transformation in them and also seeing people becoming Christians and churches being planted – we were right there in the midst of it, undeniably seeing God at work.”

Amy recalls her interest in apologetics being sparked at the age of 10 by Josh McDowell (evangelical apologist and prolific author), when her parents took her to hear him speak: “He was doing his evidence for the New Testament and for the resurrection, and I was completely enthralled.”

Having prayed a prayer of commitment aged seven or eight, she recognises a “process of discipleship and decision-making” in her own personal journey of faith. As the only Christian in her secondary school (until “my friend became a Christian on the bus on the way home”); her parents and her home church were the major influences in her life, until she got involved with YWAM, where she had her first opportunities to preach.

“They had this thing called King’s Kids, which was taking teenagers on a three or four-week mission. When I was 15, we went to what was then Czechoslovakia, now Czech Republic. It was the year after the wall had come down, so Eastern Europe was suddenly open like it had never been before. Our hosts had previously been underground churches, but were now able to do public evangelism in Prague. We’d do some performing arts and then one or two of us would preach with a translator. The first time I preached the Gospel I was in Wenceslas Square with over 1,000 people there!”

Amy went on to study theology at Christ Church Oxford, where she recognises there was “a lot of pressure to change your views on certain things”. However, there was also a significant move of God while she was there (1994–1997), and literally hundreds of students became Christians. She met her future husband, Francis ‘Frog’ Orr-Ewing, at a prayer meeting. “We met regularly to cry out to God for world mission and then together Frog and I were involved in taking students on mission trips.”

It was while planning their first trip, to China, that they found they “massively connected”, becoming best friends and falling in love “all at the same time”.

Their second mission trip, in Afghanistan, happened at a pivotal time: “It was 1996 and the Taliban had just come onto the world scene after taking over about three-quarters of Afghanistan. We and our friend Miles felt strongly that we should go. The Oxford student newspaper said we were their Afghanistan correspondents, which got us visas (nigh on impossible at the time).

“The night before we left, I had a dream that we were meeting the Taliban leadership and giving them Bibles, so the day of our flight we went to Scripture Gift Mission and took four Bibles and 40 New Testaments with us.

“We ended up being there the day after John Simpson and the BBC team had left (they were making their ground-breaking documentary about the ideology of this new group called the Taliban).”

Amy had cut her hair drastically before leaving the UK and was wearing a headscarf, but felt it was unlikely that she would be able to meet the leaders of the Taliban, as they wouldn’t allow women into their presence.

“Initially they didn’t want to let me into their military headquarters. They wouldn’t meet with the head of UNICEF because she was a woman, so UNICEF had just pulled out. When we got there, the education minister for the Taliban met us and said no; but Frog said, ‘she has to come with us – we fear for her safety’, so they miraculously allowed me in.

“Miles and Frog interviewed the education minister, foreign minister and minister for religion about their views on everything and then shared the Gospel with them, and we gave them Bibles. We then waited to be killed, as they all had Kalashnikovs, but the keeper of the Holy Koran, the religion minister, took the Bible and said: ‘I’ve been praying to Allah for years that I could have this. I’m going to read it every day until I finish it.’ That completely changed the atmosphere and we lived to tell the tale.”

Amy and Frog may have expected to spend their lives as missionaries across the globe, but God had other plans: “We definitely did not imagine that Frog would get ordained, but we both had a very clear prophetic calling about this. We were called to serve the nations from here in the UK and we believed we should do what we would have done if we were in the Amazonian jungle or were missionaries in Afghanistan.

“Our first church (in Peckham) was so evangelistically focused and we actually had 400 different languages spoken as native languages in the parish. It was a massive adventure of reaching out to gangs etc.

“We are now between London and Oxford in Buckinghamshire. God gave us a vision to plant a minster church, to learn from how the Celts evangelised pagan Britain and to do it on a patch of land as they did. So, we have established a minster community. It is really holistic, with farming, learning, creation care, apologetics and mission teams sent out – and lots of food.”

Although there are hundreds of people now in their church, Amy’s focus is primarily on her work with the OCCA and RZIM. One of the projects she spearheaded is REBOOT, a global youth initiative.

Remembering how significant it was for her as a pre-teen and teenager to know “that the Gospel makes sense and there is evidence for it”, she says: “I think God has specifically laid it on my heart for secondary school aged kids – it’s such a critical age.

“We were doing a lot of university evangelism and seeing hundreds of students becoming Christians every year, which was so thrilling; but at the same time we were also meeting person after person who had some sort of church experience, but left because it didn’t make sense. We realised the ‘back door’ of the Church is wide open because no one could answer that question about why God commands killing in the Old Testament, no one could reconcile science and faith; or some terrible suffering happened and people had just said God loves you so ‘so and so’ will be healed – and then they died – and so they just lost their faith. It was utterly heartbreaking.

“In the Church we were not doing 1 Peter 3:15 (‘Always be prepared to give an answer to everyone who asks you to give the reason for the hope that you have. But do this with gentleness and respect’) so we were losing a generation. I shared this passion that we might start something and aim it at 12–18 year olds. We thought we’d get about 100 people – the keenies – but it has just grown and gone all over the world.” (The REBOOT conference in London in September saw 1,300 teenagers gather.)

Amy also recognises that there are lot of Christian teenagers in the same position she was in at secondary school – on their own. She comments: “We are sending them out onto this front line, but we’re not only failing to give them a breastplate or any sort of defensive weaponry, we are also not putting into their hands what they would need to build God’s kingdom in that context, and then we are disappointed when they don’t make it.

“We’ve got resources, but we need to get them into the hands of those heroic young people who really are on the front line, who do love Jesus, who would be able to do this if we would help them.”

Apologetics is all about engaging with the questions and issues that our culture is wrestling with today.

“The big conversation at the moment is around personhood,” says Amy. “This has lots of iterations. We could look at it from the social justice angle of the huge number of children growing up in abject poverty in Britain. What do we really believe as evangelical Christians about the value and dignity of the person?

“That same question of personhood affects gender violence. The statistics around objectification and sexual violence that young women in particular face, show 31% of female university students will experience some sort of sexual groping or assault. In broader society, what does it mean that women are human, created with dignity and value?

“Do we just determine our identity with words? Do you have to accept what I say about myself? What does it actually mean to be human? Why is life precious? If we look at secular narratives, we look at life having a meaningless, random source, the elimination of the weak by the strong, the survival of the fittest. There is no coherent intellectual basis for the sacredness of life in that worldview. We ought not to be surprised by the way that human beings are diminished in different ways in a society that is driven by that mechanistic, utilitarian view of what it means to be human.

“If we really believe that life has a transcendent source, that every human being is printed with the image of God, that speaks to end of life questions, beginning of life questions, questions around gender, sexuality, race, poverty. All of those issues seem to be disparate, but as Christians we have something to say and do that is unique and beautiful, and ought to be an apologetic to bring people to Jesus.”

Amy also has this comment about the UK Church today: “My feeling is that there is some despair in the Church. We are looking at declining church numbers and are focusing on mechanisms and systems. At the other end of the spectrum there are those declaring, ‘We are growing ever bigger and stronger’, turning the music up louder and the smoke machines on. I would ask: is Jesus at the centre? Is it Christ crucified and resurrected? Jesus actually offers us eternal life and transformation, as well as the people we are trying to reach. Where is the person of Christ in our churches? We need to fix our eyes back on him. Whether we are discouraged or triumphant, we have to bring it all back to him.”

Claire Musters is an author and freelance writer based in Surrey. Connect with her at www.clairemusters.com