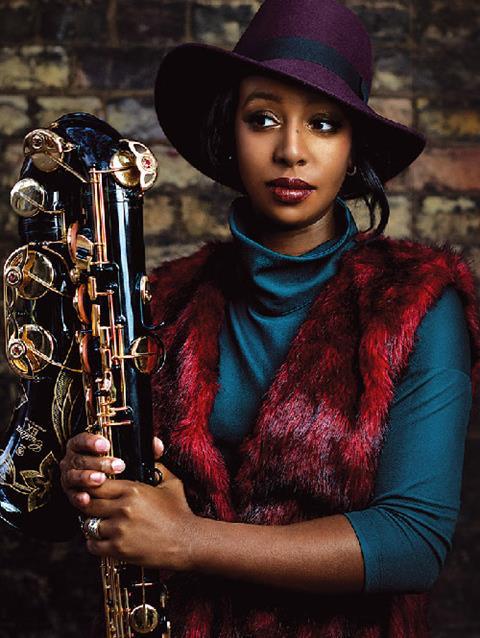 YolanDa Brown is bubbling – and no wonder. In the last three years she’s had a baby daughter, toured the US and is now coming to the end of the UK Reggae Love Songs tour.

“Yes, I’m one of those ambassadors for ‘life doesn’t stop when you have a child’” she laughs. Jemima is coming up to two, and has been an absolute blessing – she’s been on the road with me since she was three months old!”

The 33-year-old self-taught saxophonist on the UK iTunes Best Jazz Album of 2012 list, and her tours that year ended with two concerts at the HMV Hammersmith Apollo, backed by her full band and the Royal Philharmonic Concert Orchestra.

“As we toured the album it became more alive and we had to go back and record again. We had great feedback, particularly for the track Tokyo Sunset, and so we’ve chosen a reggae, jazz and soul direction, which we’re exploring on the new tour.”

So the 2016 Reggae Love Songs tour, explains YolanDa “captures everything that I wanted to express: love of family, love of friends I’ve lost, love of God ...” and the new album (as yet unnamed, and for release this year) will incorporate that.

Guest singers who have joined her for the tour include Lemar, Mica Paris, Michelle Williams (Destiny’s Child) and Shingai Shoniwa (The Noisettes).

Being a mum and having a family have clearly changed the way YolanDa approaches her music, as she explains:

“I do feel a bit more mature! I’m self-taught on the instruments so all I can do is speak and put my emotions through the music. Going through labour and sleepless nights, and having to work at the same time gives you a new story to tell I nd. I was nervous initially, and made a lot of plans – I actually toured America pregnant until I had eight weeks to go.

“I didn’t show, which was fantastic, and had no morning sickness, which meant I could keep going. There’s a song called Heartbeat which I had written with my nephew and it so happened every time I played the song Jemima would kick! I thought ‘It’s so surreal I’ve got this secret that no-one knows and this experience with the music’. I’m glad to think it’s affected me in a good way – yes, there are time restraints and the rest of it but it all seems to be working really well so far.”

Pregnancy and giving birth have had a profound impact on YolanDa’s faith. “It has made me realise how real God is. I’d done a lot of research about giving birth and scared myself, but I did a lot of yoga and Pilates breathing, and despite a 26- hour labour my husband says I didn’t scream once. All I remember is feeling a thin line between me and God, and thinking ‘God gave me this body to have this beautiful baby’.

“If you have any doubts – which I didn’t – just think this is what God made you to do. It did bring me much closer to him in my faith and understanding. I’ve got my trust in him.”

All this was helped by the experience YolanDa and her husband T had in choosing their daughter’s name. “A few years ago, going through hard times, my husband and I prayed with friends and were reading the book of Job as things got really tough. Things began to turn around and we got to the end of Job and found he had three daughters: Jemima, Keziah and Keren. I wasn’t sure about Jemima at first because I grew up with Beatrix Potter and didn’t want my daughter to be called Jemima Puddleduck!

“But God spoke to me and we decided on the name. We didn’t tell anybody what we had decided until I went into hospital, and the midwife pulled back the curtain and said ‘Hello I’m midwife Jemima and I’ll be inducing you today’! She looked at our faces and said ‘Is everything OK?!’ We said ‘We haven’t told anybody but that’s what we’re going to be calling our baby’ and she started crying.

“She’d been going through such a hard time in her life and to hear someone using her name let her know that God still remembered her. All of that in the whole hullabaloo of labour pain and the rest of it just let me know that God is always in control.”

And there looks like a good chance that Jemima will be musical herself ... “Well, we didn’t push anything on her – but she is so musical. She’s got a toy saxophone, bless her and really loves it. She is learning so much about music. She doesn’t just stand there, she moves around and loves to express herself. I’ve done a lot in music education, giving back to young musicians and so seeing my own child doing it keeps me going – it’s very rewarding.”

YolanDa’s band members are Christians (“we always pray before going on stage, as our way of giving back to God”) and she seeks out churches to worship at while on tour. She continues to forge an independent path in music, that enables her to stay true to her values, while also working with large distributors like Universal.

“It’s lovely to have a team that believes in what you do rather than trying to make you into somebody else. I continue to thank God who continues to bring these people around me.”