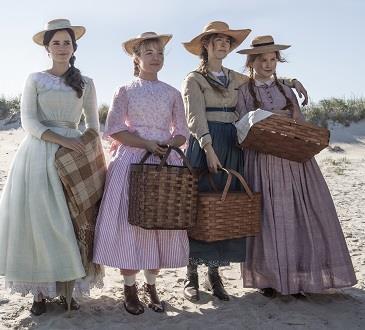 As we continue to spend more and more time at home, many recent big blockbuster films have been fast-tracked to DVD and download. Whether you know the story or not, the heartwarming nostalgia offered in the latest edition of Little Women doesn’t disappoint. Shots of giggling siblings, lace and bonnets suggest a simpler, happier time – but positioned against a backdrop of a society in which women were not able to make informed decisions about their destinies.

The film is directed by Greta Gerwig and stars Saoirse Ronan, Emma Watson, Florence Pugh and Eliza Scanlen. The matriarch is a role played beautifully by Meryl Streep and the central character of ‘Laurie’ by Timothée Chalamet. The well-known story is set in America after the Civil War and is a tale of four sisters coming of age.

A strong heroine with strong ideas

Gerwig brings creative licence by folding the writing of the novel itself into the screenplay, which differs from the original book. Making this move puts the story squarely in the camp of the film being about one particular woman, and it is therefore told from her perspective. Interestingly it’s set in a time when women didn’t write novels and the creative industries were governed by men… not that different to large proportions of the film-making world today perhaps?

The backbone of the story is that our heroine wants to write, she wants to be seen and heard and not kept by a man. She postures that her relationship with her creativity is her great love affair, leaving no room for anything else. She is compulsive and driven by the desire to write as though it were her addiction. Perhaps unsurprisingly, her great speeches throughout evaporate when she ultimately concludes that love is, after all, what she needs. Predictably she gets the man and the entirely satisfying career, a message that spells caution to many women today.

Is it not time to recognise that, while in some parts of the world women have officially been liberated, it is not as simple as us all being ‘better off’? We are being told we can have everything we want and make it work, but the old saying “be careful what you wish for” springs to mind. The reality is that any compulsion indulged to such a degree means a high price is paid somewhere else. Who can live in a world where they spend all day every day pursuing a creative pleasure for its own sake? And what would it look like to have no balance? Balance by its very nature demands sacrificing any form of extreme. Anything can quickly become a ‘god’ with a small g. As we all grapple with assessing our priorities, and recalibrate during these unprecedented times, we have an excellent opportunity to consider what may have become gods with a small g in our own lives.

Women report more stress and struggles with mental health since we have been told that anything is possible. Of course gender doesn’t dictate ability to excel in any area, but a film that ties everything up so neatly will reinforce a sense of needing to achieve in every area of life. But it is simply not possible to be in two places at the same time. We cannot be full-time parents, workers, daughters, partners or friends and have all of everything all the time! We are constantly bombarded by messages about smart consumer choices that buy us back quality time but, in reality, there is no such thing as quality time – there is just the time that we have been given. We must all set boundaries around, and protect, the many spaces we inhabit and hats that we wear – this is even more important now so many normal structures have fallen away.

As women of faith we are called first to be wholly satisfied by knowing Jesus. He demands absolute first place: “Seek first his kingdom and his righteousness” (Matthew 6:33). Neither a career, a marriage, a choice to be single or to have or not have children is the point. Modern life is often in opposition to scriptural truths. We burn out so easily as we overload and try to keep plates spinning – trying to squeeze many different lives and personas into one.

In Matthew 11:28 Jesus reminds us to “Come to me, all you who are weary and burdened, and I will give you rest.” And when the crowds had taken up so much of their time that they hadn’t had a chance to eat, Jesus said to his disciples: “Come with me by yourselves to a quiet place and get some rest” (Mark 6:30-31).

While we may well have varying talents, they are all given to us to offer back to God for his use in extending his kingdom. A life best spent is one lived wholeheartedly for him. That may well include creative outlets, but not in an all-consuming way that overshadows our first love and call. Do we ask the Holy Spirit what he would have us do more than we determine our own courses?

1 Corinthians 6:19-20 says: “Do you not know that your bodies are temples of the Holy Spirit, who is in you, whom you have received from God? You are not your own; you were bought at a price. Therefore honour God with your bodies.”

The above verses pack a punch in a culture that demands we seek first our needs and desires, along with our right to pursue our dreams above all else.

Little Women has some beautifully crafted cinematography and glorious fashion. So many of the amazing outfits have influenced haute couture today. The music and word play is excellent and such a joy to hear. There are some tremendous laugh-out-loud moments and many witty nuances that nod to the age-old human folly of falling in love. If you are after a blockbuster drama with highs and lows, but that is chiefly about love, it won’t disappoint and, indeed, will be a welcome escape to a feel-good world. However, let’s all remember that by no means does it do justice to the endless possibilities of what it can mean to be a woman who belongs to Christ.