A church for young people 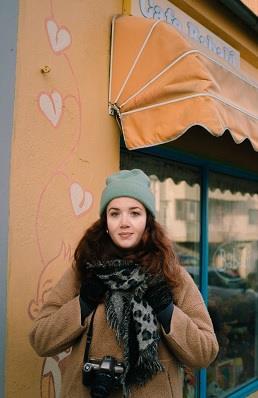 What did your faith look like when you were growing up?

My parents became Christians when they were in their 30s. My brother and I are also Christians but the rest of the family don’t know him at all. Growing up I remember loving being part of a church and having a range of friends from age three to 60! Having that extended church family was such an important part of my life.

Were you part of a youth group or ministry?

There was definitely some sort of children’s or youth ministry, but very different to what we do now. It was more like the classic Sunday school set up and I really enjoyed being a part of it. My dad ran a youth group; it was quite small but we had so much fun and I learned a lot – it prepared me well for working with youth!

How important is it for young people to have friends at church?

The teenage years are challenging for a lot of, if not most, young people. It’s a time where you’re trying to explore your identity and there’s a lot of peer pressure. Having friends who also share your faith can be a really strong support.

Sometimes when we look at people’s journey of faith, the teenage years can be a bit rebellious. Was this something you experienced?

I never really went off the rails. But it certainly wasn’t a straight path; I kind of wiggled along it. And so I never completely lost my faith. Having said that, there are times when I think, is this really real? But ultimately I’ve always had that knowledge of God.

When did you think you might want to start working with youth?

I always knew I wouldn’t have a typical 9–5 job. As a teenager I felt called into church ministry, although I wasn’t sure exactly what that would look like. I didn’t really know youth worker jobs existed back then. These days, there are youth ministry degrees and all sorts but, when I was at school, there wasn’t anything like that. When we had careers’ lessons and they asked what we wanted to do, I never had a conventional answer.

After leaving school, what did you think you were going to do?

I first got a glimpse of God’s plan for me walking on the street one day, aged 16, praying and asking God questions. I didn’t really expect him to reply, but I asked: “God, what do you want me to do with my life?” and God said: “Beth, I want you to plant a church for young people.” I thought: “What does that even mean?!” But it’s something that I’ve carried with me since then. I was planning to go to university but I knew I wanted some time out first, so when I was 18 I did a gap year with Soul Survivor, based in Watford. Soul Survivor have run Christian summer camps for thousands of young people every year. I learned so much about leadership and it was there that I thought: “I think I need to go and explore this a bit more.”

Was there anything else that really stood out to you in that gap year?

I ended up involved in homeless ministry. I remember walking into a room full of 50-year-old men – I was terrified! I felt very young and inexperienced, but it was an amazing journey and I learned a lot about just stepping out and giving people a chance. It helped me understand that everyone’s got their own stories to tell. Another thing that came with my understanding of leadership was how Jesus was such a servant leader and I really identified with that, after moving what felt like hundreds of chairs! As a leader you have to be so humble and follow Jesus’ example.

How did that transition into you doing youth work?

During the year, I had forgotten about that word that God had given me. Toward the end, I was reminded of it, and it was a lightbulb moment where I thought: “Youth work! That’s what I’m supposed to be doing!” I started randomly applying for a load of youth internships and ended up getting a job at St Stephen’s as their youth intern. I had to move closer to the church; it was a bit of a culture shock because Twickenham is a very wealthy area and I’m from up north and a bit working class. I seriously doubted I had anything to offer the kids. But I got to do some amazing things and I met some really lovely people.

You ended up staying at St Stephen’s for quite a while, didn’t you?

I did! As an intern I was working with young people aged 11–18, getting alongside the youth workers in the church and just learning how to do things. It was getting towards the end of my internship and I thought actually, I think I want to stay here, I really like it! And then they offered me a job. So I ended up having three jobs there – I was youth intern, youth assistant then associate youth pastor. Basically, when people left, I took on their jobs! I was only 21 when I became a youth pastor; stepping into leadership was terrifying, but God reassured me that I was in the right place. I think when he calls you into things, he puts it into your heart years before so that you have time to get used to and grow into it. Then when it’s his timing, he somehow gives you the strength and the right people around you to support you.

So after all of that, what made you think you would be going on a different path?

I think from that moment when God asked me to lead a church for young people, I always knew that that had to be somewhere in the path. So I started exploring becoming a vicar when I was 22. I had a meeting about it but decided it wasn’t the right time. Then a couple of years later, it felt like it was the right time. I know that it might seem that a lot of youth workers are becoming vicars, but I think this is actually a gift to the Church. It means we have a whole load of vicars really passionate about youth ministry – an area that some churches find difficult to grow and develop.

So are you currently thinking about that vision for planting a church for youth or are you waiting to see how things unfold?

I’ve been praying about it for years and I think God has revealed more and more to me. My vision is that it wouldn’t be a church full of just young people, but it would be a church that is for young people; really focused on them. And I want to gather together people that have that same heart to really minister to teenagers. It’s God’s plan; I’m just saying yes to him, so hopefully that will happen at some point. It’s been ten years since I first heard that call so I’m trying to wait patiently for the fulfilment of those promises, knowing he will guide me through each transition on the way.