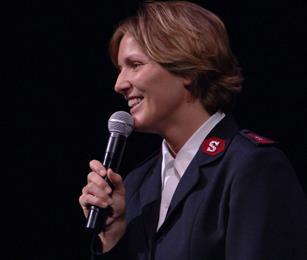 Danielle Strickland talks to Ali Herbert about her troubled childhood, finding faith and her calling to work among the poor

Danielle is a Canadian preacher and Salvation Army officer who has planted churches and set up anti-human trafficking ministries in several different countries. She experienced troubled teenage years before meeting Jesus in a jail cell and having the course of her life changed. She is married to Stephen, also a Salvation Army officer and they have three boys.

Can you tell us about your background?
My parents are Salvation Army officers so we did the ‘cross-Canada tour’ as I called it and moved every few years. As a kid I had a misunderstanding about who God was. I grew up believing him to be a taskmaster who was worried about my bad behaviour. My mom always said I was particularly gifted at being bad. Even at a young age I stole the offering money and then when I was about 12, I ran away for good, did drugs, stole cars, was a juvenile delinquent.

How did you become a Christian from that point?
I got in some serious trouble where I was remanded and it looked like I wasn’t getting out of jail for a long time. I was in a holding cell and a Salvation Army officer came in to see me. She was friends with my parents, but I had been estranged from them by then for a couple of years. She came in and I remember thinking, “Oh, here comes the lecture”, but she just gave me a hug, said, “I love you, here’s a lawyer’s card” and left.

I was unresponsive to the hug and even remember saying after she left, “You never even brought me a smoke!” I was just dead on the inside. After she left, I was by myself in the basement holding cell of the Toronto City Hall jail and Jesus showed up. I don’t really know how to explain it –  if it was a vision, it was a very tangible one. He hugged me, and said, “I love you”. It was an ‘aha’ moment for me, like someone turning on the lights in my life.

I came to my senses – very similar to the son in the story of the Prodigal Son. I still didn’t surrender my life to Jesus because I thought it was about my behaviour and cleaning up my act. So I gave it a go, got out of jail miraculously, went to a treatment centre, had a few relapses and finally realised, “Oh I get it … I can’t do it”. And that’s when I surrendered my life and let Jesus do some work.

How did you decide to join the Salvation Army?
Both my parents were rescued by the Salvation Army as orphans when they were young – so our story, our lineage is there. I also went to a Salvation Army treatment centre in Toronto when I came out of jail. The mission of the Salvation Army – the practical and spiritual side fused together – social justice, mercy and the Gospel together is tribally a part of who I am.
Did you become reconciled with your parents?

My dad was the one I was most estranged from and I don’t think we spoke to each other for three or four years. I finally surrendered my life at a Salvation Army meeting. I didn’t know my parents were there – although of course everyone had been praying for me for years.

I heard someone weeping behind me and when I turned around it was my dad. He said, “Could you forgive me?” and while it’s taken years to be completely restored, that was the beautiful beginning. He’s a preacher and tells the story saying that his great sin was in not believing that it was possible that I could change, because it was so hurtful for him to go through the process of being rejected by me.

Why is social justice so key to you?
I think there are a lot of things that line up to make that an inevitable place for me to land. I’ve chosen to journey with lower socio-economic folks, particularly women on the streets. And that will lead you to justice because if you love somebody and they are being oppressed, you want to end the oppression. Justice always starts in relationships. Then of course in my own life I can witness to the possibility of change: that even with addiction and sexual violence and rebellion – people can change, it’s never too late. All of those things have led me to justice.

The first step is to choose to see injustice – you tend to have to disturb the present-day peace in order to bring something better. I think for me it’s probably a natural inclination. I didn’t set a trajectory; I just did what was in front of me. My mum said I never changed speeds, I just changed direction!

You’ve spoken about comfort in your new book and how we need to fight against that – what do you mean when you say that?
It is the god of our Western culture. We’re dying of narcissism and depression, and anxiety and panic attacks over the colour of our walls. My own revelation was to not embrace the status quo. The last four years I’ve lived in the suburbs of Canada’s consuming city (Edmonton) – with the largest shopping mall in North America. Everything is designed for comfort, so you literally have to go the opposite way.

Before that, I opted out altogether and lived among people who were struggling – which gave me fuel for justice because you’re living amongst injustice every day. How do you rage against injustice when you don’t see it? When it doesn’t touch you? When your to-do list is ‘shop more’? I see the toxic influence of affluence – entitlement and greed. Comfort is death to the spirit. It’s a dominant culture, so how do we live a different way? We have wrapped Christianity and theology around these ideas of prosperity, which is nowhere to be found in Scripture. I’m frightened at what that means for the Church.

Your new book is called A Beautiful Mess – what’s that all about?
It’s the best definition of what I do. I’m not pretending to have everything together. My ministry is always a beautiful mess – it’s amazing and horrible. This is where we’re heading … but we’re not there yet. We do a lot of pioneering and if you’re addicted to order, then you can’t pioneer because it’s all about mess and journeying through mess, and seeing the beauty in it and embracing where God is in it.

In my book, I talk about how God often throws our lives into chaos in order to bring the high places down, to toil the ground because it’s hard ground – it’s orderly, but it’s dead. So he creates chaos and we’re protesting “Argh, we’re in chaos, I must have done something wrong!” But if your life’s in chaos, then it probably means you’re on the brink of something right.

Is there a particular ministry you’re involved with at the moment?

We have a beautiful ministry emerging in Edmonton. Every night of the week 9pm–3am we have a street outreach team – all volunteer-led – with 100 people from different churches doing different nights.

We set up a 24-7 prayer room for a year and we’ve gone from two nights a week with a few volunteers, to every night of the week, plus afternoon brothel visits and a ministry house. We have a van like a portable living room and we offer practical help and prayer. Our aim is to be a presence on the street, but also to get the women off the street. They need food and clothes, but they need a whole lot more. We need to be practical, but the harder thing to go for is the soul.

Do people ever refuse to be prayed for?
Every so often someone will say, “No thanks, but thanks for offering”. Most people say “Oh, yes please” and almost always they have requests. Now the women ask us before we ask them because it’s such a part of the ministry! They just get in the van and say, “Would you pray for me?”

People often seem to think that the Church is judgemental and that it has become divorced from what Jesus taught and how he lived his life. Has that been your experience?
I think what happens is that when your faith is dead it is repulsive to everyone – even you. When your faith is alive, it’s attractive and Jesus-like, and has a beautiful aroma. Recently, a woman did a student placement with us and it was a life-changing experience for her. Her faith exploded inside her and she told her friends, and now they can only come once a month because there are so many volunteers from that church! What they discovered was that when they went out God showed up – in them even. All of a sudden their faith came alive.

So the women volunteering on our van have a relationship with these women on the streets and, as a result, their faith has come alive so they represent Jesus really well. They’ve found outreach to be the best discipleship tool – it’s like the barriers have collapsed for everybody.

Do you get much time to just hang out with your family?
We have three boys who are 12, five and two – so it’s a party! I’m a story-teller, so I love hanging out with my boys watching movies – my two-year-old can’t talk, but he can sing the Star Wars theme!

What do you have coming up?
I’m developing some stuff with Compassion, hoping to take some leaders with me to Developing World contexts to learn from the leaders there how the Kingdom is so alive. Often we have this very paternalistic idea of how we’ll go and save the poor people, when actually on a Kingdom level they are way ahead of us in terms of faith, expectancy and dependency on God. So, yes, we want to share in terms of resources and money, but when it comes to Kingdom and what it means to live passionately for God, we need to learn from them.

What would you like to say to the readers of Woman Alive?
I think the time has come to ‘walk out’ what we know to be true. Start with what’s in front of you. There’s always someone on your mind you meant to go and visit, or a neighbour you’ve never met – now’s the time to go introduce yourself, say who you are and invite them over for a coffee. Perhaps you saw a ministry and thought maybe you could help, and it’s on your to-do list? I’d say just get to it, phone them up and start. It’s always the hardest part beginning, but if you can do what’s in front of you, then it will go somewhere …

+ For more info about Danielle go to www.daniellestrickland.com
For more information about the Salvation Army in this country go to www.salvationarmy.org.uk