In our rush to get back to ‘normal’, are we leaving behind the most vulnerable once again? Veronica Zundel asks 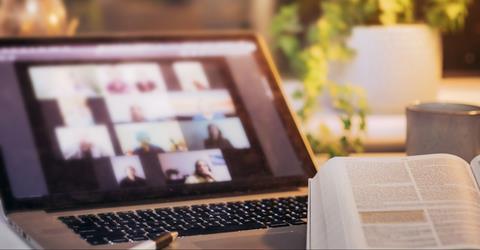 There is a short story, The Machine Stops, surprisingly written by EM Forster (who came to visit my family once, but that’s another story). Surprisingly because it is essentially science fiction, not a genre he normally wrote in. In this prophetic story Forster describes a society where humans have lost the ability to live above ground (perhaps a foreshadowing of climate change or nuclear Armageddon, though neither of these were on the horizon then). Instead they live in individual underground cells and communicate entirely through audio-visual technology. The story focuses on a mother who hasn’t seen her adult son ‘in the flesh’ in years, and on what happens when ‘The Machine’, which powers all this technology, breaks down. The most amazing fact about this story is that it was published in 1909.

As we emerge slowly from the pandemic, as churches begin to meet again in person, and bigger gatherings become possible, this story has been much in my mind. There are plenty of voices around who lament our reliance on the internet and social media for human contact, and who rejoice at being able to hug and sit close again. But I don’t think it’s really that simple.

The other day I read a piece by a fellow writer who is housebound, indeed bedbound, by ME. She was questioning the idea that churches should now stop their Zoom or streamed services, as people could now come back to the church building. For her, this was an impossibility long before COVID; she simply didn’t have the energy or mobility. Instead, online Sunday services, prayer meetings and home groups provided the first opportunity for her to join in church activities for years. And this is especially poignant when one considers that as a ‘clinically extremely vulnerable’ person, her normal visits from a friend or two at a time would have had to stop during the pandemic too.

One thing she pointed out was that, contrary to what some people suggested, when she took part in an online service, she was in fact still worshipping with her body – not in close proximity to others, it’s true, but still engaging her whole self, even if in a reclining position. I am not in her situation, but recent mental health problems have made it more of an effort to go out, and for me the online prayer meeting, the FaceTime therapist sessions and the Zoom poetry groups have been my social lifeline. They have their limitations, but without them I could become totally isolated.

For older people who can no longer physically get to church, or for those with agoraphobia or just plain exhaustion, technology and social media can be a lifesaver in their emotional and spiritual lives (even if their grandchildren have to set it up and show them how to use it). I think we should be grateful for new technology and all the opportunities it gives us. As I have probably said in this column before, television didn’t, as we were warned, kill the art of conversation – it just meant we had conversations about TV programmes instead of other topics! No doubt when the telephone was new, people said it would kill the art of letter writing – and indeed to get a ‘real’ handwritten or even typed letter is rare these days. But isn’t an email just another form of letter? And you can keep it to revisit it as often as you want too.

My son has a new job, in fact his first job (at 27, which isn’t as bad as it sounds considering he only graduated at 25 and then COVID struck). He provides technical support for a local council’s adult learning facility, making sure that hybrid learning – some students in the classroom, some online – works as it should. Although getting used to the discipline of daily work is hard for him, he clearly loves what he does and it certainly uses all his core skills. Perhaps we should be thinking about how to run ‘hybrid church’, not just for Sunday worship but for all our church activities? It would need some adjustments and some careful thinking, so as to avoid creating, effectively, two congregations. But it could be a way of including those who are often excluded, who are in our prayers but not in our sight. There are times when ‘The Machine’ must stop, but perhaps we could also harness ‘The Machine’ for our own benefit.