We don’t need a ‘Christian alternative’ to Wordle 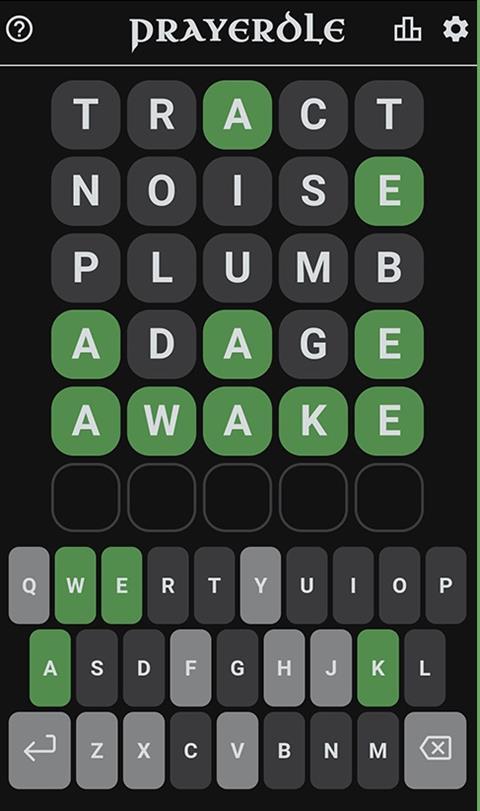 You may have heard of a certain online word game that has grabbed the attention of social media surfers worldwide (it’s called Wordle for those unaware). Each day, a new word is posted – players have six attempts to guess it, they put in a first guess and are then told which letters are correct, try again until hopefully guessing correctly before their attempt quota is up. Only one word is posted per day, which helpfully minimises the time wasted to a few minutes. Although for those of my age group, exercising the little grey cells to avoid losing them is perhaps not a waste of time but a useful discipline.

The creation of ‘safe’ alternatives

What has made me want to write about this, however, is the rapid emergence of a ‘Christian alternative’ called, rather naffly, ‘Prayerdle’. It’s not as if the original is a hive of swear words and millennial slang, but with the Christian game you can guarantee that you will only encounter holy words – in other words, Christian jargon. The naughty part of me wonders what would happen if you played the Christian version but put in the rudest words you could think of as your trial words.

What is this Christian obsession with needing a ‘safe’ Christian version of every cultural phenomenon the world can offer? Christian music, Christian novels, Christian bookmarks and notepaper. I can understand the desire to fill our minds, as Paul exhorts us, with whatever is honourable, just, pure etc, but never forget that the first word in that list is ‘true’ (Philippians 4:8-9). I’m a sucker for an Amish bonnet romance, but if I only fill my mind with happy ever after endings and the villain getting converted on the penultimate page, I am hardly furnishing it with what is true. Life is a great deal more complex and unresolved than that.

The Bible itself is hardly ‘Christian reading’ – quite apart from the fact that three-quarters of it wasn’t written by Christians. It is packed with violence, illicit sex, frankly embarrassing bodily references and all sorts of unhappy endings. Yes, everything does work out in the end, but it’s only after a great deal of struggle and sacrifice, and it’s made quite clear that this particular happy ending is still in an unspecified future. I honestly think that if the Bible were published for the first time today, an awful lot of religious people would recoil in horror at this mix of religion, sex and violence.

How little faith we must have, if we think that reading a ‘heathen’ everyday word, or a story of unpunished sin, will destroy our assurance of salvation instantly. Do we not believe that the “One who is in [us] is greater than the one who is in the world” (1 John 4:4)? Yes, the epistles are full of exhortations not to love the world or anything that is in the world. But consider how Jesus actually lived: he didn’t spend all his time with the holiest in the land, doing ‘spiritual’ things with them and keeping himself pure. Rather, he mixed with those who were considered the dregs and scum of society. He broke the Sabbath and purity laws repeatedly, and seemed so unconcerned with his own reputation that he was willing to die a shameful criminal’s death. He never appeared to be afraid of being contaminated by ‘the world’ – rather, he seemed to think that it was holiness, rather than sin, that was contagious.

If we keep ourselves hidden away in a Christian bubble, what common ground will we be able to find with those we seek to reach with the good news? If we have our own special language, our ‘untainted’ music, literature and art (often rather bad), what are we doing other than excluding those who don’t know the codes and might not fit in? If we are so heavenly minded that we can’t even play an everyday word game, what earthly use are we? As for me, I will continue to risk being corrupted by guessing dangerous words like ‘tapir’ and ‘renew’ – the very thought of only playing a Christianised version of Wordle, where every word has to be sacred jargon, fills me with dread.

We are surely better and stronger than this. We don’t put on the whole armour of God (Ephesians 6:10-17) only to huddle terrified below the battlements – the whole point of the armour is to protect us when we do go out into the world.