The Handmaid’s Tale: When fiction mirrors the ugly truth

With the latest series of the hugely popular TV drama having recently drawn to a close, Veronica Zundel reflects on the horrors it reveals about worldviews regarding women 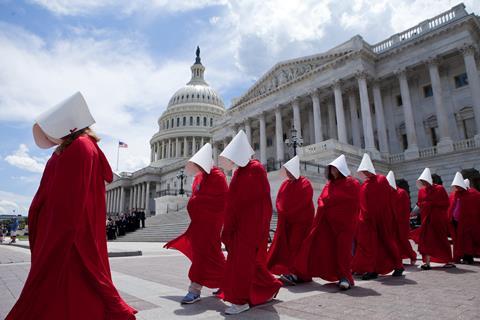 “Now Sarai, Abram’s wife, had borne him no children…she said to Abram, ‘The Lord has kept me from having children. Go, sleep with my slave; perhaps I can build a family through her.’…He slept with Hagar, and she conceived” (Genesis 16:1-4a).

One thing strikes me immediately in this story: there is no indication at all that Hagar or her successors – Rachel’s servant Bilhah and Leah’s servant Zilpah – who both bore children to Jacob, had any opportunity to give or withhold consent to be used as baby machines. So many women, in scripture and beyond, are silenced.

It is the taking away of their rights and voices that is reflected so powerfully in TV drama The Handmaid’s Tale, based on Margaret Atwood’s book of the same name. The fourth series ended powerfully – and brutally – at the end of August. This show has gripped viewers since it first aired back in 2017, mainly because it portrays the terrible abuse of women in the dystopian setting of Gilead in graphic detail. Indeed, some viewers have found some scenes too distressing to watch.

“Ah,” you may say, “but everything’s different in real life. Women have rights and choice.” In developed Western societies, perhaps, though a woman in an abusive relationship still has little freedom and there are still shocking statistics as to what goes on in our ‘civilised’ nations (such as the practice of female genital mutilation in the UK, despite it being criminalised). In much of the world, the plight of women is hardly different from biblical times.

Gender injustices around the world

The world has watched in horror as Taliban rule returned to Afghanistan. Women must now cover up completely, as though being female were the most shameful thing (even posters of women’s faces are being blacked out). Just last week, after the Taliban announced its interim cabinet of ministers – notable for its absence of females – Afghan women bravely took to the streets to demonstrate peacefully, demanding the right to work and education. The Taliban’s response was to whip and beat them – and the Afghan journalists who covered the story.

We may also want to protest, with placards saying: “Make Gilead fiction again.” Indeed, women around the world have utilised imagery from the TV series to highlight inequality. In US and European cities, protests have seen women dress up in the distinctive red ‘handmaid’ costumes with white head coverings. Even here in the West, everyday sexism and harassment are rife.

When her book came out, Atwood stated that there was nothing in it that had not happened in the real world, and since she is closely involved with the TV series I assume the same can be said of that. Literally plucking out the eye of someone who has offended (though in fact Jesus never counselled his disciples to pluck out anyone else’s eye, and in any case he was being metaphorical), using female genital mutilation as a punishment for misbehaviour, stoning adulteresses or suspected adulteresses (but rarely male adulterers), rape as a weapon of war, kidnapping of girls and women as sex slaves – all these things have happened and are happening in our contemporary world.

What is the Church doing?

What bothers me most, however, is how churches are responding – or failing to respond – to the abuse of women. When have you heard a sermon addressing this issue, though there are many biblical stories that are relevant (the stories of Tamar and Dinah, as well as Judges 19, spring to mind)? Instead we get the same tired debates about ‘headship’, women in church leadership and whether a male minister can meet alone with a woman.

Friends, we can do better than this. Patriarchy, the rule of men over women, is clearly a negative result of our fallen world (Genesis 3:16), and in God’s kingdom it is to be reversed. We are handmaids of God, not of men.