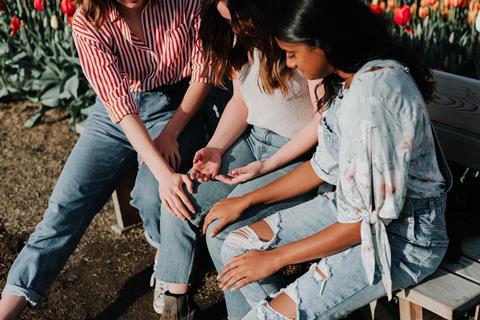 My sister has suffered with depression for years. I remember an occasion of praying with a friend for my sister and God gave me a tongue. It sounded Chinese; I had never had anything like it before. I felt that it was warfare, that I was telling the enemy to back off. Something shifted from then. People with her type of depression can have it for life, but she has been transformed. It is amazing and all glory to God.

A house hand-picked for us

My husband and I had been praying about where to move with our three young children. We felt really peaceful about one area near Chichester. We had a few Christian connections in the area, and felt excited about joining in with them. We began the house search, and then the house market went mad!

We were given details of a solicitor and discovered she lived in Bosham, near Chichester. We had looked at houses in Bosham, and there was one house on a particular road that my husband kept harking back to (it was off the market by the time we called them). We wished we had been able to see that house, and loved the road it was on. We called the solicitor to sell our house, and amazingly she said she lived on that same road, so my husband asked if she was thinking of selling! She said they had been, but were not anymore as they needed something specific to come up, because they had domesticated rescue pigs in the garden. We asked for a video tour of their house, but they said no, as it wasn’t the right time.

The next day we got a call saying that something had just come onto the market that they thought was perfect for the solicitor and her family (it even had a pig washing station!) so they gave us a video tour of their house. We had written a list of ten practical needs we had and ten dream factors for a house. When we viewed the house via video we saw it ticked all our practical needs, and nine of our dream list, which we thought was pretty good! We then discovered the owners were part of the church community that we were wanting to join, and the husband was headmaster of a local secondary Christian school!

My husband and I began to pray. Their house went on the market and we had to wait to see what would happen, but we kept believing that it would come to us…and it did. We moved into our new home in June 2021, having first seen the house in the February – all during COVID! We believe it is God’s provision for us, and that he has a plan for us in this new community.

On the first day of a group mission trip to Kenya, we were travelling in a mini bus when the driver pulled over, as he had bumped into a friend. While they were chatting, I noticed that his friend was with someone who looked like he may be blind. I leaned out of the window, and asked what was wrong with his eyes. We then asked if he would like prayer, because Jesus is a miracle worker and could help him see. The man wasn’t a Christian, but said yes please. It was at this point that we saw that of one of his eyes was no longer visible. He had had an accident many years previously. We had already offered to pray for him, so I just thought: “Well God, a miracle is a miracle, over to you!” It was scary, but we reached out our hands and started praying for him. We then watched as his eyes started to physically change. He began to say that he could see light and shadows, which reminded us of the passage in scripture where Jesus prayed for the blind man. We prayed again, and he started to see shapes. We began to see the beginnings of a pupil in the middle of his worst eye! We prayed some more, and then invited him to join an event we were doing the next day. He came along and we prayed again, he gave his life to Jesus, and his eyeball grew a pupil and an iris. He could see and count numbers on people’s fingers. I had never seen a miracle like it in my life, it was stunning!

From broken toe to dancing feet

I work for Oasis Church in Colliers Wood. We do outreach twice a week near St George’s Hospital. Recently we were out on the streets praying for people. A lady came by and we asked if she wanted prayer for anything. She said yes, she had broken her toe, but had come out of the hospital because they couldn’t help her, and it was really hurting. We prayed and God healed her on the spot! She started jumping up and down and her face changed from being so down to so happy – it was like a light switch. We got to share the love of God with her, and she left dancing…literally!

My husband and I have been ministering in a Xhosa township in Cape Town for the last 13 years. For several years we were on a ministry team with locals and internationals that would meet to prayer walk and church plant in the community. One day as we gathered I was sharing about a dream I had had the night before of a man that followed us with an aggressive dog that was attempting to bite us but couldn’t. One of our Malawian team members sensed that God was warning us of a potential crime that he would protect us from. We prayed into this then continued on to the community to prayer walk and share Jesus with locals there.

During our prayer walk we began to notice that we were being followed and soon were backed into a corner by two men, one holding a dog on a lead. As this man attempted to rob us, we noticed the dog and were quickly reminded of God’s promise to us in the morning. We immediately felt peace in the midst of a dangerous moment. The man became frustrated as he kept moving toward us, but was unable to touch us. He finally gave up and said in the local language: “this doesn’t normally happen to me” before leaving us.

Later that week, we came in contact with him again. We walked with him and asked if he could take us to his house to meet his family. As we arrived, his dad came out to ask us if we had been robbed by his son (we later discovered he had a very bad reputation in the community for violent crime). We were able to share how we met him, and spent time praying with them as a family.