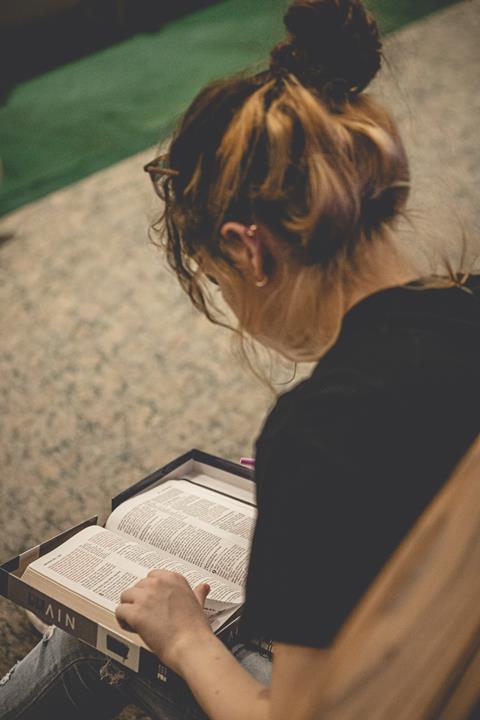 I went on an Alpha course while at university. I hadn’t been that happy on the course, but there was something compelling me to go back each week. They asked us as a group if there was anything they could pray for. No one was saying anything, so I decided to say something in order to break the slightly awkward silence. My brother had just had an accident and fallen off a roof. There was a possibility that he wasn’t going to be able to walk again, or do any load bearing that involved his foot, because his ankle had been completely smashed. I told them about this with absolutely no faith or hope that anything would happen.

I went back home at Christmas and told my brother that I had asked them to pray and that he should pray too. He was a bit reluctant, but decided there wasn’t much to lose. I prayed for him, which was the first time I had prayed, and really had a sense of God’s presence (although I didn’t recognise it as such at the time).

The next day my brother had to go to hospital, which was the day after Boxing Day, for the results of blood tests and X-rays taken on Christmas Eve. Mum took my brother to hospital, while I stayed at home. She called me a bit later to say: “It’s a miracle!” The surgeon had looked at the X-rays and found something significant had changed. This meant that the blood transfusion he was meant to have, which was quite risky, did not have to happen. It also meant that the whole recovery was much better than expected. When I had prayed, I had said to God: “If you answer my prayer, then I will follow you.” He was gracious enough to do so, and it was the beginning of my faith journey.

God’s provision for my family

In October 2021 I went for a job interview. My husband and I had been praying about financial provision for us as a family. I felt that I was going to be offered the job, and that it would be financial provision for us, but I didn’t have peace about the job. I had a weekend to decide if I would accept it if they offered it to me as they were interviewing someone else on the Monday. I knew we needed some provision for our family, because money had been tight. So I prayed, and wasn’t offered the job. But amazingly, we got back from holiday that week, and came home to an envelope through our door with our names on. Inside was a substantial amount of money. It was wonderful provision for us, and I felt God saying that I don’t have to work for him to provide for us. My role in the family is really important, and he needs me at home for my three young children. Since then, we have had other financial provision – we have been blessed with some oil for our heater, and we were given some supermarket vouchers on two different occasions. God is taking care of us, and I am learning that I don’t have to worry about not having enough.

I was at church in late November 2021, and bumped into a friend who had had COVID. She still had symptoms, the main ones being restriction in her breathing and pain in the bottom of her right lung. She asked me to pray for her, which I did. As we were praying, I felt God’s presence. She noticed a difference straight away, as well as the presence of God really touching her during the prayer time. She was completely healed; the pain left her lungs and she felt her lung capacity got bigger too!

I went to the Open Skies worship conference in Antrim, Northern Ireland in 2017. My back had been causing me quite a bit of pain. There was a tent outside the big top where they were offering prayer, so I went to get prayer for my back. However, what those ministering found was that my left leg was shorter than my right one. They prayed and I saw my left leg literally grow – it was amazing! It helped ease the pain in my back, but mysteriously my back is still not completely healed.

On 31 October last year my husband, JJ, our baby, Elijah and I went to join in a church Halloween evangelism event in Norwich city centre. It was a really cold afternoon and getting dark. We met a young man walking with a backpack. We started talking to him and found out that he had come from Portugal to look for a job here in England. As I am Brazilian, we spoke the same language. We shared the gospel with him, bought him dinner and prayed for his job interview the next day. JJ called him and went to see him two days later because it was his birthday. It was super encouraging to find out that he had been offered the job! How special it is to be able to be the hands and feet of Jesus to someone in such a simple way. Please keep praying for him as we continue to build relationship with him and share the love of Jesus.