People often joke about the “flirt to convert” evangelism technique, but here Lillie Sutherland explains that even though her boyfriend encouraged her to explore faith, it was God’s words that convinced her to follow Jesus.

I didn’t grow up with a Christian faith. But I had grown up with the idea that there was something more to life. My family are not particularly spiritual (except for my wonderful mum and nan), but we all spoke about souls and “the universe”. I didn’t have a complete aversion to a higher power. 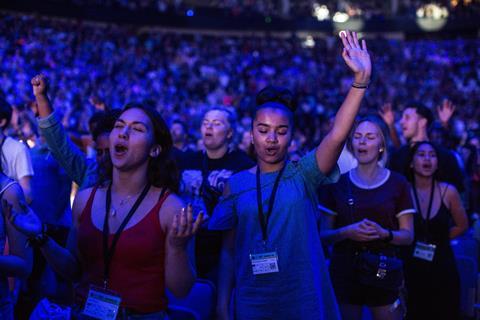 This context is important for my story for a couple of reasons; firstly, as I am now a Christian, I can see that God had used every moment in my life in perfect step right up to the time that I decided to follow him. Conversations about a faith in all its forms with different people that I loved throughout my life had been purposeful, pre-written, and part of my story. Second, I do not suppose I would ever have entertained a relationship with a Christian if I did not already consider myself to have some sort of spirituality.

At university I met my (now) boyfriend who, in the first two sentences, told me he was a Christian. I had an image of what Christianity meant and had decided a while before that, while I believed in a higher power, I didn’t believe in a man in the sky. Despite a potential faith clash, I also decided that I really liked this guy and we started dating.

I had an image of what Christianity meant and had decided a while before that, while I believed in a higher power, I didn’t believe in a man in the sky.

He shared what Christianity meant to him and answered the millions of questions I had. The image of Christianity I had wasn’t a true reflection of my boyfriend’s faith, and the more we spoke the more intrigued I was. I read books and watched online preaches but after a while the head-knowledge pursuit ran its course. While I agreed with some aspects of the faith, I still had doubts about others. I could stand in admiration for my boyfriend’s faith, but I never thought I could truly believe it.

Then came the inevitable time in all believer-non-believer relationships when I couldn’t ignore his invitations to church. I was suprised by how emotional I felt during the service. The emotion was so tangible and that kept me intrigued. That summer I went to a Christian festival – truthfully, only went to spend more time with my boyfriend. But I also spent time listening to preaches, talking to other Christians and worshipping - but I felt nothing. There was distance between me and the God who I thought would want to meet me at this festival. If there was a time for him to show up, it would be now.

On the last evening I was chomping at the bit to leave, but the worship band decided they wanted to extend the session as they felt God was moving. In a huff, I sat on the floor and looked around for my boyfriend - maybe if I caught his eye, I would be able to signal that we should go. But he was praying for someone else.

I was totally overcome with love and joy and a realisation: Jesus is real.

As I sat and waited, a couple approached me and told me they had a word from God they felt was for me. They shared a story that told of how God saw me and heard my desire to be seen by him. They shared an exact response from God to my cries of frustration to him over the weekend. I completely broke down in tears. How could they know? The only way was if God told them. I was totally overcome with love and joy and a realisation: Jesus is real. He hears our prayers. He talks to us. In that moment I gave up my feat of a head-knowledge pursuit of Jesus. I knew in my heart that He was real.

I came home from that festival and went straight to church, and I have been figuring life out with Jesus ever since.

Lillie SutherlandLillie is a law graduate, aiming to move into the world of publishing. She is currently managing her family’s kennels and cattery and growing her portfolio through freelance writing.