Are you hearing from God or the enemy? Or are you simply listening to your own heart’s desires? Amy Boucher Pye shares her top tips for discerning the still, small voice of God.

In my twenties, I put some plans in motion to move from one side of America to the other because I believed had God told me to. I thought he was saying I should uproot my life to work with a Christian organisation and – probably more significantly – to marry a certain man who conveniently lived in that city. 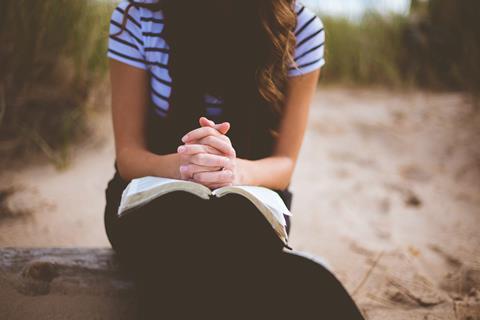 Those plans came to nothing. In the space of a weekend, the organisation said it didn’t have a job for me and the man ended our fledgling relationship. I was devastated – but more so for not having heard God than for not moving cities or marrying the guy.

Now, I heartily believe that our loving God does communicate with us. More than we probably realise. But in this case I wasn’t hearing him. I was hearing the desires of my heart to belong to a loving community and to be showered with love and affection by an adoring mate, and these were crowding out God’s still, small voice. This major disappointment rocked my world, but through it I started to learn how to discern when I was hearing God and when it was just me.

How can we know when we’re hearing God and when we aren’t? Here are four ways to test whether what you’re sensing is from the God who loves to speak to us.

1. It syncs with God’s word

Perhaps this first point is the most obvious, but it’s worth stating right away. God never contradicts his word. He’s always consistent and never changes, so when we sense his still, small voice, it will always align with the words of Scripture that he revealed through his Spirit many centuries ago.

We, of course, need to learn how to exercise wisdom and maturity as we read the Bible, asking God to enlighten us as to his truth and how to apply it to our lives. I like to discuss Bible passages with other Christians as I weigh up whether or not God has been speaking to me through them.

For instance, some years ago I sheepishly shared with a friend that I wished Jeremiah 29:6 was a word from God for me (“Marry and have sons and daughters…”). She hugged me, but we agreed that in this instance, it was probably my desires fuelling those words to jump off the page and not God’s Spirit.

God may catch our attention with a clear message. Once when I was on a retreat I heard four simple words that stopped me in my tracks (as I share in the opening story to the chapter on hearing God in 7 Ways to Pray). I didn’t welcome those words – they were opposed to my plans – but I immediately knew they were from God because of how clearly they came to me. They had landed in my mind and heart, and I simply couldn’t ignore them.

A clear message from God may be rare, but it will often appear unexpectedly and quickly. We might feel jolted and startled, but we sense that we’re standing on holy ground. As we obey God and his message, we’ll find peace and an assurance that we’ve heard him. And in looking back, we can see that the clarity of the message was a hallmark that it really was God we were hearing.

One of the big challenges in hearing God is discerning whether we really are hearing him, if our desires are driving our thoughts or if we’re being influenced by the evil one. We can usually discern between God and Satan because words from God leave us feeling peaceful and light, whereas the evil one makes us feel disturbed and restless. The content of the message usually guides us between God and his foe as well. God’s message will build us up, while the evil one will tear us and others down. But how can we test whether our desires are fuelling what we think God is saying?

This is where we need other mature Christians to help us test out what we’re sensing. We can easily have blind spots when it comes to the deep desires of our heart, just as I did with the job and the man. Had I heeded the warnings of an older mentor to cool my enthusiasm, I would have saved myself a fair amount of disappointment and hurt.

Words from God will make a difference in a person’s life; ike those four words I heard on the retreat, which turned me from chasing a dream that wasn’t God’s intention for me or my family, and resulted in me having greater peace and being able to serve others more effectively. The effect may be more long-term like this, or immediate, such as when we feel drenched in a gift of peace and calm or the assurance of God’s love.

When God speaks to us and we obey him, we will bear the fruit of the Spirit. We will be more loving, peaceful, joyful, patient, kind, self-controlled and gentle. We’ll gain humility and wisdom. We’ll become more like Christ.

Amy Boucher PyeAmy Boucher Pye is a writer, speaker, and spiritual director. She writes devotional thoughts for several publications including Our Daily Bread and New Daylight. She is the author of several books, including 7 Ways to Pray (NavPress/Form) and Celebrating Christmas (BRF). She blogs at www.amyboucherpye.com.