We discovered Tina RoseLawless via her Instagram account (@TinaRoseLawless). Enchanted by the photos of Tina in high-end fashion, her beaded creations and colourful style, our editor Tola-Doll Fisher was curious to find out more about the woman behind what is fast becoming a signature brand

At 5’1, Tina is more than a foot shorter than me and yet the gigantic hug she proffers when we first meet is typical of what I quickly understand to be her natural, all-embracing warmth, and her larger-than-life personality. 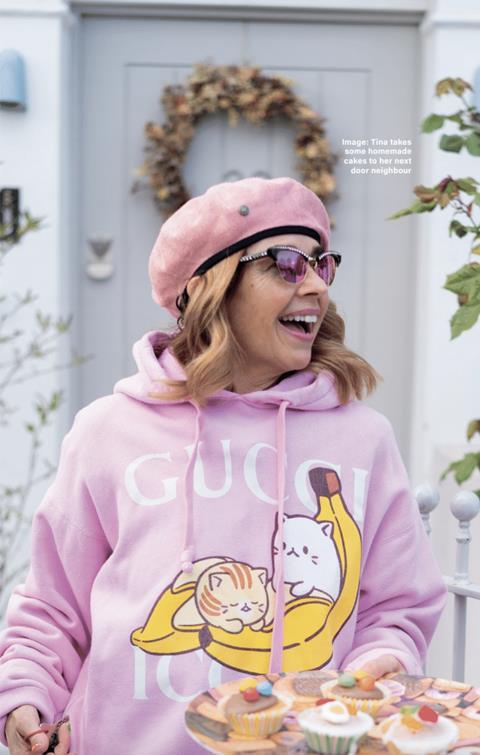 Giving colour to others

When I ask Tina about her colourful beads, her face lights up: “I started making them last year [2021] in lockdown. I ended up in hospital in a brain unit for ten days after I got the COVID vaccine and then a wheelchair for three months. They thought I had a tumor soI had to keep going back for more tests but I just kept passing out.” Tina says this almost in one breath as she hurries to what she sees as the most significant part of this story: “So I had to slow down, but I missed work [she’s a stylist at fashionable Dover Street Market, London]and being creative. I needed something to do. Then I had a dream about these beads and that’s when I started making them.”

It might seem crazy, that her response to being so ill was to find something else to do with her time, but this is Tina all over. “So many people are lonely!” she exclaims when I quiz her about this. She tells me about going to the nursing home to see her mother, who had Alzheimer’s: “My mum was 85 and on a ward not many people came out of. Many of them didn’t know Jesus and they were so scared. Back then I started making these little bracelets made of gold elastic and each had a little cross. I gave them away.” She recalls: “I gave one woman a bracelet, told her about Jesus and she cried. But when I visited the nursing home the next day, she didn’t have her bracelet on and said, ‘My son won’t let me wear it.’ It was really sad but I told her: ‘You don’t have to wear the bracelet to know Jesus loves you!’ and we talked even more about it.

Tina is persistent in sharing the good news about Jesus and there is no doubt that he is present in every area of her life. She says: “I was married at 19 and we had five children [theynow have six] before I became a Christian [at36]. I wasn’t brought up in church, although I’m sure my dad had a faith. He was an orphan, brought up by the Salvation Army and I think they had a real influence on him.“We were living in this farmhouse with a smallholding; it was a madhouse really,” she laughs unashamedly: “[her husband]Sam was always away with work so it was just me and the children, their friends, rabbits, guinea pigs, goats, chickens, ducks –and we always had dogs. We had a neighbour who was so kind; once when I was sick, she came around with paracetamol and flowers forme and spaghetti Bolognese soI wouldn’t have to cook. No one had ever done something like that for me before!”

Tina later found out that she was a Christian, but also that she had lost a daughter to measles when she was just three years old. Tina says:“One thing that fascinated me was that she loved Jesus and I said to her how can you love Jesus when you’ve lost a baby? She said to me, ‘You have two choices: you either fall in love with Jesus more or you turn your back on Jesus.’ That stayed with me.”It was an Alpha course that helped Tina meet Jesus for herself. A friend of hers had recently become a Christian, and Tina admits she was sceptical at first. “I told her to watch out, saying: ‘They just want your money!’” But I saw her go from being someone who dabbled in drink, drugs; everything really and who generally found life really hard, to being a good mother and finally able to hold down a job.

“When she told me she was going to run the Alpha Course, I said: ‘What on earth is that?”’ She said, ‘It’s the meaning of life, why you’re born and why you die. Do you want to come and do it?’ I was like, ‘No!’ but I couldn’t believe the change in her.“I was always fascinated by birth, even before I became a Christian. I was really small when we got married and the doctors told me I wouldn’t be able to have children. At the time I didn’t care, because I was 19 and the last thing I wanted was children, and Sam wasn’t bothered. But then I had a friend who had a baby and I thought it might be quite nice to have one; immediately I had that thought, I started to feel poorly and then really sick. I was rushed into hospital and told I had appendicitis. They asked if I could be pregnant and I said, ‘No I can’t get pregnant.’ Luckily they did a pregnancy test just in case…I was six weeks pregnant!

“I was so happy!” she exclaims, “And Sam was happy, but I was so ill! Maxwel, our eldest was born when I was 24and by the time I was 30, we had five children: a boy, three girls (Poppy, Araminta and Beri) and a boy (Noah). I think when you give birth it makes you think of something supernatural doesn’t it? With Max I’d wake up every morning in amazement that I had a baby and I just loved him so much.”But back to her first love: Jesus. “So my husband Sam was an atheist; he said there’s no way there’s a God! We’d had difficulties – with him being away for work we didn’t have an easy marriage. So even though I didn’t believe, I think I wanted to prove him wrong! I also wanted to support my friend so I did the whole ten-week course and at the end there was a speaker who said that someone was going to meet Jesus that night. I never thought it would be me. He asked us all to close our eyes and pray – it still seeded crackers to me at the time but everyone else did it so I did too. I said: ‘If you’re there God; show me.’ I must have said it about five times, and all I can say is something so big, so powerful, just lifted me in his arms. I didn’t know what was going on and was sobbing, but I was elated at the same time.”Tina returned full of this elation to a bemused husband and children. “I had this newfound love and appreciation for God’s creation; I saw colour everywhere! The kids wanted to know what happened and came to church with me. Sam wasn’t sure but he was fully supportive and even used to cook for the mix of people I brought into our home when I decided I wanted to run the Alpha Course too!”* I didn’t know what I was doing; I just knew I had to tell them all about Jesus.”

A Muslim woman once asked me to remove the cross…

A passion for fashion

Tina has always loved clothes and fashion and has been collecting an impressive amount since she was a teenager. Her incredible sense of style and fun has given her access to brands like Gucci and Miu Miu, who invite her to their events, once even crossing her path with supermodel Kate Moss’ daughter[and now model] Lila Moss. Tina says: “I met Lila at one of the shows for Miu Miu. She loved my beads so I gave her a set. I also met a photographer called Kofi who posted about me on his YouTube platform. People were asking who I was and that helped my Instagram go crazy!’Tina manages to be both modest and excited about her beads, which sell for up to £100 at London-based Mira Mikati Studios and have a fan base as far away as Brazil. “When I first started, people wondered why I was giving them away when I could be selling them. But that’s not why I do it. So I prayed about it and thought if I can sell a few, then I can give more away! I bless every bead I give away or make. Each one is completely unique, and I put a heart and a cross on each. A Muslim woman once asked me to remove the cross.” Intrigued, I asked Tina what she did. “I removed it! But now she wants to come to church with me! Isn’t that so amazing?”

Tina is very body confident and swims and walks her two dogs between five and ten miles every day. I ask her to speak on a topic we recently covered in Woman Alive(‘The InvisibleWomen’, February issue) and how she feels about ageing. “You know, I never even thought about it. I was just so busy with the kids and nursing my mum. Then I realised, when I went to visit her in the nursing home, that when you’re old, no one gives ash*t. There were all these people that no one goes to see. I’d take them ice creams and we’d play dominoes, and bingo and I’d dress up and dance.” She pauses as she tries to remember my question: “I reached menopause when I was about 52; I’m57 now. I hit menopause and went a bit crazy. Not because of my age or anything, just hormonal. I was crying and didn’t know what to do with my life. But I had always loved clothes soI walked into Dover Street Market, where my daughter worked at the time, went up to the boss, gave him a kiss and said: ‘You need to employ me.’ He gave me the job the following week!I was one of the top saleswomen really quickly but it wasn’t a surprise to me. I thought: ‘If you can sell Jesus, you can sell anything.’ I love my job; I get dressed up every day and that what keeps me young.”Tina’s energy is frantic, creative, catching. In her email tome before this interview, she said, “I vomit Jesus!” and she absolutely does. When I got back from London, my partner said I actually looked different. We are called to be people of influence for Jesus wherever we are and it’s so amazing what happens when we’re around people who emit Jesus so fully in their everyday lives. It’s the way I think we should all aspire to be. Not like Tina, but like Jesus; whatever that looks like for each one of us.