How do I respond as a Christian if my enemy wants to kill me?

Ella Bartelsian of Yerevan International Church, Armenia, spoke to Clare Blake about how God is breaking through to a defeated nation

Ella Bartelsian, like everyone else in Armenia, was living on a knife-edge during the 44 days the country was at war with its Muslim neighbour, Azerbaijan, in 2020. Reports of missile strikes and heavy shelling, fierce army skirmishes, residential areas reduced to rubble and refugees forced from their homes struck fear into Ella’s heart. After all, she and her husband Matt had four children. Should they go or should they stay and faithfully pastor the church God had called them to?

Yerevan, Armenia’s capital city, was far away from the war area, but Ella was deeply moved by the traumatised survivors she helped care for. “I met people who’d just experienced a night of shelling and seeing their psychological state – the shaking, trembling and crying – broke my heart. It was really stressful too because I didn’t know if the same thing might happen to us in a couple of days.”

The six-week 2020 Nagorno-Karabakh conflict was a vicious struggle between Armenia and Azerbaijan over a long-disputed area (called the Republic of Artsakh by Armenians), which Armenia had occupied after the first Nagorno-Karabakh war (1988–1994). This latest war, though shorter, was more savage as 21st-century military weapons like drones, long range missiles and rocket artillery gave virtually no warning, resulting in a heavy loss of both military and civilian life. Three ceasefires brokered by Russia, France and the US failed to stop the fighting and it was only after the capture of Shushi, the second-largest settlement in Nagorno-Karabakh, that hostilities finally ended with Azerbaijan, Armenia and Russia signing a ceasefire agreement. 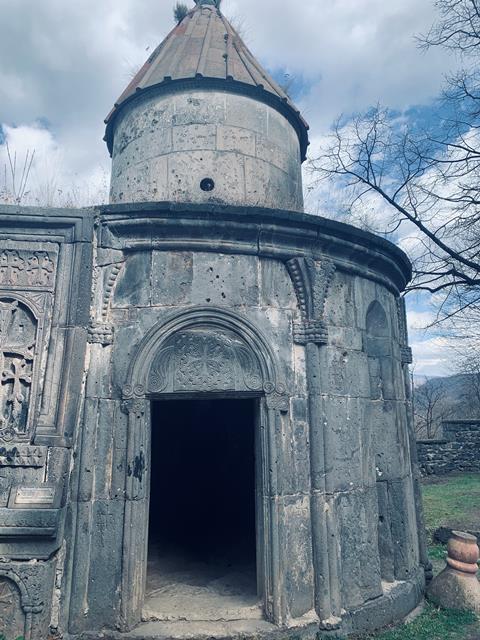 However, even now, months later, there is still a real sense of tension as the situation remains volatile. Ella and her fellow Armenians wonder if this fragile brokering of peace will crumble like previous attempts have.

God in the midst

What was really hard for Armenians to understand was how they’d lost the war in the first place. As the world’s oldest Christian nation, surely God should be on their side? Ella totally understood their confusion. “Every night we prayed and interceded. When we lost, it made us ask: ‘What’s this all about, Jesus? Didn’t you hear our prayers?’”

And yet for many Armenians being a Christian was more of a label than a reality. This was certainly true of Ella when she was younger. When she attended a youth camp sponsored by the Armenian Evangelical Church, Ella ridiculed what she perceived as the naivety of the Christian leaders. “Have you had an education? Don’t you know about Darwin and evolution?” she argued. But on the last day of the camp, God surprised her when the leader asked them to imagine Jesus knocking on the door of their hearts. “What will your response be?” he asked.

Not expecting to feel anything, Ella closed her eyes with the rest and immediately had a vision. She was in a dark room but a door suddenly opened, revealing a bright light that she knew was Jesus. All cynicism vanished. Knowing she wanted Jesus, her response was a resounding ‘Yes’ but a voice in her head whispered: “You’ve spent the whole week arguing with these people. Your answer must be ‘No’.” It was very convincing, but Ella stuck to her decision, knowing that that ‘Yes’ was the truest thing she’d ever said. 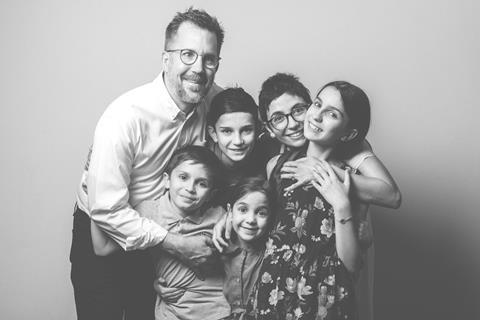 From then on, Ella’s life completely changed. While doing her master’s in Sociology in Warsaw, Poland, she met Matt, an American, who was working there. After she graduated, their relationship became long-distance with Ella in Armenia and Matt in New York. Ella started to pray that God would open doors if he wanted her to marry Matt. The first hurdle was convincing her parents to let her fly to New York to visit a man who wasn’t even an Armenian in order to decide her future, but God gave her the right words to say and they gave her permission. The next obstacle was getting a US visa; amazingly the interviewer granted her one. The third hurdle was that Ella wanted her parents’ blessing. When they eventually met him, Ella’s parents immediately loved Matt, even though their first comment was: “But he’s so non-Armenian!”

Once married, Matt’s job in global advertising took them from New York to Sydney and Singapore. Ella’s job was in social work, but when they moved to Shanghai God called them back to Armenia. Before they returned, they spent nine months working with Jackie Pullinger and her team at the St Stephen’s Society in Hong Kong. This involved working with drug addicts, living in community, praying, worshipping, cleaning the toilets and, most importantly, receiving prayer. It was a time of learning about freedom in the Spirit as they witnessed addicts come off drugs through God’s power and turn to Christ. Ella saw it as a training ground, commenting: “I think if we’d come to Armenia without that, we might not have stayed. It really built up our faith.”

When they arrived back in Armenia, Matt had no job but they felt challenged to live by faith like the St Stephen’s community. Being obedient to God’s will eventually led them to become pastors at Yerevan International Church, a church that would become a beacon during the war and in the defeat that followed.

When Azerbaijan won the war, Ella succumbed to the despair that swept through the country. “It was this shock of: ‘Our government told us we were going to win and we knew our cause was right. It wasn’t us who started it.’ Since losing, I think our whole nation has been suffering from post traumatic stress.”

Ella’s complete collapse after the defeat revealed her deep-rooted sense of pride in being an Armenian, which was something God challenged her to change. “I had to repent and say to God: ‘I’m sorry for thinking that as Armenians we are better than Azeris and Turks.’”

However, losing the war raised an even deeper issue for Ella, as she had to face the question: “How do I respond as a Christian if my enemy wants to kill me?” This was not just theoretical, as Azerbaijan had been helped to victory by Turkey, and Ottoman Turks had killed more than a million Armenians during the First World War in a horrific genocide. Now Armenia fears that history will repeat itself, especially following Turkish President Erdoğan’s threat that the Turks will “finish what their ancestors started”.

Jesus calls us to love our enemies, but is it possible to forgive such a terrible atrocity? Ella responds to this question thoughtfully: “It’s not easy, but we do pray a lot for our Muslim neighbours like Azerbaijan and Turkey. We just say: ‘God, we bless them. We bless them to know who you are, we bless them to come to a place where they know your love and also, we realise that they can’t do that unless we, their neighbours, go to them and love them.’”

Being the Church in a crisis

The church that Ella and Matt pastor is seeking to be salt and light in this time of great stress. Church members have taken food to refugees but, more importantly, stayed to chat over coffee, recognising that doing simple, normal things can help to take away some of the horror. Ella is particularly moved by the plight of soldiers who have ended up in mental institutions. “Culturally, Armenia is very patriarchal and a man has to be seen as macho, so these soldiers feel great shame. They’ll say: ‘Oh, I’m just a crazy person,’ but I tell them: ‘No, you’re not crazy. It’s not because you were weak. Any person that goes to war will experience this.’” 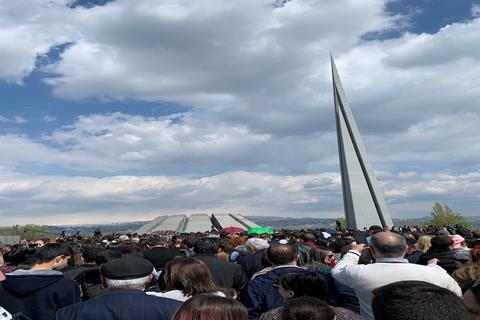 Thousands of people at the Genocid Memorial on 24 April, 2019 ©Ella Bartelsian

As trust has grown, so have opportunities to pray, and a number of those broken have become Christians. It excites Ella that through loss and sorrow God is working, but she believes they are on the cusp of greater things. “Ultimately, my prayer is that God will use these tragedies to awaken my country and my people to the need to cry out to God corporately. I don’t believe it’s an accident that we’re surrounded by Muslim neighbours. There is a calling on us as a Christian nation to show God’s love to them.”

If you would like to pray for all of those affected by the war, here are some suggestions from Ella:

• Pray for healing for all who experienced loss.

• Pray Armenians will not just be nominal Christians, but encounter Jesus for themselves.

• Pray that Armenia will be a light to its Muslim neighbours.