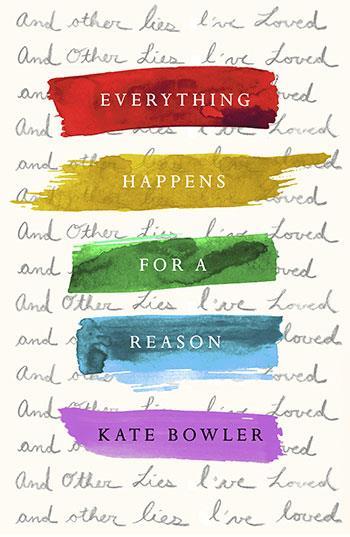 She was young, smart, with everything going well – married to her childhood sweetheart, enjoying life with their newborn child, flourishing at her work in academia – when she received the diagnosis, writes Amy Boucher Pye.

And not just any cancer, but terminal in the form of stage IV colon cancer. According to her, the second-least sexiest cancer (with rectal cancer getting the top prize).

Kate Bowler’s world went into a spin when she received this shattering news. As an academic, she studied the American prosperity-gospel movement, often known pejoratively as the “heath and wealth” gospel. She started to realise how many of these beliefs she had adopted unthinkingly, believing that God would always bless her with good things (not difficult things). And that if she tried hard enough, naming her prayers with enough faith, God would answer her pleas in the way she sought.

The cancer diagnosis woke her up to these unexamined beliefs, making her delve into what she held onto as truth. And this is the primary focus of her book – what platitudes do we believe, and why?

As she answers this question, her academic grounding gives the book depth, for she thinks deeply.

But this way of seeing the world can make readers feel distanced from her – readers who believe they will come to know her intimately while reading her memoir about her life and impending death. In a few places she pushes back the veil and lets us know what she’s feeling and thinking, and those are powerful moments. But I was sorry for the distance, and thought she too often made unnecessary connections with the subject she’s studied academically, the prosperity gospel.

Having said that, I felt overcome with emotion a couple of times while reading her accounts of getting her diagnosis and preparing for her surgery. These moments, however, were fewer in coming than I had anticipated.

I liked how she wove in the seasons of the Church year into her book, for it made the passing of her limited time seem ever more powerful. Yet in terms of her faith, I didn’t feel I ever learned what she really believed.

The appendices she includes at the end of the book are helpful, such as what not to say to someone with a chronic or terminal illness.

With those provisos, it’s a book well worth reading, for it will make us consider our own death. After all, as she says, we’re all terminal, but she knows it: “All these words I am tripping over are benedictions. Live unburdened. Live free. Live without forevers that don’t always come. These are my best hopes for you, that you press forward at last. Fare thee well, my loves” (page 60).