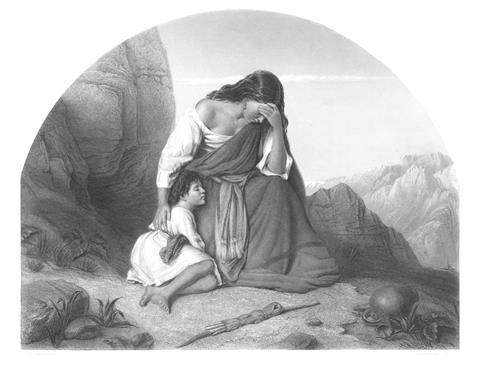 One of my students did a research project on the lives of marginalised women in Addis Ababa. She found that few of the group she engaged with had any knowledge of the Bible or much contact with Christianity. So, she asked the group leader to read some Bible stories about women with them. When they got together afterwards she asked if they could identify with any of the women they had read about. Almost unanimously, the answer was yes, they could identify with Hagar.

Hagar is in fact one of the key women in all the Abrahamic religions and, even today, she is revered as the ancient matriarch of multiple Arab tribes. Yet that was not why these oppressed women identified with her. It was because her story is also one of the saddest and most disturbing in the Hebrew scriptures.

Hagar is first mentioned in the Genesis text in relation to the infertility of Sarah, wife of Abraham. Despite God’s promises that Abraham and his wife Sarah would become a great nation, Sarah remained childless. Hagar was Sarah’s Egyptian slave, so she must have seen the distress this brought Sarah and probably felt sorry for her. Yet slaves existed simply to do the owner’s bidding and Sarah did not go to Hagar for sympathy. She had another purpose for Hagar.

Sarah had decided to take matters into her own hands. She would use the womb of her slave. Hagar wasn’t asked what she thought of the project, or whether she minded having sex with Sarah’s husband. Her opinion was irrelevant. She was there to do the other woman’s bidding. Hagar’s womb belonged to Sarah to use as she saw fit. So Hagar was sent to have sex with Abraham. It might not have been easy for Sarah to direct a younger, attractive woman into her husband’s bed, but it is clear that she did not then see Hagar as any kind of competitor. This was a practice often used by women like Sarah. Before long, Hagar became pregnant. The plan had worked.

Or had it? Another issue emerged immediately. Sarah had not considered that conception might change Hagar’s status, but Hagar had succeeded where Sarah had failed, so a new level of tension entered the relationship. Sarah began to resent the slave and what she saw as her scornful attitude. Complaints to Abraham were heard with complete indifference: he told Sarah to handle it her way. She did. She mete out cruelty and oppression to the woman who had simply acted under her instructions. The injustice already suffered by Hagar was compounded by the brutality of her mistress. Fearing for her safety, it seemed the only option to the pregnant slave was to run away into the desert.

The sense of abandonment and rejection that Hagar experienced must have been acute. She had been treated as a commodity, not a person; she had been forced into an intimate relationship yet allowed no emotions or even identity of her own. Still reeling from the blows to her body, she was probably completely unprepared for what happened next. She heard the voice of an angel calling to her (Genesis 16:7). God had seen her distress and wanted to encourage and bless her.

For Hagar, this experience by the water spring was life-changing. The angel told her that she would be the mother of descendants too numerous to count and prophesied over the baby in her womb. She was told to return to Sarah. Hagar slowly absorbed what was happening to her. Removed from the orbit of those who controlled her, she had found something much deeper than even human compassion – a relationship with God. She testified out loud: “I have now seen the One who sees me” (Genesis 16:13). Her identity was no longer that of an Egyptian slave, but of a woman who had experienced God’s presence. She was known for who she really was and was of significance in God’s covenant with his people. It was a new Hagar who went back and resumed her service.

The relationship with Sarah did not improve, however, not even when Sarah had her own son. We might have thought that Sarah’s antipathy towards Hagar might have changed after the miracle of late childbirth had established her significance as a mother. But, given that Ishmael was Abraham’s older son, Sarah’s insecurity remained. Her husband could still prefer him. She demanded that Abraham banish both slave and son. This time her complaints touched Abraham more deeply. He cared about Ishmael. In his distress, he would probably have refused Sarah, had God not spoken and reinforced the need for Hagar and Ishmael to be sent away (see Genesis 21:12-13). So, clutching the precious provisions of water from Abraham, Hagar once again became a fugitive in the desert. Now all her anxiety was focused on her boy. Abraham’s water ration was soon used up, and she felt powerless in the face of Ishmael’s need. She sobbed in anguish at the inevitability of his death in the desert.

But, yet again, Hagar found that God had seen her, and was caring for her. She found she was safer with God in the desert than with Sarah in Abraham’s household. And when God showed her the well of water that would keep Ishmael alive, it was symbolic of all the provisions God would make in their lives. Hagar and Ishmael would live in the Desert of Paran with God watching over Ishmael as he grew to become a skilled archer. They would not live in opulence, but under divine protection, and Hagar would no longer be a slave but walk free. When it was time, she would return briefly to Egypt to find a wife for her son. And the sober prophecies spoken over him by the angel would come true. He would indeed father many people, yet would be known as a man of conflict and hostility with everyone’s hand against him.

Hagar’s story is vital for understanding more about God, ourselves and the world we live in. When we look at the friction and tension that have so often marked the history of the Middle East, we can begin to learn the significance of prophecy. Ishmael was indeed the father of many tribal groups but, as the angel foresaw, conflict and hostility have been endemic in political relationships across that region.

We learn too about the importance of monogamy as God’s plan for marriage. The polygamy in the relationships between Abraham, Sarah and Hagar not only distorted the one-flesh intimacy of marriage, but also increased the power of the man and the potential for jealousy and strife between competing wives. A third thing we learn is the strength of God’s heart for justice and his concern for those who are violated or exploited. The messages from this story are echoed in the warnings of the Prophets and of Jesus in the New Testament. The evils and ugliness of slavery are exposed as well as its intersection with racism; the low value given to the girl from Egypt and her otherness making her vulnerable. The wrongness of all forms of owning or controlling the lives of other people is writ large. In Hagar herself, we see reflections of so many other women subject to sexual exploitation, who, like her, have no voice and no alternative but to comply. Her story reminds us again why trafficking and sex slavery are utterly wrong and must be combatted and eradicated.

There are personal lessons wrapped up in this story for us too. We find that freedom is not always where we think it is. Hagar was a slave and Sarah was free, yet Sarah’s attempts to control others show she was in bondage to her wants and fears. When our wants take such priority in our lives, we too are no longer free.

We find also in the story that feelings aren’t always the final arbiter. Hagar felt abandoned, powerless and isolated, but God found her, and gave purpose to her life. We too can have feelings that overwhelm us and make us oblivious of God’s presence, yet God sees and knows the reality of our lives. In our darkest moments we are not alone; we can reach out to God and find in the bleakness his blessings and comfort. Whatever our fear and despair, when we encounter God’s deep, abiding love, we too can find that, eventually, we’re able to walk down a new road to freedom.