The return of the burqa

Clare Blake urges us to pray for the women of Afghanistan, whose freedom is about to be eroded and whose very lives may be at stake

The speed of the Taliban’s capture of Kabul has left Afghanistan reeling. What happened to the training of the armed forces and police, the millions invested in rebuilding a nation, and all the safeguards and strategies that were supposed to make sure the Taliban’s reign of terror would never be repeated? Hope has turned to ash and fear stalks many hearts, but especially those of the women who are seeing everything they have fought so hard for over the last 20 years snatched away. 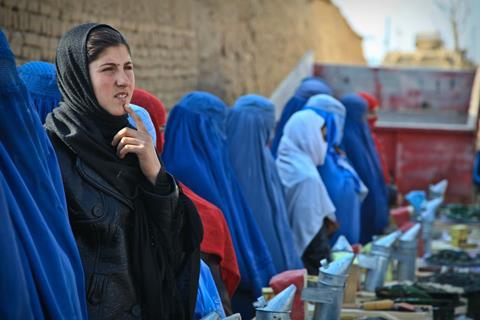 During the two decades since US-led forces defeated the Taliban in 2001, a bright new day had dawned for Afghan women. Many had asserted their independence and relished the opportunities education had given them, with some becoming lawyers, activists, engineers, politicians and journalists.

They had escaped a harsh regime in which women were regarded as little more than breeding animals, forbidden to work or have a proper education and subject to harsh laws, which stipulated that any woman foolhardy enough out to go out without a male ‘guardian’ faced a severe beating for immoral behaviour.

So it was with real anguish that many heard the Taliban announcement that women must once again wear the burqa. To modern-day Afghan women who love to wear bright clothes and get their nails done, the burqa is a symbol of repression. Its shapeless folds once hid women from the world and the world from women, crushing every hint of femininity and identity. Wearing it once again, they will become invisible, second-class citizens; downtrodden and oppressed.

At the moment, the women of Afghanistan are able to speak of their ruined hopes – of the way they feel betrayed and are in fear for their lives – but how long will it be before they are silenced?

I wept as I listened to an interview on Channel 4 between Krishnan Guru-Murthy and Pashtana Durrani, who runs a charity called LEARN Afghanistan, which educates girls from rural communities. Fearful for her students and what might become of them, she said: “All the sacrifices we made were for nothing.” As an educated woman who believes in female equality, she is also facing the harsh reality that she may become a target: “I might be murdered tomorrow.”

Suddenly out of a job, Afghanistan’s Minister of Education, Rangina Hamidi, appeared on the BBC News, shocked and feeling betrayed by the country’s leaders. Rangina is awaiting a knock at the door that may signal the end of her life, for how dare a woman step up to take a role in government? “I might face consequences. I guess that’s the price we pay for trying to make the world a better place.”

As Christian women, we should share this sense of shock. After all, aren’t we living in the 21st century, which is supposedly civilised in its treatment of women? Unfortunately, this is not the case in Afghanistan; the worst place in the world to be a woman, according to the UN.

The situation looks bleak. At the end of the interview, Krishnan asks Pashtana what she will do now. Her answer is incredibly moving: “Pray. That’s probably the last thing I’ll do, but it’s the only thing I can do.”

I, for one, will be praying, too. Let’s speak up for the women of Afghanistan and for Christians in the country’s underground churches.