As the UK wakes up to the bizarre reports of Will Smith’s violent outburst at the Oscars, writer Lauren Windle tries to make sense of the events and asks why he had to bring God into it?

Will Smith has been in the press a lot lately, from the revelations about his sex life in his recent memoir to the unwanted publicity of his “non-monogamous” relationship with wife Jada Pinkett-Smith. The media furore has been so intense that in December last year a Change.org petition asking journalists to “stop interviewing Will and Jada Smith” accumulated more than 11,000 signatures. 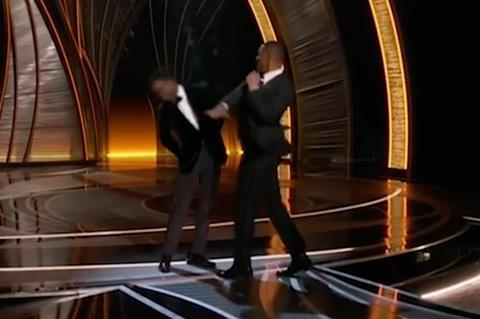 Well sadly for those 11,000 people, there’s going to be a lot more Will Smith in the press as he just slapped Chris Rock around the face on stage at the Oscars. In order to bring you the most accurate break down, I’ve watched a lot of footage of the incident and read as many of the early reports as possible.

This is how it went down: Chris Rock made a joke about Jada Pinkett-Smith starring in a second GI Jane movie, a reference to her recent decision to shave her head. As a quick aside; Jada has spoken out in the past about her battle with losing her hair and the anguish it caused, so it’s likely her decision to shave her head was not a style choice or for an acting role, but rather out of painful necessity. Next we see Will march on stage and head directly for Chris, he walked straight up to him and slapped him round the face.

Initially the crowd laughed, as it seemed too comical not to be a skit arranged by the producers.

Initially the crowd laughed, as it seemed too comical not to be a skit arranged by the producers. But Chris Rock’s stunned response made it all too clear he had no idea it was coming. He said: “Oh Wow. Wow. Will Smith just smacked the s*** out of me.” Will sat back down in his place and shouted up at the stage: “Keep my wife’s name out your f***ing mouth.”

Chris Rock’s bewildered response was: “Wow, dude. It was a GI Jane joke.” But Will just repeated his aggressive instruction. Chris confirmed that he wouldn’t speak about Jada again and rounded off the bizarre moment by saying: “That was the greatest night in the history of television.” The LA police department have confirmed they’re aware of the incident but said that Chris had decided not to press charges.

Minutes later Will Smith won an award for his role as the father of tennis greats Venus and Serena Williams in King Richard. He was in tears as he collected the Oscar where he described the character Richard as a “fierce defender of family” and explained that as an actor people are rude about you constantly and you’re expected to just take it.

Don’t commit a public act of violence and then talk about how God is doing incredible things in your life. Don’t drag God down with you.

Then he brought God into it. In his speech he said he was: “Overwhelmed by what God is calling on me to do and be in this world.” I agree that the platform Will has is extraordinary and love that he has a faith. But I don’t have a Christian bumper sticker on my car because I don’t believe my driving is good enough to be associated with the divine, and I feel the same applies here. Don’t commit a public act of violence and then talk about how God is doing incredible things in your life. Don’t drag God down with you.

Fellow nominee Denzel Washington told him after the incident: “At your highest moment, be careful — that’s when the Devil comes for you.” This is a statement I very much agree with. If Will Smith truly has a faith in Jesus and is guided by a personal relationship with him, then my prayer is he will make a public apology and full amends to Chris Rock.