Christian money coach and author Claire Sweet, explains that there’s nothing inherently wrong with Christians being successful in business, having savings or earning good money – it’s the love of money that is the problem.

I’m sure you know that there are lots of things that affect how we chose to spend our money, and how we feel about money in general. Loads of this stuff is what we’ve been told by people we trust, adverts we’ve seen and research we’ve done. But, a whole load of it is the narrative we’ve often unknowingly absorbed as a child. And Christians can have even more baggage. 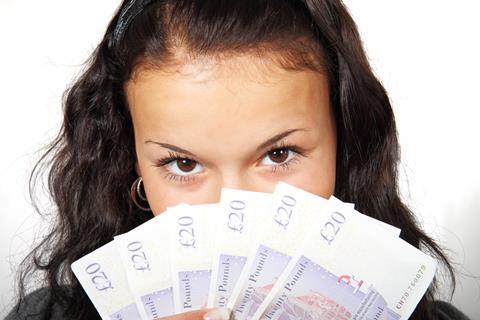 We shouldn’t look to blame all of our money habits (good and bad) on our parents or church community. We’re grown ups and the buck stops here. But, taking some time to consider the story you tell yourself about money, wealth, and spending can really help you to feel better about money.

We know that we absorb a phenomenal amount of data between birth and eight years old, which is a great thing otherwise we’d never successfully learn to do things like; walking, reading, swimming and all the other things that we take for granted as an adult. But, we can also learn habits and beliefs that don’t serve us. These need to be unlearned, like those beliefs that Christians are meant to have about money.

Taking time to consider the story you tell yourself about money, wealth, and spending can really help you to feel better about money.

I remember having a chat with a devout chap from our church who was really close to retirement, never married and due to ill-health, had been living on benefits in the gap between ending work and being able to draw his generous final salary pension. I explained that he had a choice between taking the full pension, guaranteed for life with index linking, or taking a slightly smaller annual pension but with a tax-free lump sum of about £50,000. He said: “I can’t have that sort of money in my bank as a Christian.”

“What? You’ll need to run that one by me…” He went on to explain that with so many people in the world going without, he couldn’t justify having that amount of money. “It would be greedy,” he said.

I explained that as a single person, his pension would die with him and even at the lower level of income it would be far more than he would need for his 60y+ frugal lifestyle. And by taking the lump sum, he could donate it to a charity, the church or otherwise use it to benefit others – whereas if he left it in the scheme the money would die with him, and I could say with certainty they wouldn’t be using it in such a benevolent manner.

There’s nothing inherently wrong with Christians being successful in business, having savings or earning good money – it’s the LOVE of money that is the problem.

There’s nothing inherently wrong with Christians being successful in business, having savings or earning good money – it’s the LOVE of money that is the problem. Putting it above your love for God and letting it become your focus (Matt 6:24).

There are many Bible verses that explain we should be good stewards of your money and that the Lord wants us to be prosperous and generous. (Deut 8:18, 1 Sam 18:14, Matt 25:14-30, 1 Tim 6:17-19, Prov 22:9, Prov 22:5 and many others). But, like many things it can be hard to separate what we think the Bible says, to what it actually says – and further to that what the writers were actually trying to say to us, based on their knowledge of the world around them at the time.

It’s time to feel confident that not only is your financial success blessed by God, it enables you to pour his blessings out on the world around you.