Justin Bieber had to pause his tour due to facial paralysis struggles, but says Jesus has given him peace

The popular singer has been open about his Christian faith in the past and famously attended Hillsong church in LA. Now, the Love Yourself singer, has opened up to fans about how Jesus has helped him deal with recent medical problems. 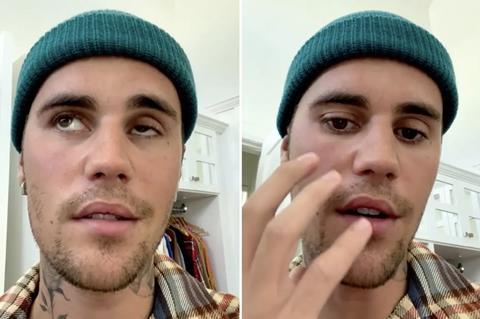 Justin Bieber has always spoken openly about his conversion to Christianity. The Sorry singer was baptised in 2014 but it wasn’t until 2017 when he truly started investing in his faith and relationship with Jesus. Mental health struggles had caused him to drop out of his Purpose World Tour early. The global star said that he was visiting an Irish castle when he had the realisation about his life

He said: “There was a sense of still yearning for more.” And continued: “It was like I had all this success and it was still like, I’m still sad, and I’m still in pain. And I still have these unresolved issues. And I thought all the success was going to make everything good”

“It was like I had all this success and it was still like, I’m still sad, and I’m still in pain.”

Since then, he hasn’t stopped being vocal about his faith, regularly posting on Instagram about his gratitude to God and Jesus. But now the 28-year-old has once again had to hit pause on a tour, but this time because he is struggling with medical problems.

Taking to Instagram, the singer spoke to his 244 million followers about the challenges he’s faced with facial paralysis and the peace he feels thanks to Jesus Christ. He revealed that he has been diagnosed with Ramsay Hunt syndrome. This illness happens when a shingles outbreak affects the facial nerve near a person’s ears. For Justin this has caused paralysis on the side of the face which has been attacked by the virus. He said: “I know this storm will pass but in the meantime I know Jesus is with me.”

“Through all of the discomfort I have found comfort in the one who designed me and knows me.”

On Monday June 20, the singer posted a video to his social media account speaking more about the diagnosis. He said: “I wanted to share a bit of how I’ve been feelin’. Each day has gotten better and through all of the discomfort I have found comfort in the one who designed me and knows me. I’m reminded he knows all of me. He knows the darkest parts of me that I want no one to know about and he constantly welcomes me into his loving arms. This perspective has given me peace during this horrific storm that I’m facing.”

The Canadian singer said he had been doing facial exercises to aid his recovery. Ramsay Hunt syndrome is an extremely rare condition and in most cases people full recover in a matter of days or weeks although no one can say for certain when Justin will be back to full health.