We need to pray for our nation 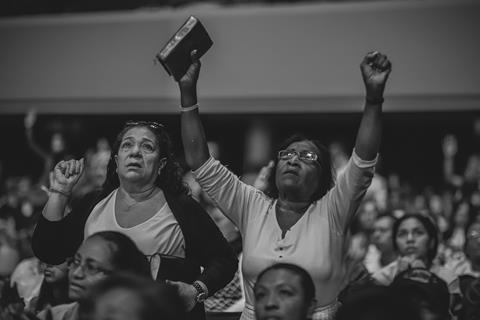 When we were putting together the April issue of Woman Alive, we were sent an advert with the strong headline: “Pray earnestly for our nation”. The advert was promoting a leaflet which showed past examples of answers to prayer during wartime and its intention was to encourage people to pray like that again.

That edition, which had an equally timely (and unplanned) focus on health, was released right into the COVID-19 pandemic currently sweeping the globe with this advert prominently featured on the outside back cover. Even more amazing is that this advert was not posted by a large organisation but by an individual. Pastor John says:

“I was guided to write The Wartime Miracles Leaflet in a dramatic way. I had been working on a sermon I wanted to write for a Remembrance Sunday service. I knew the topic I wanted to speak about and I had books strewn all over my study floor as part of this research. I had been working on it all afternoon but as evening approached I still hadn’t managed to write a sentence. Nothing seemed to come together. I felt I was up against what I can only describe as a sort of “mental brick wall” and I just couldn’t break through. The more research I did the stronger this “blockage” seemed to get. I constantly kept praying for guidance but nothing fitted together. I had never experienced a sensation quite like it.

My dear wife put her head around the door to say that dinner would soon be ready. I was about to put my books away, when like lightening, the instruction flashed across my mind that I was to tackle what I was doing from a totally different angle. It was from an angle I had never thought of before; wartime miracles in answer to National Prayer and Repentance. Instantly this “mental brick wall” burst like a dam.  From that moment, within minutes the information was almost downloaded to me regarding what I was to write from this new angle. I sensed guidance, to put an example here, another sentence there, and so on. It was quite remarkable. I have never experienced anything like it before or since.

After I had put it all together and while I was still sitting at my desk, again like lightening, the instruction then flashed across my mind that I was to circulate what I had compiled nationwide.

When something really is a God ordained work it is right to expect confirmation of this in some specific way. About a week later, I was visiting a lady who was relatively new in her faith.  She revealed to me that she had come into some money and that during her prayer time had sensed that the Lord wanted her to give some of this money to me, “for whatever project I wanted to use it”. She knew nothing about the Wartime Miracles Leaflet nor the command I had been given to distribute it nationwide.  It was with this initial funding that the cost of printing thousands of leaflets and the purchase of thousands of stamps was funded. The Lord had commanded, now He provided. The Lord is faithful.

Copies were posted to over 25,000 churches across the major denominations throughout England, Wales, Scotland and Northern Ireland. Then during the autumn of 2019, full page adverts about the Wartime Miracles Leaflet came out in The Evangelical Times, Evangelicals Now, Heart newspaper, The English Churchman, Heroes of the Faith magazine, Christian Voice, Direction magazine, I Believe magazine and this year, Premier Woman Alive and Premier Christianity."

To obtain a free copy of the Wartime Miracles Leaflet and a Prayer and Intercession guide please email strengthenthefaithful@gmail.com  with “Wartime Miracles” in the subject box or call 0788 404 8379.

There is currently an (unrelated) petition currently circulating which calls for Boris Johnson to dedicate another National Day of Prayer in this current pandemic. You can sign it here.

Photo by Luis Quintero from Pexels