The way I live ought to be normal for all Christians 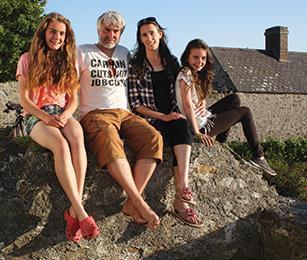 There are solar panels on the roof and vegetables come from the allotment. For many years, there were chickens in the garden and meat from pigs reared with the help of friends. Clothes are hand-me-downs or pickings from charity shops, and evenings are often devoted to tackling issues raised by the community association.

This isn’t life off the grid, in a wild, remote landscape. These are the choices made by a family of four in a terraced house on a council estate in Chichester, West Sussex.

Ruth and Greg Valerio and their two teenage daughters are all committed to living out their strongly held beliefs to care for their environment, their community, their neighbour and their God.

“My overall aim has been to try to live in a way that does as little damage as possible to this earth and its inhabitants, and to do good as well,” says Ruth.

“As a family we have embraced this to different degrees. My husband, Greg, has been very ‘big picture’ focused, pioneering in Fairtrade gold and jewellery, and both my daughters have found their own ways, with one becoming vegetarian and avoiding products containing palm oil.”

For Ruth, as a speaker, writer and campaigner on environmental issues and social justice, she is convinced that giving an honest account of the decisions she has taken and the changes she has made in her personal life have encouraged others.

“I didn’t intend to be quite so autobiographical in the way that I express myself over the years, but I guess it’s naturally how I communicate.”

Indeed, she’s much sought after as an uplifting, engaging and inspiring speaker, and has written Bible study guides and books about a Christian response to the issues of climate change, globalization and consumerism.

Because her books aren’t solely theoretical treatise, readers have been empowered to take action themselves, she says.

“People have told me that because I’m a normal person, and I’ve done it, they feel they might be able to make some of these changes too. It’s a step-by- step approach.

“None of us lives 100% pure lives. If you were to come to my house and stay with me, you would see hypocrisy and failures all over the place. But what’s been important has been the trying, and all the time thinking what can I do next.”

“None of us lives 100% pure lives. If you were to come to my house and stay with me, you would see hypocrisy and failures all over the place. But what’s been important has been the trying, and all the time thinking what can I do next.”

And, after spending the last 10 years with the Christian environmental charity A Rocha, where she was responsible for spearheading the Eco Church programme, the next step for Ruth is as the Global Advocacy and Influencing Director for Tearfund.

“I wasn’t looking to move and I hadn’t seen this post advertised, but through a process of about 24 hours a number of things came together that made me realise actually maybe I need to give this some thought.”

She was appointed at the end of March, after what the organisation describes as “a rigorous recruitment process” and where Ruth refers to her own decision to be considered as “a God thing”.
The role is wide-ranging. But as Tearfund’s focus is not just reacting to need through its poverty relief work, but also analysing and challenging the more systemic issues regarding injustice and poverty, it sits well with Ruth’s own approach to life.

“Tearfund is committed to going where the need is greatest and really responding to the issues of poverty, including looking at the root causes, and that is the focus my work is taking,” she says. “It’s advocacy and campaigning work, pushing governments and political leaders to bring about the structural changes that might help bring people out of poverty.”

Ruth will be overseeing and directing a staff of 50, including the theology team and the global volunteering team. “I see my role as being like a conductor. I want to help everyone be the best that they can be and then they won’t be playing their parts alone, but doing something together, creating something fantastic. I’m excited to be working with such a wonderful, committed group of people.”

Even before Ruth was in post she was instigating change. Recognising that the role would involve travel, not least to reach the offices in Teddington, Ruth has decided to lease an electric car. “The thought of driving up and down in a petrol car was an anathema to me,” she says. “I couldn’t have done it.”

So one of the stipulations of her taking on the appointment was for Tearfund to install electric charging points at the office. “It means that a little bit of the culture there will change,” she says. “And I hope it will encourage other people to do the same.”

Her enthusiasm and commitment are infectious, and she has never been afraid of standing up for what she believes is right. She thinks that a childhood experience shaped her character for this.

“I was bullied quite badly towards the end of junior school,” she says. “My friends turned on me and it really dented my confidence, my self-esteem. I developed a facial twitch, a stammer and I couldn’t sleep at night.”

Once at secondary school, things changed, and it was only recently, when talking with a mentor, that Ruth looked back on those early years and considered how they might have been formative.

“My adult life has been quite a lot of standing out from the crowd and fighting for issues that other people don’t see as so important. I think I might not have developed that slightly rebellious side had I not been bullied. I think God took what was intended for evil and turned it round for good.”

Ruth expressed her individuality as a teenager, but she remained firm in the faith that had been introduced by her parents who were lecturers at a missionary college. In the school holidays, Ruth went to Spring Harvest or visited her sister and husband at a new church in Chichester, called Revelation, where the 24-7 Prayer movement was conceived.

In fact, when she went to Cambridge to study history, she turned instead to a theology course. “I thought it looked interesting, but I had no idea it would take me any further.”

A book called Whose Earth? written by a friend, was the turning point, she says. “It was as if the scales fell from my eyes. I had been brought up with a love for nature, but the Christian connection hadn’t been made. This was the first time I understood what the Bible had to say about caring for the environment, so reading this book planted something really deep inside of me.”

Newly married, Ruth joined husband Greg in seeking to understand issues of justice. Then, working as a research assistant for Clive Calver, director general of the Evangelical Alliance, Ruth concluded that we are all complicit with the arms trade. She realised that she could no longer remain disconnected.

“Suddenly, I joined up the dots between the big issues of injustice and our own personal lifestyle and choices. This wasn’t a theoretical issue any more, about the terrible things that were happening in other places. This was something I was directly involved with – I was supporting the arms race because of how my money was being used by banks and pensions.”

Further academic studies followed, and a commitment to speak and write, and now to campaign and influence in order to engage others in making change happen.

“When we know the damage that we do, and we know that we are called to look after this world and all that God has created, how on earth can we keep living the way that we do? To me the way that I live ought to be normal for all Christians, and it’s not.”

With Ruth smiling warmly as she pleads her case, it is indeed hard to understand why this isn’t so. But listening to her urging, and reading her persuasive words, she surely makes the most convincing case for us all to take just one step closer to getting it right.

What the Bible says

Ruth shares the verses that have challenged her:

This is a real affirmation of the world we live in. In our Christian faith, we are so often taught that this world is simply a backdrop to our lives and is not important – it’s going to be destroyed. But right there in the opening chapter of the Bible, we have this affirmation that the world God has made is very good and hugely valuable.

All our environmental care very simply comes from those two little words “very good”. That is enough.
We must look after the world, not just because of humans, but because it has been made by God and it is good. It is our privilege to serve God by taking care of it. And I want to value what God values.

This chapter has been foundational for me from the start of my adult life. In verse 10, it says we are to spend ourselves on behalf of the hungry and the needs of the oppressed.

This is to be our focus; this is how we are to spend our lives. That doesn’t mean living our life and then perhaps giving away some money. We are to spend ourselves on behalf of the hungry.

These verses are also helping me in taking on the new role in Tearfund. Poverty relief is about going out, helping people and giving them what they need. If you give an oppressed person food, you’ve made them less hungry, but they are still oppressed.

The whole situation has to change if the needs of the oppressed are to be met. I think that ties in with the work of Tearfund, but also in what we as Christians are called to do.

This world was made by Jesus, and for Jesus, and through Jesus. It’s almost as if the world was a present from father to son. Jesus died on the cross and shed his blood to reconcile all things.

Salvation and the Gospel isn’t just about people. That’s important, but actually the biblical view is much wider – it encompasses the whole of creation. And that shouldn’t be contentious – it’s just there, in the Bible.