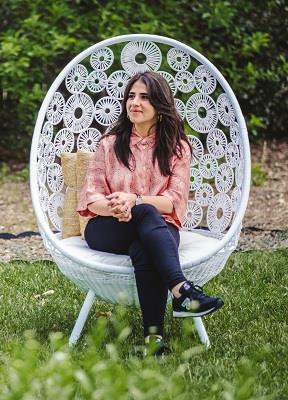 ”I was born in Tehran, the capital city of Iran and for the five years that we were living there it was wartime between Iran and Iraq. I have lovely, wonderful family memories but some of the memories are more wrapped up in wartime; in bombs falling. I remember us having to tape windows to make sure the glass wouldn’t shatter as the bombs were falling in the city.

The most vivid memories that I have of that time, though, are prayer meetings that we would have in our little apartment, as bombs were falling. My dad was amazing; he would drive around the city, find people who needed shelter and bring them into our apartment. As a small child, I remember thinking, firstly, like it was having a ginormous sleepover – obviously mixed in with a sense of fear.

One of the memories that I have is this moment where we were praying; it was night time and I was really frightened. I remember my dad saying, “Jesus is with us, and he’ll protect us.” And in the morning, the bombs had stopped falling and we were ?still there. That was one of the first moments where a sense of ‘God with us’ became really tangible for me. I must have been three or four at the time, but my journey with God began right from then. It was childlike, but it was firm in conviction that God knows me and he loves me enough to care.

The modern-day church in Iran really started in my grandfather’s house. My grandparents became Christians through an American missionary. That kickstarted an incredible encounter that my grandfather had with the person of the Holy Spirit, which started a revival that went on for about three years in their home. They had nightly meetings; hundreds of people got saved; it was this beautiful birthing of a church in a nation.

By the time I came into being my parents were part of the church leadership there. And so I grew up in that atmosphere of seeing God do something that was unthinkable before in terms of starting, impacting and encountering people in the Middle East, in Iran, of all places.

The Islamic Revolution had taken place by the time I was born. So Christians who were in the Church were radical in their belief, because there’s a strict penalty for being a Christian in Iran.

In the late 80s, God started speaking to my parents about all of the Iranian refugees all over the world. They were forming very isolated communities where missionaries weren’t getting in, because they needed Iranian speakers to get to them. God said, “Move to Europe and start planting churches amongst Iranian refugees and start impacting the church in Iran through an underground network”.

My parents loved being in Iran; it was a real struggle when God said to them to leave. But now, the fruit of their ministry is about 300,000 Muslims saved in the last 30 years. It’s just beautiful what God has done. But at that time, of course, they were just taking steps of obedience. Even though they wanted to stay in Iran, they knew that it was a faith journey that God was inviting them into. And so we moved to the UK when I was five.

My uncle was leading a church in London, so we happily joined his church. When I was in my early teens, my parents started thinking for me and my sisters – I’m one of four girls – that it would be really helpful for us to belong to more of an English-speaking church (my uncle led an Iranian-speaking church), so that we could invite our friends from school, so that we could stretch our own evangelistic muscles rather than rely on the wonderful stories from my parents’ ministry and my uncle’s ministries. So we moved to a church that was local to where we were living in Surrey. Most of my formative teen years were spent there.

There’s definitely a difference for us in the relative comfort of the Western church. Persecution forces you to be radical; you don’t join because it’s a nice club or a lovely community, because you’re not willing to die for those things. It forces this sense of radical belief in God, radical love for him and radical commitment, despite anything that might come.

I know there are other forms of persecution that are a reality and I don’t want to belittle those. But being safe can create a level of ease and laxity in how we approach faith – there’s not a huge cost.

When there’s the absence of outside pressure, that would ignite radical faith, we’ve got to be the ones who are happy to stir radical faith internally. And I certainly found that in the local church where we grew up. So, I think you can be just as radical in relative safety. As long as you understand that you’re the one who can stir up commitment and radical faith from within. You don’t need persecution, thankfully.

Right from childhood, I felt a sense of call to vocational ministry. I felt God speaking to me about helping lead churches, helping plant churches, and also preaching and teaching from the Word. But when I came to deciding whether to go to university, what track to take into ministry, I felt God cautioning me that jumping straight into vocational ministry or church work somewhere wasn’t the route he wanted me to take. I felt a draw towards studying something that would earn me credibility on a secular stage, that would stretch me in terms of character, in terms of study, that would look very different to what was my comfort zone at the time, coming from a ministry family. And so medicine seemed like a good fit.

It was about two years in after doing full- time medicine, when God started speaking to me about positioning myself in church planting. So I went down to part-time medicine and helped in a wonderful church plant in East London. And then about four years into that God started saying, “Okay, time to give up on medicine entirely. Now, it’s time to throw yourself into what I made you for.”

It’s a little bit of an unusual journey and stepping stone into ministry, but I’m so grateful for it. Even now, when talking to non-Christians about God, I can see there is a kind of reservation, they don’t really take me that seriously. Until I say: “Oh, actually, I am a medical doctor.” And suddenly people’s hearts are open in a way that they weren’t before. So I can really see the wisdom of God.

Growing up, I had no sense that men and women were being treated any differently. I’m not sure what the church in Surrey’s theological convictions exactly were but I know from my experience, everything felt open. I felt very loved, honoured and seen as someone who they wanted to invest in, which I was so grateful for. And while church planting, I was able to do leadership training and got opportunities to help lead and speak at different seminars and media.

The first time I realised that there were some Christians who didn’t see men and women in exactly the same way was probably when I was in my late teens or early 20s. I had a conversation in which I was told that my belief that I’m free as a woman to do anything, is actually disobedience. And my belief that God has gifted me to stand on platforms to preach to both men and women is actually against what the Bible teaches.

I just couldn’t believe it, to be honest. I’d had so many encounters with God where he’d spoken so specifically about what he’d made me for, that all involved leading, preaching and pastoring. And so I was thinking, “This doesn’t make sense, because the God I’ve encountered is different to what you’re making him sound like now”.

I was told that the teaching gift in me might have been given to me to teach me a lesson, to see if I could submit and relinquish that gift and see it as a test from God. Again, to be honest, I couldn’t get my head around that kind of description of the heart of God. That he gives his children good things, in order to see if they’re submitted enough to relinquish them.

It was probably when I was in my mid-20s, when I decided I had to settle this issue. And so I said to God: “I don’t want to live in rebellion. If you’re telling me that I’m not to do what I thought I was made for, then I want to follow that.” I think it was due to my radical upbringing that I had this kind of will: “If you’re asking me to do it, I’ll do it. But I need to be clear that you’re asking me to do it.”

It wasn’t enough just to hear from different people, and kind of cobble together a theology on this. It was far too important for my destiny, and also for the destiny of those who I would lead subsequently to that. So I spent a good few years studying. In that time there were high and low moments. I remember one low moment where I was journaling, and remember writing down: “God, why do you hate women? Why did you let Paul hate women?” It was an emotional response from a conversation, but it felt very real to me in that moment, the pain of – what does it look like for me? Because I love God, and I believe he’s real. And there’s no way I’m backing away from him. But what does it look like for him to maybe be meaner than I thought him to be?

I came to a point of saying, “Okay, I’m just going to relinquish all control here, let this study go where it goes.” I was aware for my own emotional sanity that I needed to come to a place where there was a full stop on that debate. Thankfully, God was kind enough to lead me to some incredibly helpful resources and to speak to me as I was reading the Bible, opening my eyes to some of the things that are in Scripture, but sometimes are not easily found. And so I came to a point of settling the debate for me. And then I thought that was it.

We will read next month about how God had other ideas!