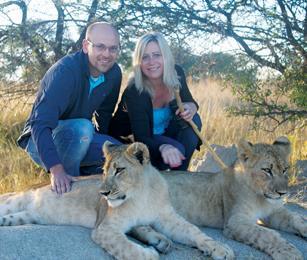 Last year, Nathan and Lou Fellingham spent six months in South Africa working with PJ Smyth at GodFirst church. They talk to Claire Musters about the challenge of relocating their family to a new country, what they learned and what’s next for them

Making the decision to go

Nathan: PJ’s request coincided with a desire that Lou and I had to get a bit of time out of the normal cycle of gigs, recording and so on, to get some space to reflect and hopefully get new song ideas and a clear sense of how we should continue to outwork our lives. We spent quite a few weeks thinking and praying it through before concluding that it was the right thing for us.

I think the biggest concern was the need to take our kids out of school to make it happen. Our oldest son Jesse had been there for over four years and our daughter Ella was into her second year. So it was a big thing to take them out of that security. But, as we weighed it up, we felt that we couldn’t let a fear for our children stop us going for this opportunity.

We’ve known PJ and Ash [his wife] for a long time – not well, but have always observed them, their leadership and family, and thought that it would be wonderful to spend more time with them. So, all things considered, it seemed like God was orchestrating something really cool for us!

Lou: The first hurdle was the goodbyes. We’ve travelled quite a lot as a family, but never for this long. The reality first kicked in when we had to say goodbye at the airport. We’d already said goodbye with tears to some friends and family, but there’s nothing quite like going through the gates at the airport for the situation to really sink in!

Jesse mentioned how hard it was to be leaving everything we know and love, to go somewhere we don’t know and don’t have our friends. We tried to remind him of what it is to follow Christ, to be willing to go where he leads, knowing that he always knows what’s best for us and trusting that he had so much in store for us. The lump in the throat was still pretty real though.

On the night we arrived, Ella had a major meltdown. It was 1am, the house was dark and there was a tall gate with an electric fence running around it. There were instructions on how to set the alarm and what doors we had to lock etc, but we accidentally locked Ella on the wrong side of the door – still inside, I hasten to add, but she understandably freaked out! Once again, we had to speak peace, God’s protection and God’s love over her and us. We all felt a little uncertain in the new surroundings, but the following day everything looked different and we felt comfortable pretty quickly.

Nathan: I think the biggest challenge was settling into a whole other life. It wasn’t just one of us involved in the ‘work’ side, while the other concentrated all their time on the kids – we were both in the whole thing together. So just juggling schedules and making enough time for all of the different needs was tough!

Lou: For me the juggle of family life, work and homeschooling was definitely a challenge. As part of our week, we would have at least two mornings away from the kids and initially Jude (our two-year-old) would often cry when we left – leaving me in tears too. But he soon adjusted and we saw a massive turn around in his confidence.

Homeschooling was probably the hardest part. It’s never been on my ‘dream list’, but it was the only way to facilitate going out there, so we just had to suck it up and crack on. Man, it pressed my buttons ... all of them ... some that I never even knew existed! For the first little stretch I would break down pretty much every week with that feeling of failure. It was tough. Also just having all three of them with me from the moment I awoke, till the moment they went to bed (which wasn’t early), was tricky. There were a couple of weeks where I pretty much resented being a parent! I felt terrible for feeling that way, but I had to repent, process and work it through with God. You’ll be pleased to hear that it didn’t last long and I did come through it!

The things we loved and learned

Nathan: Spending time with the GodFirst team was amazing for Lou and me. PJ has a wonderful gift of encouragement, so just sitting under that and seeing how he is always looking to bring the best out of people was very inspirational. GodFirst is an incredibly diverse and exciting multi-site church.

A real highlight came, just before we returned to the UK. GodFirst tries to meet three times a year as a whole church – they call it Together Sunday. We met on their site at Tembisa, a township on the edge of Johannesburg. Lou and I were both involved in the music and got to be part of an amazing cross-cultural band  with a remit to have a good mix of songs. PJ spoke on apology and forgiveness and it was a truly moving and powerful experience.

We also enjoyed being able to build into the local worship team week by week – not just in and out for a day, but really walking alongside, trying to teach some principles and then observing how things were progressing and changing. We built some wonderful friendships. And I have to say that waking up practically every day with the sun shining was also a hugely enjoyable experience!

For the kids, the whole experience of being in a different culture was an amazing educational experience and the friends they made will, we trust, be lifelong. The flexibility of homeschooling gave them the opportunity to try other activities. Ella joined a ballet class and Jude did a music class. Both Jesse and Ella took piano and swimming lessons, and Jesse joined a school football team.

Lou: I think they have definitely had to learn how to adapt and adjust. There were some things in the week that were set, but most weeks looked different. Along with holidays and visiting the different sites of the church, I think they slept in 11 different places over the six months and, even when we returned, we stayed with some friends in Brighton for three weeks before we could get into our house.

It also put a sense of adventure into their hearts, teaching them that we are part of a global family and that we take care of each other. We received so much while we were out there. God’s provision was incredible and alongside that we tried to give as much as we could. Teaching them the joy of giving and receiving was fun. Teaching them to have individual responses to God as we journey through decision was also a privilege.

When we were deciding whether to extend our time out there, it was extremely tough on Jesse because he desperately wanted to come home. Trying to teach him that, although ultimately it was a decision mummy and daddy had to make, actually God had grace for him in it too, was wonderful. We encouraged him to pray and ask God for his Holy Spirit and grace to help him with whatever the decision was.

I was stretched personally in leading, in stepping out in new songs and also even speaking at their women’s conference. I’ve done talks before, but never been a keynote speaker.

I think one of the key things for me was just a fresh revelation of God’s love for me. He actually, truly, really loves me! This came through in many ways, but I think mainly in his provision. He showed his care in the intricate details: money, time, care for the kids, holidays ... I realised he cared about every detail. I have a deeper understanding now of trusting God because I have a deeper understanding of his love for me and how amazing he is. The joy that comes as you rest in this is amazing.

There were also times when it was tough, when there was no one else to turn to apart from God. I didn’t have any of the usual channels of support available, so I had to turn, lean on, press into and draw from God. That was also a great privilege. When God allows you to be in that position and you actually discipline yourself and turn to him, he does incredible things. My love for him has definitely grown.

Looking back  and forward

Nathan: Lou and I kept joking before we left about this big list of things that we were going to achieve through our time away. We were going to nail our prayer life, become incredibly fit, write songs all over the place, have a clear sense of what the next 10 years should look like for us and be awesome, fun parents – as well as anything that the GodFirst guys wanted us to do while we were there!

Of course, we knew the reality would be different … We didn’t have the time to write songs and to pray into the future, but we wanted to throw ourselves into serving that worship team and that church with everything that we had. And we do trust that we’ve been able to leave a deposit and genuinely feel excited to hear how progress continues to be made with the guys and girls on the team who we grew to love very much. We also trust that God will use the experiences to shape and guide us into the future.

Lou: Since having kids, I’ve always regarded myself as a full-time mother who moonlights as a singer. And I think that will continue. It would appear too that my sanctification process is still happening because I am still homeschooling! Jesse got back into school, but Ella didn’t – oh the joy! Actually, there is joy. Knowing that God loves me, loves Ella and the rest of the family gives me great joy in this, even though it’s tough. There are still tears of frustration shed, but the foundation is still joy ... who’d have thought it!

Look out for a new Lou Fellingham album later this year ...