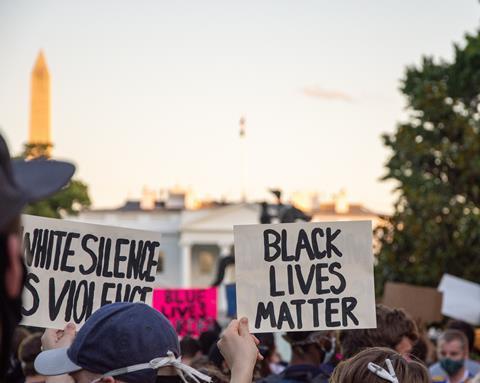 The death of George Floyd by the Minneapolis police officer on 25 May felt very close to home. I grew up in the suburbs of the Twin Cities of Minnesota in an idyllic childhood – loving parents, two siblings to squabble with and love, plenty of friends, a strong, well-funded public school to attend where I made the honor roll.*

So to see the photos of the police officer murdering George Floyd in my hometown felt even more heartrending than hearing about the horrific killing of Ahmaud Arbery reported only a few weeks before or the unsettling racially motivated incident in New York City’s Central Park just days before. This was my Minnesota, which was supposed to be “Minnesota nice.” Racism, I still unconsciously believed, was something that happened elsewhere in America, not in my bubble of whiteness.

The death of George Floyd burst that bubble. I watched Minneapolis burn, the protests turning violent. In the days afterward, following the news obsessively, I comforted myself with the thought that racial tensions are not as divisive here in the UK, and I posted on social media an article published by the BBC along these lines. But that longheld belief has needed to come toppling down, like statues commending slaveholders.

I realise now that racism is a problem wherever I go. In sharing the BBC article, I was, in effect, sweeping under the carpet the pain over Stephen Lawrence’s murder and the police’s handling of it. I was disregarding the findings that people of a BAME background are dying at a higher rate than white people from coronavirus. I was revealing my white privilege.

I would never have called myself a racist, but now I realise that I wasn’t anti-racist. That is, I wasn’t using my voice to speak against the evils of an institutionalised bias against people of certain races. We have to seek to dismantle institutional racism step by step – beginning in the hearts and minds of individuals. And so I am seeking to educate myself on race issues in both the countries I love and am citizens of.

If you, like me, need to learn, you can benefit from the many available resources. Here are just a few recommendations (see also the discussion in our Woman Alive Facebook book club of what people are reading about race):

May we be people who celebrate deep differences without discrimination. May we lament over the evils of racism. May we seek to make our society a place where all people can thrive. May we be open to learning that we too hold ideas that can hurt others. And may God forgive us and help us.

* UK translations – the Twin Cities are Minneapolis and St. Paul, for they grew up next to each other and now form one metropolis; my schools weren’t a “public school” like in the UK, but government-funded ones attended by local children; the honor roll is for the top 10 percent of high performing students.

Photo by Koshu Kunii on Unsplash

Amy Boucher PyeAmy Boucher Pye is a writer, speaker, and spiritual director. She writes devotional thoughts for several publications including Our Daily Bread and New Daylight. She is the author of several books, including 7 Ways to Pray (NavPress/Form) and Celebrating Christmas (BRF). She blogs at www.amyboucherpye.com.
Follow @https://www.twitter.com/AmyBoucherPye