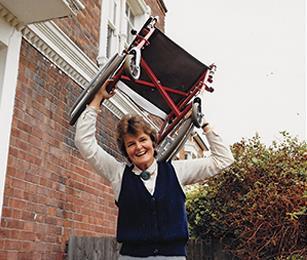 It’s 25 years since Jennifer Rees Larcombe was miraculously healed after being confined to a wheelchair, but she believes the real healing took place some six years earlier ...

I was in a ladies’ loo when I heard two people talking about me outside my cubicle. We were all attending a conference where I was one of the speakers. The first voice said, “Who’s Jennifer Rees Larcombe?” The other replied, “Oh you remember, she’s the woman who had the miracle. She was in a wheelchair for eight years, but was suddenly healed at a meeting where she was speaking.”

I thought, “Oh dear, after 25 years, is that still the event which defines me?”

While I can see that what happened to me at 3:15pm on the afternoon of 13 June 1990 entirely changed the circumstances of my life, it was not such a glorious event as you might imagine.

Eight years previously, I had contracted encephalitis, which disabled me through damage to my central nervous system. Bringing up six young children from a wheelchair had been extremely hard, but they were good kids, who had a brilliant dad, so with state benefits we managed.

The family were stunned into silence when I arrived home that June day, carrying my own wheelchair. Bewildered, they watched as I dashed round, cooking for the first time in years and even ironing! Finally my 22-year-old acidly remarked, “If God can do this for you now, why didn’t he heal you before, when we needed you far more?”

For weeks I bounced like an ecstatic Tigger, but neighbours eyed me suspiciously. One asked if I had a twin sister in a wheelchair. Another said, “I suppose you were OK all along, you just staged this to publicise your books.” I had become a best-selling author, which meant I was quite well known as the ‘writer (and speaker) in the wheelchair,’ so the healing did indeed catapult me right into the public eye. I had reporters and TV crews on the doorstep and endless requests to write articles or speak at events all over the country – and beyond. I could have avoided all the media hype, but I longed to tell people that God still intervenes in ordinary people’s lives.

I quickly realised, however, that I was infuriating the Christians who believe miracles no longer happen. Doctors, who demanded to see my medical records, explained them away by saying they must have been muddled with another patient’s notes. The truth of my story was debated publicly via TV and newspapers because when people don’t want to believe in a God who does miracles, they can always find an alternative explanation.

Many people were genuinely delighted by the news, including our Christian GP, but I minded terribly about those who had, themselves, prayed long and hard for healing. Might they feel God had rejected them? Worst of all, some people put me on a pedestal, assuming I was a saint with mega faith – which I definitely knew I was not!

I’ve often been asked, “If God can do the kind of miracle he did for you, why doesn’t he do them more often?” My reply has always been, “Because he’s too kind!”

Obviously Jesus used miracles to proclaim who he was, but they often caused arguments or distracted people from the simplicity of his message. Crowds followed him, hoping for excitement and free meals, rather than listening to what he said about God’s love and offer of everlasting salvation.

Of course, I’m grateful for my healing! It was wonderful to be well and full of energy, but I didn’t only want to tell people about physical healing because I had come to believe God wants to do something so much more for us than that. The miracle I wanted to tell people about had happened to me six years before the one in June 1990, and had a far greater impact on my life.

When I first became ill, I was convinced God would heal me. I read books which said if I prayed hard, praised, forgave, confessed hidden sins and irradiated spirits of infirmity, then God was bound to heal me. But he didn’t! Angry and disappointed, I turned my back on him.

It was the day I slithered into a pool of cow dung that I experienced that first miracle. I was alone and hopelessly stuck in stinking muck, screaming my frustration at God for messing up my life!

Suddenly I became aware of his love, completely surrounding me like an adoring parent holding a turbulent child. I don’t think I ever felt so loved in my life. “I know about the pain you’re in,” I felt him say, “but I want you to let me into the centre of it so I can help you.” As I sat very still in that dung, I realised my resentment and distress were filling my life and slowly poisoning me.

I have come to believe that we all have a secret place – deep inside, where we stuff all the feelings we don’t want others to see – or own to ourselves. Disappointment, resentment, fear and shame ... all the things we’d hate others to see are pushed into a secret cupboard inside our hearts and the door is securely locked.

I’d been hiding pain like that all my life, but that day I dared to open the ‘cupboard’ and allow Jesus to come in and begin his miracle of healing. He didn’t change my outer circumstances, but he totally altered the way I thought and felt about them.

Since that day I have seen thousands of other people exchange their painful emotions for the same kind of supernatural peace that flooded through me that day; a strength which gets you through ‘the impossible’ and the kind of happiness which the Bible calls joy.

That is what I’ve been preaching for the last 25 years – and ministering to people at my Healing Centre, Beauty From Ashes. I’m deeply grateful for my healing miracle because it gave me the chance to speak about the other, earlier miracle in the cow dung! I firmly believe emotional wounds are far more crippling than physical injuries and disease; and healing from them lasts longer – throughout eternity!

So, to conclude, I believe God does miracles constantly – I watch him do them most days! The physical kind definitely attract more publicity – and controversy – but the lasting freedom and transformation of invisible miracles bring far more people to faith in Jesus.

Find out more about Jennifer's ministry at Beauty from Ashes