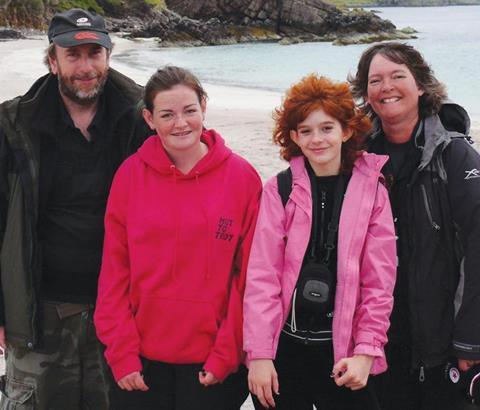 It’s never easy being a parent, but the teenage years can present a particular challenge. Amanda Pilz talks to some parents about the challenges they face, the mistakes they’ve made and what’s worked for them

Lesley Coates is a part-time church administrator. She lives in Kent with her husband Jonathan, a store manager. They have a daughter, Emma (16) and a son, Mark (20).

OUR APPROACH I made sure I had a lot of control over my teenagers because I didn’t want them to experience what I’d been through at that age, such as drinking, taking drugs, lying through my teeth and so on. I put strict boundaries in place so they couldn’t stay out late. At 16 they had to be in by 6pm and at age 18 the deadline was 8pm.

This wasn’t easy for Mark. He once told me that when he was 16 he hated me and used to pretend his pillow was my face, punching it hard in anger, because his friends were out having a good time while he had to stay in. But when he reached 18, I told him he could do whatever he liked. So he did, for six months!

It hasn’t been plain sailing for my daughter either, but in comparison she’s easy. She focuses on God all the time and is all out for the down-trodden. She once told me, “I’m always going to choose Jesus.” She supports other teenage girls her age who fall pregnant, accompanying them to the doctor and so on. She also wants to travel and work with street kids. She’s academically bright and is doing five A levels.

WHAT WORKED Jonathan and I got around the problem of peer pressure by making our house the place our kids came to with their friends. That way, we could see what was going on! We’ve always had an open house, but we made it clear that we’re Christians and have strict rules about behaviour when their friends came here. I still have a sign on the wall which says, “If you’re smoking, you’d better be on fire!”

I also made sure I got to meet all the kids they brought home and we monitored what they did and when they did it, including access to computer games.

OUR BIGGEST MISTAKE I’ve always given Mark and Emma lots and lots of my time, even giving up work to do so, but my biggest mistake was always worrying about what other people thought of me. I thought if my children were bad, then it must have been my fault. In church there always seemed to be someone who would have done things differently. I often felt disappointed with myself and experienced guilt, thinking I hadn’t prayed enough for them etc. Yet every day I read the Bible to them. I did what I thought was right at the time.

WHAT WE’VE LEARNED The big lesson has been that I can’t have a day off! It’s a lifetime’s commitment and no matter how old my kids are my love and concern for them never ceases. I also think it’s vital to pray for them constantly. Through prayer, God can change negative cycles in whole families. I know, because he’s done it in mine.

Alastair and Faith Jakeman live in York. Alastair is a charge nurse in A & E and Faith is a women’s health physiotherapist. They have triplets Ellie, Beth and Tom (14).

OUR APPROACH We want our teenagers to grow up to know Jesus. This is a big challenge in a society which doesn’t believe in absolute truth. So we pray for, and with them, encouraging them to see God at work in their own lives. We try to do a Bible study with them as often as possible and aim to fully involve them in the ministries of our home such as hospitality, prayer and running a home group. Home group is really good for this because they see godly examples of all ages and learn how these friends cope with everyday ups and downs.

WHAT’S WORKED We’re really happy that they still want the family times and love doing things with us, like watching a DVD, having a take-away, or going for a walk! (With the proviso that it’s not one of dad’s long walks!) We recently went to a Phatfish concert together. It was great to be there really enjoying ourselves and then playing the new CD over and over again in the car on the way back. We also make sure we include them in the choosing of family activities, rather than imposing our choices on them.

We aim to have one-to-one time too, as the tendency with triplets is to always lump them together. It’s important to recognise the specific needs and concerns, as well as the strengths and challenges of each child.

OUR BIGGEST MISTAKE It would take forever to recount all the mistakes we’ve made! Probably the big ones are not praying or depending on the Lord enough, not controlling our own sin before we try to control theirs and not saying sorry to them as often as we should have. It’s so easy to do the right thing in the wrong way and fall into anger and frustration in just the same way they do. We do get quite positive feedback from them, such as, “We appreciate knowing what’s right and wrong and discussing things together, like what goes on at school”. They tell us they love us, but we also get the, “You just don’t understand” moments!

WHAT WE’VE LEARNED We’ve realised that we need to pay serious attention to our own sanctification if we’re going to do the right thing for our kids. We need to examine ourselves and humbly be willing to change. If we have the right attitudes, it can have a profound impact on our children. At the same time, we’ve learnt how merciful God is and that our kids can still turn out right despite us, which is a huge relief.

Jaco and Karin Pitzer live in Pretoria, South Africa. Jaco owns a security business and Karin is a stay-at-home mum. Their children are Wouda (21), Heike (19) and Jaco jnr (15).

OUR APPROACH I think in retrospect Jaco and I have been quite naïve about teenagers and what goes on in their world. I would drop them off at church, thinking they were going to a youth meeting, whereas they were actually going to be picked up by a friend and taken to a party! My daughters might say they were taking something to a friend’s house, but in fact they were sneaking off to see a boyfriend we didn’t approve of. We’ve found alcohol stashed in their rooms and even discovered that our kids, who weren’t licensed to drive, had given their drunken friends a lift home. At the time we weren’t aware of any of this! We didn’t know we were being lied to and just trusted their word.

Our approach with Wouda was to be very strict in order to protect her from the dangers. Looking back, I think it would have been better to have just let her go where she wanted because at least we would have known where she was and could have gone to fetch her if things had started to go wrong. We were much more permissive in the way we brought up our second-born, Heike, whilst hoping and praying she would learn to be responsible, and we’re still feeling our way with Jaco jnr. It’s a blessing if nothing bad happens to them while they’re on this journey.

OUR BIGGEST MISTAKE We think where we went wrong was not allowing them to make their own mistakes. We sought to prevent the mistakes, so of course it was harder for them to learn from them. For example, I once rushed into school with a project they’d forgotten. We also wish we’d been able to bring up our teens in an environment with people who have the same values and beliefs as us. My eldest daughter was in classes where a lot of the children listened to heavy metal music, and now she’s in a relationship with someone who’s into all of that and who isn’t even a Christian. She’s torn in two because she wants to come back to God, but doesn’t want to lose her boyfriend.

WHAT’S WORKED More positively, they often tell us they’re very thankful for the love and Christian values we showed them, such as teaching them how to work with money and to work hard. They also like the fact that I didn’t work and was available for them and talked to them a lot. They even say they’re sorry for the wrong things they did. They definitely come back to the good you’ve taught them, so I think we must have got something right!

Katharine Shaw is a college administrator and is married to Dave, a former assistant pastor. They live in Hertfordshire and have two daughters, Karen (15) and Laura (11).

OUR APPROACH We find much of the challenge of bringing up teenagers is that their friends have different, or no values and their teachers have no faith. But thankfully, both our girls are pretty good at evaluating what they read and watch, and assessing it from a Christian point of view.

We’ve achieved that mainly by talking with them a lot – often around the meal table. We get nothing from the question, “How did you get on at school today?” but when we start asking specific questions such as, “What happened in RE?” the conversation starts to flow. They might say “Miss said this and I don’t think it’s correct.” So they’re happy to say the teacher’s wrong and we’re happy to say our kids are right!

WHAT'S WORKED From the beginning we’ve put a lot into our children concerning faith and we encourage them to make friends with non-Christians, as well as with Christians. Karen sees it as an opportunity to do evangelism, which is amazing! She’s a tremendous evangelist and is quite happy to practise the spiritual gifts. She learnt to use them at Sunday school, where they asked God for pictures and got them! They also talked about what went on at school and how they could directly apply their faith to situations there, so they could see the relevance of faith in everyday life.

Laura is a different kettle of fish and far more likely than Karen to question things. God answered our prayers for her to meet a good Christian friend at school and things are pretty straightforward at the moment, but we don’t know whether we’ve yet to hit the turbulent years!

OUR BIGGEST MISTAKE I’m sure we’ve made loads of mistakes along the way. One thing we did wrong was assuming Karen would always come to the same church as us. When we left our old church, she said: “Well, I was only going to give it one more week,” and we had no idea that was what she’d been thinking. It’s really brought it home to me that she’s her own person. I realised it can be difficult for kids coming from Christian families because they’re not making their own decisions and bucking the trend. It isn’t all easy.

WHAT WE’VE LEARNED All parenting is hard because as they change and grow the hard bits change with them! There’s no room for boredom though because the goal posts are always moving! But that’s part of the wonder of the development of human life and we just have to go with it.

Recommended reading by our interviewees

* Ann Benton’s recent book Teenagers. (Parenting teenagers through the eyes of the book of Proverbs)