How do you react under pressure? 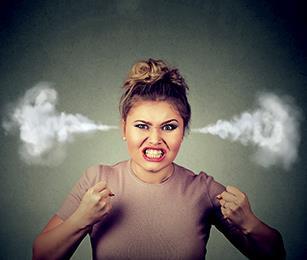 Sometimes it’s the little things that undermine our Christian witness. Anne Le Tissier considers an example from the life of David

King Saul is once again chasing David. His army are camped outdoors and the Lord brings a deep sleep onto them (1 Samuel 26:12). Watching from their hideout, David’s companion, Abishai, offers to strike Saul dead, but David resists the temptation. He does, however, sneak into the camp, steal Saul’s spear and water jug, and slip away to a safe distance.

Calling out to King Saul, he proves from the evidence of what he’s just done that he has no intention of harming him.
It is much like chapter 24, where David held back from taking Saul’s life when he relieved himself in a cave in which David was hiding; and that, despite being urged by his men to see it as a God-given opportunity to take the promised throne.

A man after God’s heart indeed, trusting his Lord to avenge injustice, and fulfil his will in his perfect way and timing.
And yet, sandwiched between these encounters is the story of Nabal and Abigail, which portrays David’s more natural reaction to seek revenge!

David sent men to ask wealthy Nabal for provisions in return for guarding his vast flocks, but Nabal cursed and insulted the man who had made the request.

“Who is this David? Who is this son of Jesse? Many servants are breaking away from their masters these days. Why should I take my bread and water and meat I have slaughtered for my shearers, and give it to men coming from who knows where?” (25:10–11).

Ouch! David wasn’t just an innocent man on the run from a raging king; he now had to contend with a mean, surly character, who ignored customary hospitality and the generous festival nature of sheep-shearing. And David’s natural reaction erupts:

“’Put on your swords’. So they put on their swords, and David put on his. About four hundred men went up with David … ‘It’s been useless – all my watching over this fellow’s property in the wilderness so that nothing of his was missing. He has paid me back evil for good. May God deal with David, be it ever so severely, if by morning I leave alive one male of all who belong to him’.” (25:13,21–22).

How can a godly man like David be so restrained and upright at certain times (Chapter 24 and 26), yet so vengeful and reactionary at others (Chapter 25)?

Learning from the story: Be aware of stress
Last month, Chapter 25 reminded us of our high and holy calling as Christians who bear Christ’s name. It is quite a responsibility, though thankfully we are not alone and have the Holy Spirit to guide and transform us.

Nevertheless, life brings its pressures and resultant stress, tension, hassle and strain. Whether it’s from people or circumstances, we can often feel pushed over the brink, giving into our feelings and natural responses. And perhaps that’s what happened to David.

Saul and the army were baying for his blood, while a wealthy citizen insulted and rejected his integrity and needs. Boom! David’s pent-up frustration erupted, inciting him to take matters into his own hands.

But if he had, he would have committed murder; killing Nabal and many innocent men – Nabal’s sons, nephews and servants perhaps (25:22). Men who were possibly obliged to work for the wealthy fool through no choice of their own, and who’d suffered his brash nature for years. David would have made a tragic mistake if Abigail hadn’t intervened (25:18–31).

Furthermore, such a violent retaliation would have diminished David’s reputation among the people with whom he was popular, and it may have deterred others joining his cause at a later date. David would have shown himself to be little different to Saul – the king he was called to replace, who had failed in his own calling by always putting his honour and feelings above the good of God’s people and purpose. If David had massacred Nabal’s household, he’d have been no better than Saul who massacred the innocent priests of Nob (22:6–23).

What about us? How do we tend to react when we’re stressed or under pressure? And how does that hurt or influence others?

Learning from the story: Avoid double standards
Compared to Saul’s murderous rampage against David that threatened his actual life, Nabal had merely caused offence with insulting words and selfishness. So why did David show more restraint against the murderous King Saul than local citizen Nabal?

David repeatedly promised that he would not harm the Lord’s anointed. God had anointed Saul as King just as he had anointed David to succeed him, and David was able to restrain himself from pushing that succession ahead in his own timing rather than trusting for God’s. But when it came to Nabal, the farmer, David reacted very differently despite no threat to his life.

What about us? How do we behave and respond to people with an esteemed leadership role or gifting, to fellow Christians or to those we serve in a church environment? And how does that compare to what may be more natural responses at home or at work, when we are barged past by someone jumping the queue, frustrated with a delay at the checkout, or cross about an error on a utility bill?

The name ‘Christian’ – Christ follower, child of Father God – is a high and holy name to uphold with all people and in all circumstances.

I’m not saying that impatience, hurt or frustration won’t get the better of us at times, it certainly does with me! But perhaps this story urges us to seek to uphold the integrity and grace of God no matter the pressures we’re under, who we are with, our perception of them, or what we are doing. And we do that by seeking to walk in close and right relationship with Jesus.

Further reflection: Rising to the Challenge
Be teachable
Abigail lost no time in preparing gifts for David and his men, and taking the blame for her husband’s action; but she also counselled David with truth to help him see the situation for what it was, and the future God had called him to (25:18–31).
David responded by laying down his sword. He had a teachable spirit, even when the advice came from a mere woman; a person with low status in that era. It marks him out from people who erupt and react without further thought, who lay down their rights, scream and rant, but refuse to listen to wise and godly counsel.
What about you?

REMEMBER: “The way of a fool seems right to him, but a wise man listens to advice. A fool shows his annoyance at once, but a prudent man overlooks an insult” (Proverbs 12:15–16).

Be humble
Chapter 25 reveals David’s natural tendency to seek revenge, but from the stories in chapters 24 and 26 we see another side to him; that which was sensitive and disposed to God’s character, timing and will.
What about you?

REMEMBER: “… I urge you to live a life worthy of the calling you have received. Be completely humble and gentle; be patient, bearing with one another in love” (Ephesians 4:1–2).

Count to 10!
Last month I suggested ‘counting to ten’ before speaking or reacting when we are angry, hurt or frustrated. And it can certainly help as it acts as an enforced halt to a reactive flow of harsh words or behaviour. But, ultimately, we will struggle to live up to our high calling when faced with life’s pressures if we rely solely on our own effort. Jesus said, “Without me you can do nothing” (John 15:5). This doesn’t just refer to our ‘doing’ but also our ‘being’ – being a visible and audible reflection of his character, love and ways.

A meaningful complement to counting to ten is to memorise God’s Word, bringing it to mind when stress levels rise, allowing it to inspire and transform our response. As Psalm 119 reminds us, “How can a young man keep his way pure? By living according to your word ... I have hidden your word in my heart that I might not sin against you” (vs 9,11).

REMEMBER: “When words are many, sin is not absent, but he who holds his tongue is wise” (Proverbs 10:19).

“Everyone should be quick to listen, slow to speak and slow to become angry, for man’s anger does not bring about the righteous life that God desires” (James 1:19–20).