From free school meals to CEO

The new chief executive of Jubilee+, Natalie Williams, talks to us about imposter syndrome, and why taking up the role feels like a prophetic statement. 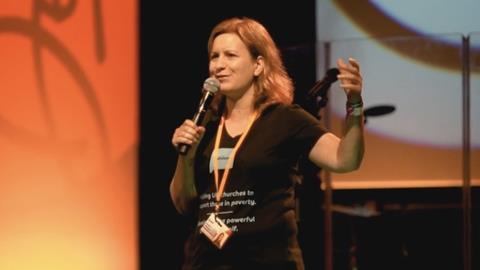 When I was a kid, we lived on the 16th floor of a block of council flats. We didn’t have central heating, and shared one phone on the ground floor with everyone else. I had free school meals at primary school and went to the roughest secondary school in the area.

If anyone had told me back then that I would one day become the chief executive of a national charity, it would have baffled me. It isn’t simply that it would’ve seemed unattainable for someone like me. I wouldn’t have understood why it was something to aim for.

So when Martin Charlesworth, founder and CEO of Jubilee+, started talking to me last summer about his plans to step down and hand over the leadership to me, I was astonished.

A charity that champions the poor

Jubilee+ is a Christian charity that equips churches across the UK to support those trapped by poverty or injustice in their communities. It was set up in 2011 in the Newfrontiers family of churches, after the financial crash of 2008, and the following recession and austerity measures.

Today Jubilee+ works with churches across many denominations. We hold an annual conference called Churches that Change Communities, write books, conduct research, offer training, facilitate networks on specific issues, influence policy and more. We are a small charity, but God has opened many doors to us so that we can ‘punch above our weight’.

Those initial conversations about me taking on the chief executive role took place many months ago, but I still find it hard to believe it’s really happened. With great wisdom, Martin set a long transition period, and that has been really helpful to me, mostly psychologically and spiritually. It took several weeks for me to stop thinking: “How can I lead like Martin?” We are so different – in our personalities, our temperaments and much of our life experience, since Martin grew up in relative privilege.

It wasn’t just my background that gave me a sense of ‘imposter syndrome’. I’m a single Christian woman, and there aren’t many of those in senior leadership roles. While in recent years I’ve got to know and be inspired and encouraged by many women who are much farther ahead of me in leadership, wisdom and maturity, I haven’t met many other single ones.

Yet as I expressed my worries to friends and to God, I was repeatedly reminded that we in the Jubilee+ team have long had a deep desire to see people with my sort of background, and who don’t fit the traditional mould, in leadership positions. That’s why, as a team, we believe there’s something prophetic about me taking on the leadership role. I couldn’t have imagined it as a child. It’s hard to imagine even now it’s happened. But I absolutely love that God takes the unlikely, the lowly, those who on paper might not fit the bill, and delights to confound the wisdom of the world by raising them up.

Looking to the future

So as Jubilee+ begins its second decade, we want to play our part in equipping churches not just to alleviate poverty, but to see the fulfilment of God’s vision for those in poverty – that we might ourselves become oaks of righteousness, bringing him glory as we renew, restore and rebuild the people and places others would write off.

Natalie Williams is a former journalist who grew up in one of the most deprived areas in England and is now CEO of Jubilee+. She has co-written three books: The Myth of the Undeserving Poor (2014), A Church for the Poor (2017) and A Call to Act (2020). To find out more about Jubilee+ visit jubilee-plus.org