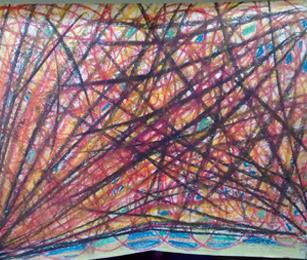 Tap into your creativity and let God speak to you. Liz Jennings shares her experience of using colour in prayer ...

When I booked into a local retreat for a Saturday afternoon, I think it’s fair to say I was feeling pretty desperate. Our second child’s emergency birth had almost killed both him and me. I was traumatised, depressed, struggling with the most wilful toddler I’d ever met (my own!), and spiritually flatter than any of my pancakes ever turn out.

I had no idea that a pack of coloured pencils and some sheets of blank paper were about to turn everything around for me.
The retreat was led by Helen Connoll, a spiritual accompanier and assistant chaplain at The Living Well in Nonington. There were about five of us there that day – all women. We sat quietly in the lounge of the detached rural house, exchanging (in my case) slightly nervous smiles and polite, small talk with one another.

Helen led us in an opening reflection and then sent us off. “Take some colouring pencils and paper with you,” she encouraged, “And allow God to speak to you.”

I eventually settled in a small, upstairs room. I sat there, staring at my blank art pad, wondering what on earth to do with it. I was exhausted, burned out by life, feeling overwhelmed, afraid for the future and more than a little frustrated. What good could colouring in possibly do?

I took the colouring pencils out and began to dash lines across the page. It felt quite good. I swapped colours and scribbled some more, the frustration and upset I was carrying slicing across the blank paper, filling the white with a rainbow of angry colours.

Without thought, I rushed the lines out, colour upon colour and in the madness of my windscreen-wiper action, I felt as if all the anger in my body was rushing down through my arm and out onto the page.

By the time I stopped pasting the page with lines, I was crying freely. I stopped and stared through wet eyes at my ‘picture’, and that was the moment when revelation hit: this crazy, wild, over-full image was just how my life felt. But where was God in this picture? At first glance, I had no room for him.

I took a clear blue pencil and, where tiny patches of white paper remained, I began to fill the space. At first, I only found thin spaces at the edge, but as I continued to look, I began to see that there were spaces throughout and in between the madness of the scribbling.

A fresh thought hit me: crazy though life felt right now, I could find spaces for God. I just needed to allow God into the general madness – not expect great long times of peace and clarity in which to meet with him – and he would give me these tiny patches of deep rest, soul refreshment and love that I so desperately needed.

I’ve since learned a little more about the way our brains work and it’s deepened my understanding of what went on between God and me in that little room that day.

Now, I’m about as scientific as a banana, but, in short, it seems the left side of our brain controls our logic and reasoning, while the right side of our brain is creative. When the two work together, we get quality controlled creativity. However, research has shown that 80% of Westerners are left-brain biased, and that we frequently leave our right brain lying unused, or suppress its activity.

That simple act of colouring had allowed the right side of my brain to express something deep, before I had the chance to stop and think about anything. The analysis of the drawing came after its creation.

If I’d thought about trying to create something which would express my need for God amidst the chaos of my life, I would probably have got all tangled up in trying to produce something ‘good,’ and the results would have been tampered with by my imposed left-brain logic. Most crucially for me, I wasn’t even aware on a conscious level that this was how I had been feeling deep down: the process of drawing had unlocked something.

Helen Connoll believes that the process of using colour is a brilliant way of allowing things that are stored in the body to come out, and she’s very clear on the importance of artistic ability.

“It’s nothing to do with art! It’s about using crayons and paper to express emotions and feelings. If I’m drawing people, they’re stick people – that’s all I can do! But it doesn’t matter, being artistic is not the point.”

Indeed, being ‘good at art’ can be a hurdle to overcome. Professional painter, Emma Blackwood, also paints as part of her worship and prayer life, and overcoming self-consciousness is something she’s had to address as part of her adventure into creative prayer.

I got to know Emma through church connections here in Canterbury and she told me: “Because everyone knows that I’m a painter, I can feel the pressure of having to produce a work of art every time – and the fact is, I don’t. Often I think, this is pretty rubbish – but I just have to get over myself and leave that behind.”

Emma’s courage in stepping out to seek God’s Word through colour led her to approaching a canvas in a completely new way.

“I went to the back of the church building (a warehouse, at the time), where there were some canvases lying about and I said to God, ‘I want you to show me what I’m meant to be painting’. In my job as a painter, I’m the one in control and I wanted to give up that control and put it in God’s hands.

“I felt God say, ‘Put down your palette knife,’ so I just used my hands and the paint. It wasn’t like I was in some kind of crazy dream-like state; I was just painting, going with where I felt God was leading my hands.

“I know paint. I’ve worked with it for years and I know how it behaves, but there were times when the paint actually wasn’t adhering to the surface of the canvas in the places where I thought I should be putting it. I’d try and put paint in areas, and it just wouldn’t stay there. That was really exciting! I knew God was working in it, and I knew he was present.

“What came out was a very different style to the way I normally paint, and I felt I didn’t own this painting at all. I shared it with the congregation, and it spoke to a lot of people. They saw different things in it, which was really amazing. Some had seen angels, others a ship. I found it so encouraging.”

If Emma had stopped and evaluated her painting, there’s no doubt the result would have been different.

“We need to get over that self-consciousness and anxiety, and get out of the way of ourselves, in order to allow God to speak to us in really powerful ways. A visual prompt can be incredibly powerful as a trigger. We have to take a risk and say, ‘I won’t care about what other people think of me or my work, I’m just going to let God speak.’”

The benefits, both publicly and privately, of using colour as we pray and worship can be life-changing, as they were for me that day at The Living Well.

Helen Connoll sums up her experience of using these techniques over the last 20 years. “Given that all life in a sense is a healing journey, and you work through different things throughout your Christian life, it has enhanced my progress and my coming closer to God.”

+ To find out more about The Living Well, where Helen Connoll is assistant chaplain, click here

Try it for yourself!

• Don’t wait until you’ve practised, or feel inspired – do it today: pray with blank paper or canvas in front of you. Use crayons, paints, pens, coloured pencils – whatever appeals.

•  Don’t expect or try to produce a neat and tidy masterpiece!

•  Do expect to sense God’s presence and his leading you. Ask him to direct your hands, and to speak through what you will create together.

•  You may enjoy doing this with a trusted, praying friend as sharing your work will shed more light, and may bring light to others in the process.

• If you want to learn more, Emma Blackwood recommends the work of Theresa Dedmon – Cultivating Kingdom Creativity and Born to Create.