Dilemma over my dying dog 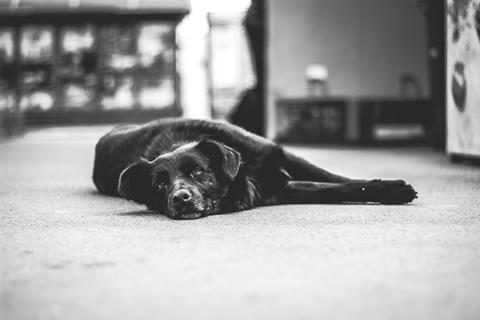 I had my dog Simba from nine weeks old, before he could even walk on concrete. I didn’t realise then that you can’t just get a dog and put him on the floor - because they can pick up a virus that could be fatal - so I had to take him to the vets to get shots. He’s a Rottweiler-Bullmastiff cross so he’s a big dog but back then he was only slightly larger than my hand. That was nine years ago.

People see Rottweilers as vicious dogs so I read up on Rottweilers and Bullmastiffs to make sure I understood his characteristics and traits so that I could train him properly. But I think I’d seen too many films where dog owners just said “Sit!” to their dogs and they would obey. So I started saying “Simba, sit!” to Simba and he would just stand there looking at me as if to say, “What? Is that my name? Is this a game? What are we doing here?”

When he was one-and-a-half I was in the park and he was just wouldn’t do what he was told but another dog owner noticed my frustration and said at Simba's age he's still learning. He helped me realise that he wasn’t yet fully trained to understand how to behave in public spaces. He got big really quickly and because I have lots of nieces and nephews I had to train him not to run at them because they would be scared. I taught him to lie down on his stomach and wait for them to come to him because even sitting down he was still so much taller than them. This also helped when we came across children in the park.

There’s definitely a thing about black people being afraid of dogs because of the history of black people being set on by police dogs and slave masters training their dogs to attack runaway slaves. Sadly, that has been passed down to many black families and the thinking is still very prevalent today. One of the reasons I thought I'd better get a dog is because I was applying to be a police officer for the Metropolitan Police, and I live on an estate. I thought it would probably be good to have a bit of presence and thought people would be less likely to mess with me if they knew I had a big dog at home.

Simba has always been a really energetic dog but at the end of last year he seemed to become old really quickly. I used to take him for long walks in the morning and evening but then he stopped having the energy to do both so I just took him once a day. I was shocked when the vet called him geriatric! He told me I probably had two years left with Simba and it was absolutely heart-breaking. In my head I was thinking, "this might be the last Christmas" and then it got to spring and I thought "this might be the last summer". And then it was.

Ages ago I watched the bit in Marley and Me where the dog kept disappearing down to the bottom of the garden and hiding behind the tree because he was ready to die. At the time I started looking into buying a house with a really nice tree in the garden and I felt that one day if Simba did feel ready to die then he would go to that tree. But when he started doing that in parks, it shocked me because I thought, “What are you doing there? Come back, I’m not ready for that.”

Simba developed an injury to his front right shoulder joint and then he started to limp and it was so horrible to watch because I could see he was in agony. He made this terrible sound that I’ve only ever heard once or twice in the whole nine years I’ve had him and I felt absolutely helpless. I called the vet in tears to get some emergency pain killers and the vet gave them to me but also said, “It wouldn’t be unreasonable to euthanize” and it really took me by surprise. This wasn't how it was supposed to end.

But vets love animals so I knew he wouldn’t have said it if he didn’t think it was the best thing for Simba. I was clinging onto the hope that he would miraculously get better but I felt deep down that Simba was kind of telling me; he was tired, it was time.

As a Christian, I really struggled with the concept of taking away a life. I couldn’t reconcile with the idea at all. Then I began to wonder if it was different with animals? It was a real internal struggle and I ended up speaking with a bishop who was also, crucially, a dog lover.

Together we considered Scripture references to man having dominion over animals and the commandment to not kill, and what it means to actually kill someone. I felt guilty because I thought, can you say, oh, my dog “passed away” when I was involved in that process? We spoke about how I was feeling and he listened and empathised. He reassured me that God knows and doesn't blame me - that was important. By the end of our conversation I felt peace about my decision.

I don’t believe God sees it as killing but, in case I was wrong, I asked God to forgive me while Simba was slipping away in my arms. God knows my heart, He knows I was trying to do the right thing for my dog who was barely living towards the end.

Simba has been gone for six weeks now and I still think about him every day. This whole experience has made me think, if we can do this for animals, what about humans? What about people you don’t want to suffer? I’m still working through this thought process and I think if someone asked, I still wouldn’t condone it but I wouldn’t judge it either.

Selene Jordan is a presenter on Premier Praise. Find Selene on Instagram and watch the full interview here

Photo by Pavel Anoshin on Unsplash