Carrie Grant: "This is extreme parenting" 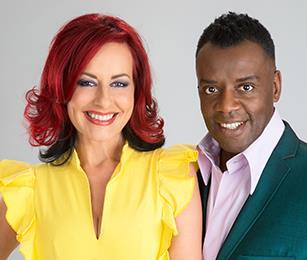 You may recognise Carrie Grant as a reporter on BBC1’s The One Show. You might have spotted her husband David Grant presenting Songs of Praise. Or perhaps you know the couple from their decades of music and TV work, including working as vocal coaches on Pop Idol and Fame Academy, and releasing their own MOBO Award-winning gospel album Watching and Waiting.

Although they’re busy with presenting, singing and coaching, Carrie and David devote a lot of time to charity work and advocacy. Carrie has spent many years raising awareness of Crohn’s disease, a serious inflammatory bowel condition she has lived with since the age of 18.

However, she’s currently concentrating her efforts on becoming a voice for children with hidden disabilities, with a particular interest in girls on the autistic spectrum. She speaks from a great deal of personal experience, as Carrie and David have four children aged between 22 and seven, each of whom has a different set of additional needs.

“Olivia is 22 and has attention deficit hyperactivity disorder (AD(H)D) and dyspraxia (which affects co-ordination), with some mild autistic traits and social anxiety,” explains Carrie.
“Talia, 15, has high-functioning Asperger’s syndrome (on the autistic spectrum) and dyscalculia (a learning difficulty with numbers). Imogen is 11 and is autistic (a developmental disability that affects how people perceive the world and communicate with others) with Tourette’s (a neurological condition characterised by involuntary tics). And our adopted son Nathan, seven, has attachment difficulties, AD(H)D and dyspraxia.”

Although the couple were aware that their eldest daughter Olivia had problems with concentration, always fidgeting and getting into trouble at school for not listening, she wasn’t diagnosed with AD(H)D until her late teens. But she hasn’t allowed it to hold her back and she’s doing well in her acting career.

“With Talia, however, we knew early on that something was different,” recalls Carrie. “As a baby, she didn’t like to be cuddled, didn’t show much expression or make eye contact, which is typical with Asperger’s. However, I realised she was fixated on my hand. As a mother, I try to follow my intuition – I don’t think we trust our intuition enough, because it’s not measurable – and I learned to connect with Talia using my hand almost as a separate personality.

“With Imogen, we initially thought she might be deaf, but she was diagnosed with autism when she was three. She develops obsessions. At one point, she was obsessed with buttons – she’d go up to strangers and start undoing their buttons if we weren’t careful! But she’s resilient, she’s a little bulldog and I’m determined not to let her lose her character.”

Struggling against the system
Sadly, the greatest stress of caring for her daughters comes not from the children themselves, but from fighting to get them the understanding and support they need. It used to be believed that many more boys than girls were on the autistic spectrum. Current thinking is that the numbers are roughly equal, but girls aren’t being diagnosed.

“A huge percentage of autistic and Aspergic girls slip through the net because the criteria for diagnosis is based on the characteristics displayed by boys,” explains Carrie. “Girls often present differently, so they’re not picked up and don’t get the help they need. Talia has had real problems at school. She’s a beautiful, magical creature, but she can’t act like a ‘neurotypical’ child. She’s not suitable for a special school, and mainstream schools are often unwilling or unable to be flexible, so she ends up at home a lot of the time. Forty per cent of children with autism are excluded from school informally or illegally – they’re punished for their condition.

“I’ve sat in hospital with Talia on suicide watch five times in the last 18 months. Many girls on the autistic spectrum develop mental health problems such as eating disorders, caused not by their autism but by the lack of understanding and treatment by others. It’s been estimated that over 80% of young women in prison are on the autistic spectrum. Is it not enough for my children to be autistic – do they have to end up with mental health problems as well?”

David and Carrie set up and host a monthly support group for parents of girls on the autistic spectrum, to share experiences and strategies – and they’ve discovered their experiences are far from unusual. “We have to become super-parents,” she says. “But the biggest battle is with schools and local authorities, and trying to access the services our children need. It’s very isolating.”

The decision to adopt
You may wonder why, when already dealing with the challenges of raising three daughters with special needs, Carrie and David would decide to adopt. But Nathan’s arrival in the family didn’t follow the normal pattern for adoption.

“A friend who is a foster carer told me about a toddler in her care,” says Carrie. “As a mixed-race boy, about to turn two years old, she knew Nathan’s chances of adoption were very low, so she asked if we’d consider it. Our first reaction was, ‘Well, the answer’s not no…’ Strangely, when I saw pictures of Nathan, I noticed he had the same distinctive pram and cot as Olivia had. Eventually we discovered it was Olivia’s pram and cot, which had been passed on through several families and eventually held our future son!

“We applied for adoption assessment in June 2011 and in the December, Nathan came home. He’s made massive strides, but he struggles with attachment due to early life trauma. When someone is neglected or abandoned, they often carry a level of shame that’s hard to beat. It’s important to find positive ways of communicating. If Nathan behaves badly, sending him to his room doesn’t work and could traumatise him, so we’ve learned a strategy called ‘non-violent resistance’. Instead of telling him off, we stage a sit-in in his room! We explain that we love him and will do everything we can to help him avoid a certain behaviour – then we wait for him to come up with his own strategy. It’s effective, and we’ve learned a lot from parenting Nathan that helps us with our other children.

“During adoption training, we were told some children have life-long issues that you can’t just ‘love out of them’. It was disheartening, but I see now why they say that. Sometimes, you have to just love someone without trying to change them. This is something a lot of churches could learn from. Churches’ primary goal is often to change people, but if we accept and love people as they are, they’re more likely to make changes themselves.”

Listening to the autistic voice
Having to become experts in parenting children with complex needs and develop different strategies for each child (“This is 24/7 extreme parenting!” she says) has led to Carrie becoming a spokesperson on the subject. She has spoken at several national, medical conferences and at the Houses of Parliament, and she has collaborated on the launch of a booklet called Girls and Autism: Flying Under The Radar. But far from seeing autistic people as a problem to be ‘dealt with’, Carrie believes we have a lot to learn from those who see the world differently.

“We tend to hear only from parents and professionals – we rarely hear directly from people on the spectrum,” she says. “I think we need to hear the autisic voice, without trying to edit or ‘normalise’ it. In somewhere like Silicon Valley, autism is neurotypical. Maybe they’re just more evolved than us!”
David and Carrie, who have both been Christians for 30 years and run a church plant in their home, also believe the Church could benefit by listening more to autistic people.

“I’ve learned a lot about God through parenting children with special needs,” says Carrie. “In church, we’re often encouraged to judge ourselves harshly and assess our ‘performance’, but I’ve realised God doesn’t see us like that. My kids will never fit the box, and that’s OK. I’ll never fit the box either, and I need to apply the same love and kindness to myself. I don’t need to be perfect – God loves me as I am. I’ve also learned from Nathan that shame has no place in relationships. In church, we often trade in shame and guilt – we get people into church and then re-traumatise them. We can stand in the way of people’s emotional healing.

“The Church would do well to think more about neurodiversity,” she adds. “People on the autistic spectrum are wired in the most spectacular way. They don’t need to be ‘healed’ – but they suffer a lot from trying to fit into a neurotypical world, and they need to know they’re loved and valued. There are lots of people in churches on the autistic spectrum, many undiagnosed. If we listen to them, they can teach us a huge amount. We don’t make use of their simple, honest and beautiful perspective on God.”

Olivia, 22, says: “I don’t like it when well-meaning people trying to empathise say, ‘Oh yes, I have problems with concentration,’ or ‘You don’t seem like you have AD(H)D’. Let me fidget – it’s a displacement activity that means I’m trying to focus. I’m not sick and I don’t need healing – I’m just wired differently.”

Talia, 15, says: “Sometimes people talk to me slowly, like I don’t understand. I’m not stupid. I’m anxious most of the day so I need people to be patient with me, reassure me and try to see the world from my point of view. Don’t try to reason my thoughts out with your thoughts – I don’t think like you. Also, I can be very literal so, for instance, don’t ask if you can ‘pick my brain’!”

Imogen, 11, says: “I find it hard when the room is noisy and smelly. I hear everything ten times louder than normal so I can get irritated, and if no one notices and I don’t get space, I can become overwhelmed. This is when my behaviour might not be so good. Please don’t judge me, I’m ‘auty’ not naughty!”

Nathan, seven, (with a little help from mum) says: “I like to know what’s going to happen each day – please prepare me for what’s about to happen. I need lots of reassurance that I’m OK and I’m doing well, and I need to know you like me. If I’ve done something wrong, don’t ask why I did it – most of the time, I don’t know. Instead, ask me what happened.”