A prisoner of faith 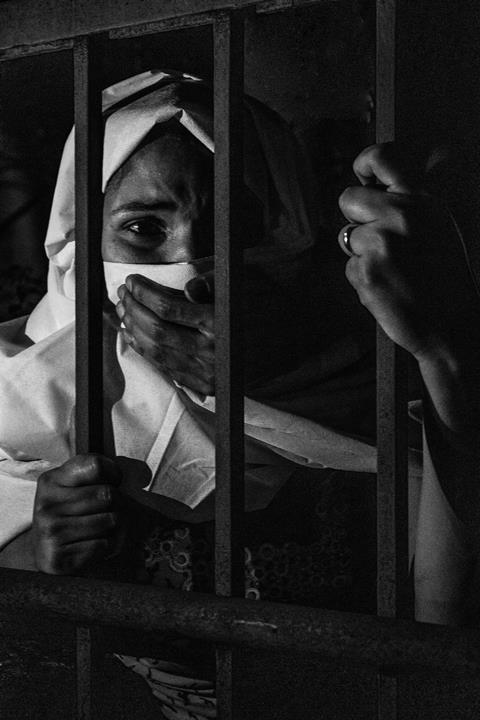 The coronavirus pandemic, and resulting weeks of lockdown, has had an impact on every aspect of life. And, while we are all in the same storm, we are not in the same boat. Though our circumstances and concerns may differ, we are all encouraged by Jesus to do the same thing: keep our eyes fixed on him rather than the storm.

Six years ago on 23 June, Meriam was charged with apostasy (leaving Islam) and sentenced to death. She was given three days to recant her faith in Jesus, but she refused. She was imprisoned with her son, Martin, and gave birth to her beautiful daughter, Maya, while in prison.

In a conversation with Christian Solidarity Worldwide (CSW), Meriam Ibrahim shares her experience.

You’ve been a Christian all your life, so how was it that you came to be charged with apostasy in 2014?

I was charged with adultery and apostasy for marrying a Christian man. I grew up with my mother, who was a Christian, but my father was a Muslim. So in the eyes of sharia law, I was supposed to be a Muslim. My marriage was seen as a wrongdoing; even though I was married in the church, under sharia law my marriage was invalid. That’s why I was given 100 lashes for adultery, and sentenced to death for apostasy.

I went to hospital for the medical exam before being taken to the prison and they found out I was pregnant! I wasn’t planning to have a child at that time, but it was gift from God. If I hadn’t been pregnant, I would have been executed the next day, but because I was pregnant, I was given two days to recant my faith.

The guard said to me: “Why don’t you just say whatever the judge needs you to say, and then you can just go?” There were so many people, including Christians, who told me to say whatever I needed to so that I could be released. But I knew that if I did that, my children would be taken from me because the courts didn’t recognise our marriage. They would have been taken and brought up as Muslims. I couldn’t do that. I wanted them to have the legacy of faith in Jesus.

What was going through your mind at that time?

The picture of Jesus on the cross. I thought to myself, it just can’t be as man wants it to be. I knew that God had something for me, and so I prayed: “If this is your will, let it be done in my life.” God chose me to go through this. It’s written we will face persecution and judgment from men, but, in the end, it’s all in God’s hands.

Your son Martin was only 18 months old at the time – how did he cope with the ordeal? And how did you cope?

It was really tough because I was worried for his safety. I couldn’t even sleep at night: I had to stay awake all night to watch over Martin. I knew God was doing that, but I had to do it too. Most people in the prison didn’t like me. Many of them threatened me; they threatened to jump on my stomach to kill the baby.

I didn’t teach Martin to talk while we were in prison, because I didn’t want him to learn the words that were being spoken in there. He was two when I was released but he couldn’t talk. As a mother I felt bad about that.

What have you learned about going through challenging times that might help others now?

We all go through challenging times – not necessarily going to prison, but we all face challenges and trials; sickness or we lose family members. Going to prison was terrible – I hadn’t even committed a crime! But I said to myself: “God put me here for a reason”, and every day I found I learned something new.

You don’t know what you will go through in this life, but you need to pay attention and focus on what God has for you; the purpose from your suffering.

I know God and I get to stand for that. So I knew that I if have to die in this moment, I will know that I left something for my children. They will know that we have faith, we have Jesus and we want that prize, and we have a freedom.

How did it feel being declared innocent and released from prison?

I had a feeling it would happen, but I was so shocked!

They didn’t tell me exactly that I was being released, but, when I left the cell, I had a feeling that I wasn’t going back. God promised me and I was so grateful for that. I wasn’t concerned what I would face tomorrow. It’s been a terrible experience but joyful at the same time, because I felt God’s presence in every moment of my life.

You were part of a group of survivors of religious freedom violations who met President Trump in the White House last year. How are you using your experiences to speak for others who are still suffering?

I’m grateful for that opportunity, and for every opportunity I have to speak up for those people and to be an advocate for others. I witnessed too many injustices to be able to stay silent. When our leaders go to places like the United Nations and paint a picture of what is happening in Sudan, saying our country is good, it’s about politics.

So when I or other survivors go there and share our stories and experiences, it shows the truth of what is really happening in my country. And that shows people exactly what needs to be done.

So pray for me to continue the work God has put in my path, and for safety for me and my children. I’m not afraid, but I know that the evil exists, so pray for me.

CSW is a human rights organisation specialising in freedom of religion or belief. The organisation works on over 20 countries across Asia, Africa, the Middle East and Latin America.

Photo by Felipe Vallin from Pexels