A Romeo and Juliet love story

Ram and Sunita Gidoomal are from different castes (class systems), which meant those around them felt their relationship simply couldn’t work. They proved everyone wrong 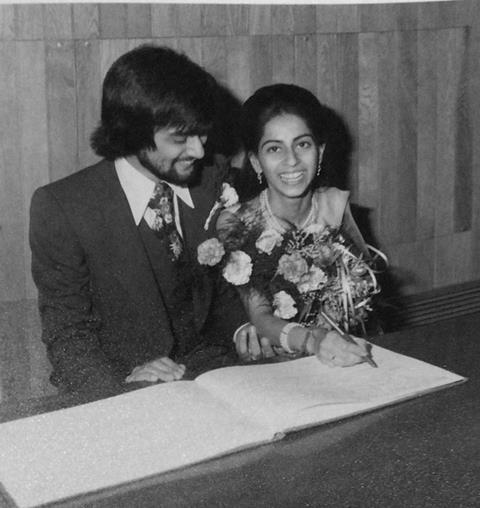 Sunita and Ram signing the registry

It’s spring 1975. On the platform of Shepherd’s Bush tube station, a young Indian couple are stealing time together. Down two creaky escalators, surrounded by travellers, they feel safe from the all-seeing eyes and meandering grapevines of their communities.

Ram and Sunita Gidoomal first met at a Diwali event in November 1974 when they got chatting over a misplaced handbag. Some days later, Ram came up with a pretext to see her again.

“Sunita was studying at l’Institut Français, just up the road from Imperial where I was doing my PhD. I called to ask if she would put up posters for an event, then said: ‘I must buy you lunch to say thank you.’”

It was considered a perfectly acceptable ‘business lunch’. Even Sunita didn’t suspect a thing. “But that day we talked non-stop,” she remembers. “We had so much common ground. It felt like I’d known him all my life.”

The couple began to meet discreetly, but while Sunita was in India for a family wedding, a huge bouquet of red roses arrived. “Everyone thought they were for my cousin, the bride. Imagine their expressions when they realised they were for me, and from this young man they’d assumed was just a friend!” Whispers spread like wildfire, but Sunita wasn’t worried.

“I assumed it would be fine. My father and Ram had hit it off immediately when they’d met before, so it was a huge shock when Dad said I couldn’t be with him. I hadn’t given the caste difference a second thought.”

Sunita was born in London, raised in the professional Amil caste and educated at the Legat Ballet School. Her parents were open-minded but didn’t think she should settle with a Bhaiband – the community where it was traditional to leave school at 16 to join the family business.

Ram admits their backgrounds were different. “My family were twice migrants – they fled their Indian palace dur ing the Partition to rebuild a wealthy life in Kenya, where I grew up. When we were deported in 1967, 15 of us crammed into the flat above our Shepherd’s Bush corner shop. Meanwhile, Sunita was living on Bishop’s Avenue when we met.”

Sunita’s parents weren’t prejudiced. “They didn’t look down on Ram’s caste – Dad had Bhaiband friends – they simply considered the traditions too different. They said it couldn’t possibly work. So I asked: ‘Who is there from the Amil caste?’ Mum frantically went through the possible suitors but there was nobody

‘I could see you didn’t have to be perfect. You could have struggles and still be a Christian’

”I assumed it would be fine. My father and Ram had hit it off immediately when they’d met before, so it was a huge shock when Dad said I couldn’t be with him.

“I couldn’t imagine being without him. I think we lasted about 24 hours!” she laughs.

Studying near one another, clandestine lunches and tube platform meetings were easy. Sunita recalls: “Eventually my parents found out and, to our relief, gave in. They agreed we could get engaged once I’d finished my studies.” 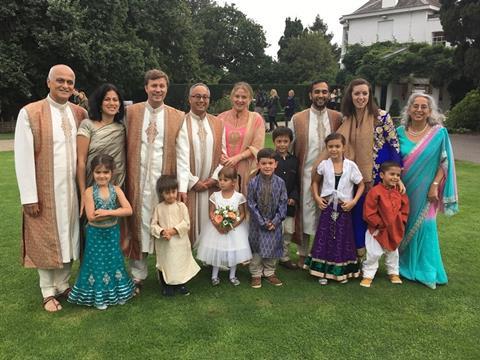 As if there weren’t enough differences, Ram had become a Christian. So while Sunita’s family worried about lifestyle, Ram’s Christian friends told him he shouldn’t be “mismatched with a non-believer”.

“Normally I’d agree,” Ram says: “But Sunita knew the Bible better than I did!”

“Although culturally we were Hindus, with RE and compulsory chapel at boarding school, I knew the Bible,” Sunita explains. “I said I’d go to church with Ram once we were married. I knew enough about ‘honouring my father and mother’ not to attempt it while under their roof!”

“Although Ram was a Christian, we chose a registry office wedding and traditional Indian celebrations to avoid making our families uncomfortable.”

“To be honest,” Ram admits, “I still struggled to understand Christian traditions myself.”

Once married, they attended a Baptist church near their Ealing home. Together they muddled through services – Ram handing Sunita his Bible to find the page. While Ram had heart knowledge, Sunita had the head knowledge.

“The church was welcoming, but we felt like outsiders. However, just before we moved to Geneva for Ram’s work, Eddie and Barbara Askew invited us for lunch. Having worked as missionaries, they understood. Sadly, our imminent move meant we couldn’t deepen that friendship.”

“But that move to Geneva changed everything.” Sunita continues. “A couple called Douglas and Rosemary Marr took us under their wing. Rosemary took me to various groups. She was always open about her own difficulties – it was as much her weaknesses as her strengths that drew me. I could see you didn’t have to be perfect. You could have struggles and still be a Christian. When we studied Colossians, I suddenly realised being a Christian could make a difference to how you lived. I wanted this but didn’t feel part of it. Rosemary said: ‘All you have to do is ask Jesus in.’

“Back home, Ram and I talked into the night and I asked Jesus to become part of my life. Every morning since, Ram and I have prayed together. That prayer has carried us through the big decisions of life and parenthood (God blessed us with three wonderful children in Geneva). Years later, living back in England, Ram returned from a business trip to India devastated by the poverty he’d seen. Again, it was this prayer which helped us change direction.” 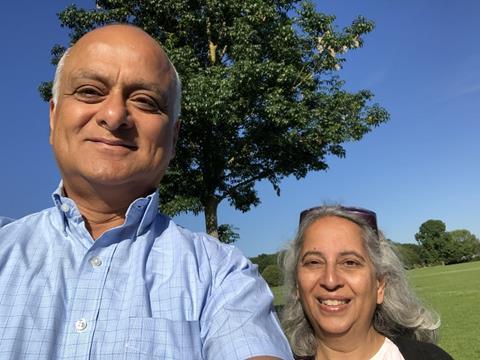 Ram gave up his lucrative career in finance, dedicating himself instead to Christian philanthropic work. In 1989, with a handful of friends, Ram and Sunita set up the charity South Asian Concern (SAC) to support South Asians both in the UK and in their homelands. One significant project was being the business brains behind the ‘Christmas Cracker’ campaign in the 80s and 90s (pop-up restaurants, radio stations and newspapers run by church youth groups nationwide).

Later they were involved in a GMTV Mr Motivator campaign to build a hospital in an earthquake-stricken part of India. Sunita’s gift for administration quickly became apparent as she noticed ways of working more effectively. Thanks to this campaign, the GMTV Priya Hospital was built.

When Ram ran for mayor of London in 2000 and 2004, Sunita again supported him and, when others complimented her gift for financial administration, she took further training and has worked as the charity’s treasurer ever since. SAC’s work is still going strong, recently raising £230,000 for Indian hospitals to fund ventillators during the peak of the pandemic. Although Sunita talks of slowing down, it is clear her ongoing contribution is still significant. However, she and Ram have also found time to enjoy the good things of life together.

“Between the last child leaving for university and the first grandchild being born, you have a kind of second honeymoon, travelling and exploring together. Now it’s another season, with the joy of seven grandchildren. Looking back, we are so grateful to God for everything. When you’re young, everything is very intense. We’re in the fun bit now.”

You can read more of Sunita and Ram’s story in Ram’s forthcoming autobiography: My Silk Road – Stories of a British Asian Refugee, which will be published by Pippa Rann Books and Media this summer to mark the 75th anniversary of Indian Independence.