I’m a Christian who gets botox, I believe God gave me beauty and I want to maintain it

Actress Suzie Kennedy has had botox since her late 30s and has always felt uncomfortable discussing it with fellow Christians. Here she explains why she chose to have the injections and the doors that her appearance have opened up for her to talk about Jesus. 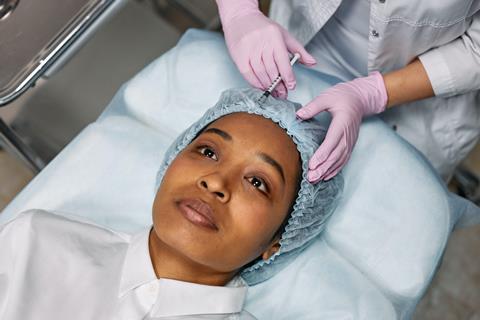 As I write this, I have just put some Arnica cream on the side of my eye as it is currently sporting a black bruise that looks like I was hit by a tennis ball while playing in the park. If anyone asks what happened to me I may tell them the park story anyway, because telling someone that you just had Botox can come with a feeling of shame. Especially if you are a Christian.

How many times to do we hear from the pulpit that Jesus loves us just as we are and that the Lord sees our heart. Peter 1 3:3 tells us: “Do not let your adorning be external.” However, with the cosmetic surgery industry worth nearly sixty billion dollars worldwide it’s safe to assume that more people than ever are resorting to a nip or tuck.

Being an actress who is mostly known for playing Marilyn Monroe I have felt the pressure of living up to a Hollywood style of beauty. I have also felt the pressure of holding back the ageing process in public. How many times have I turned the magazine pages and seen actresses like Jennifer Lopez applauded for not looking their age? Just those articles alone tell a woman that it’s an achievement to not succumb to the natural ageing process.

Most women I know do not have the budgets of Hollywood stars but with the rise of surgery being more affordable and accessible botox has become the go to for the girl next door. I started with Botox in my late thirties. I was open about it to my female friends who commented that I did not need botox as I never had any wrinkles. I explained that that was because of the Botox. I also would share with them who did it, and how not to overdo it.

Talking so openly to Christians about my botox never felt as comfortable. I always felt that I was not being true to how God made me.

However, talking so openly to Christians about my botox never felt as comfortable. I always felt that I was not being true to how God made me. There is no one in my church or Christian university that has ever told me they have had any cosmetic surgery. Am I a bad Christian? Because that is how it felt. Am I not obeying the scripture that tells me that I need to work more on my heart than my outwardly appearance?

It was when I took a step back, I realised how what I look like is a vessel for God. Due to how I look doors have been opened to places that needed to hear about Jesus. I have been invited to places that never knew my heart or personality they only saw the outward appearance. While there I would talk about Jesus to people that would never be having these conversations.

When we see a beautiful building or piece of art, we raise funds to maintain its appearance. We don’t allow it to fall into disrepair and just shrug and say it is old so we should allow it to crumble. This is especially true when something is needed in the community like a church. You may be reading this and thinking, is she comparing herself to a church? Well, in a way, I am. Our bodies are where we dwell and Jesus dwells with us. We are told to look after them, eat well, exercise as a healthy body is a healthy mind.

The story of Esther shows us how powerful beauty can be. Beauty is a gift from God. Is it wrong to try to maintain this gift?

The ageing process will naturally take its toll on everything, but if there is a way of maintaining something should we be ashamed of it? The story of Esther shows us how powerful beauty can be. Beauty is a gift from God. Is it wrong to try to maintain this gift? Joyce Meyer the evangelical preacher was criticised for succumbing to surgery. When questioned why she felt the need to have surgery she said: “So many people have the attitude that if you’re a Christian you’ve got to dress bad, not do anything to your hair, have nothing. It’s no wonder that Christianity is not very attractive. I mean, how many people do you know in a Western culture that’s going to go, ‘Yeah, give me some of that’?”

It can be argued that we should not follow cultural norms to bring people to faith. I counter argue that with the fact that to me beauty is a gift from God. He wants us to preserve those gifts and use them to spread the word of his kingdom, even if that means a little botox now and again.