Bible Study on Lent: Jesus’ example in the wilderness 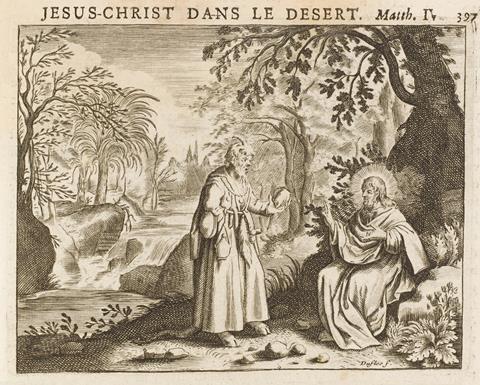 I wonder if you are giving up something for Lent? Every year at this time people across the country make symbolic acts of self-discipline. This year, I’ve heard from friends who are observing Lent by taking time off computer games, giving Facebook a miss or not drinking any alcohol. I know some of them will see their commitment through the whole 40 days, but I’ve got a strong feeling that others might not!

Not everybody who makes this gesture will know its real origin, however. With so much of our culture now secularised, most people don’t link the 40 days of Lent with the time Jesus spent in the wilderness. Even churches don’t remind us of it as they used to years ago.

The 40 days Jesus was in the wilderness were a time of intense self-denial. Christian tradition has located the wilderness as the rocky inhospitable area between Jerusalem and Jericho (the same area Christ’s parable of the Good Samaritan is set in – see Luke 10:25-37). Jesus’ own experience in the wilderness probably stayed with him throughout his ministry.

During those weeks of fasting, Jesus denied himself food and struggled with gnawing hunger. He denied himself companionship and support and faced isolation. He denied himself any external distractions and remained entirely dependent on the spiritual and emotional resources from within. Not surprisingly, few of our own Lenten programmes get anywhere near the demanding self-denial of Jesus.

However, when we read the account of Jesus in the wilderness in Matthew 4, we discover that self-denial is not actually the main thrust of the story. Although Jesus’ fasting is very significant, it’s mentioned only in the first few verses and the Gospel moves quickly on to what happened next. The focus becomes much more on the temptations Jesus faced. Matthew describes how Satan went to Jesus at his weakest moments to put three temptations before him, often characterised as being physical, emotional and spiritual. At a more profound level, however, Satan’s tempting was aimed at the very heart of Christ’s identity and mission on earth.

A closer look at the temptations

The first temptation may sound innocuous enough. Jesus was hungry. There was no food anywhere in the desert, but there were plenty of rocks and stones. Jesus is God’s Son, a miracle worker; in his ministry he went on to feed 5,000 people with a few fish and loaves. So the devil artlessly suggested that since Jesus is the Son of God, he should exercise divine authority over the stones and turn them into bread. This simple act would have meant he no longer suffered pangs of hunger; what could have been more harmless than that? Yet Jesus knew it was not a simple, harmless act. It would have meant turning his back on self-discipline and intimacy with God to give in to his craving. Even more, it would have meant accepting that he needed to demonstrate his power to the devil. So he rejected the challenge and instead referred Satan back to God’s revelation (from Deuteronomy 8:3) that: “Man shall not live on bread alone, but on every word that comes from the mouth of God.” Jesus’ food in the wilderness was to be found in God’s word alone.

The second temptation was more dramatic. Once again, it was a challenge to exercise divine authority, but this time by calling on angelic forces. The devil himself even quoted scripture. He took Jesus to the very pinnacle of the temple at Jerusalem, cited Psalm 91:11-12 to him, and dared him to hurl himself off the pinnacle, so that God would send the angels to prevent his fall. The temptation had an emotional thrust: to test God’s love, in a theatrical way. Satan was tempting Jesus to ostentation, fanaticism, display, rather than quiet obedience. Jesus rejected it, putting the devil’s interpretation against a quote from Deuteronomy 6:16: “It is also written: ‘Do not put the Lord your God to the test.’”

In the third temptation the devil seemed to lose all subtlety. Taking Jesus to the top of a high mountain, he offered him all the kingdoms of the world and their magnificence. Only one thing was asked of Jesus in return, that he worship Satan. This offer of Satan’s reveals so much about the conflict Jesus faced. Kingdom dominion already belonged to him as the Messiah, but came through his suffering and pain. He already had the power to forgive sins, but this was validated by his death on the cross.

Jesus was in the wilderness precisely to prepare himself for the journey of sacrifice he had to make. But in this third temptation, Satan was offering him a short cut. Jesus knew that he was being offered a very different kingly power. It was the sinister power that comes from being in alliance with the prince of this world. It was a power to wage war, to oppress the vulnerable, to distort truth, to bring in the reign of violence and hatred. That sort of power is all Satan can give. It is the power of idolatry that undermines God’s righteous kingdom of love, joy and peace. So Jesus swiftly countered this temptation with the biblical commandment that we worship and serve God alone, and sent the devil away.

When the angels arrived to minister to Jesus after the temptations ended, they must have brought huge reassurance after such a traumatic encounter. But throughout his whole ministry, Jesus faced a life-and-death struggle with the powers of darkness.

How do we face temptation today?

Jesus knew well the source of his temptations and that they came from the devil. In our culture today, little attention is paid to Satan, or to any idea that there is a power of evil actively at work in our midst. We are quick to blame individuals but slow to understand how wrongdoing can worm its way into the hearts of nations and societies to affect their very structures and thinking. The devil is active today in the kingdoms of this world, as well as in our personal lives.

Lent offers us an opportunity for spiritual stock-taking. We can identify those areas of our own lives where we are tempted to idolatry: to worshipping something or someone else in God’s place. We can reflect on the values that are most important to us, and what we hold closest in our hearts. We might want to do this practically, noting down each day the times when we have experienced God’s special blessings, and also when we gave in to temptation. We could reflect on our relationships with other people; what we can do better to help them in their needs and encourage them in their faith. Then, in times of prayer we can ask God to show us where we need to change and ask for the power to live more faithfully as his servants.

Each night we can accept God’s forgiveness for our failings of the day and receive his love for the next day. If we make these 40 days a period of more intentional discipleship, we might find greater joy and power in our lives.

Lent comes each year to remind us to take sin seriously, and to recognise the power that evil can wield in every area of life. For Satan is always ready to offer his might to those who are willing to bow the knee and worship him. Lent provides us with a dedicated time in which when we can pray more fervently, for ourselves and for the world. We can pray knowing that Jesus has overcome evil, and that his power can reach the darkest places to bring victory.