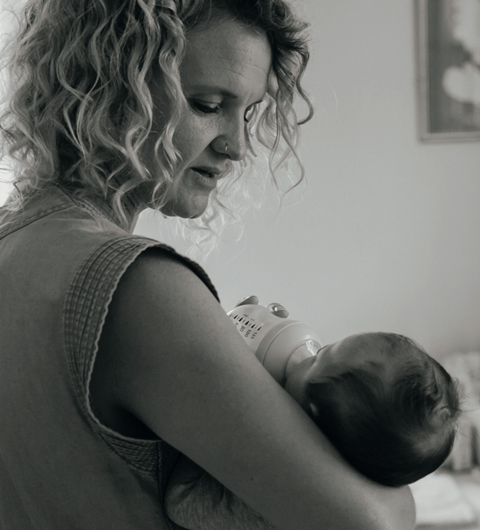 The word ‘doula’ comes from the Ancient Greek doulos, which means female servant. A doula is present at a birth to provide emotional, physical and informational support to mothers during labour and delivery, as well as post-partum. A doula isn’t medical; we work from the hips up, as an extra pair of hands, the mother’s biggest cheerleader and someone who can advocate for her too.

I became a doula in 2016, but my love for babies started many years earlier. My little brother was born when I was 19 months old. I was so smitten with him and called him “my baby”. When I was three years old, my father passed away from cancer, so mum purchased a house with a single-mum friend of hers. Together, they raised us all in Cape Town. Mum was an inspirational pioneer when it came to loving wholeheartedly and creating family beyond the bond of blood.

I always knew I would work with babies in some capacity. Despite wanting to be a midwife throughout high school, I found myself teaching in the UK post- graduation. In 2006, God spoke through the prayers of two ladies, showing me that I would be a missionary to people groups that had never known the power of God.

A doula isn’t medical; we work from the hips up

Then, in 2009, I packed my bags and set off to do the Youth with a Mission (YWAM) Discipleship Training School in Hawaii to train for a life of overseas mission. While leading a team in Phnom Penh, Cambodia in 2010, I met a young mum and baby who I spent time with and helped. It was a significant moment for my God- given mother’s heart to expand.

A year later, while in India, my team was building homes for widows when I found myself caring for a baby once again. Everyone called me Mumma Sue and the name has stuck!

I moved with YWAM to Northern Ireland in 2012, and explored training to be a midwife, but the course entailed initial nurse training, so I declined. By that time, I was nicknamed ‘the baby whisperer’ when I volunteered at a ‘mums and tots’ group as the only non-parent.

It was in Nepal in 2013, during a worship and intercession time, that God powerfully got my attention as I had a physical and visceral response to the spiritual. When I heard about the shockingly high maternal death rate in the remote villages of Nepal (five hours drive away from any hospital) I completely broke down, weeping and shaking. I knew I had to be part of the solution for life for both mums and babies.

I was now sure of my call but I also bore its weight. Then, along with my whole team, I left Nepal unwell with a parasite. However, while others got better, I found myself back in Northern Ireland as a shadow of my former self, constantly exhausted and anxious.

I’m such an outgoing and positive person, and I couldn’t understand why my brain fog wouldn’t clear. When a visitor from Mercy Ships shared her testimony, she described her symptoms of chronic fatigue syndrome. I just sat thinking: “This is me!” I’m so thankful to the Holy Spirit for bringing her. She talked about how we aren’t very good at loving and caring for ourselves as Christians.

After being diagnosed with chronic fatigue, I headed back home to Cape Town in April 2014 to spend time resting and recovering.

During this season, I volunteered at the local maternity ward, where I cared for the special care babies with ‘kangaroo care’. This means holding babies skin-to-skin for extended periods (each baby, just in a nappy, is held upright against a carer’s bare chest with a blanket covering them). Skin-to-skin contact helps babies thrive, as it stabilises their heart rate and improves breathing and oxygen levels.

One day the neonatal intensive care unit asked me to give kangaroo care to a premature baby girl whose mother had passed away. As I held that tiny baby girl on my chest, I spent hours praying for her. As she slept and received ‘mummy’s love’, I knew this was what I was made for.

By the following year I was working as a special educational needs (SEN) facilitator in Cape Town. I had another flare- up of chronic fatigue, so knew it was time to move on. In the staff room of the SEN unit, a colleague asked me: “Have you ever thought about being a doula?”

Not long after, a friend invited me to home-school her children on a ranch in Oklahoma. I went, and started exploring doula training. I searched online for doula courses in the area and found a week-long doula course in Alaska on the YWAM website, which was perfect for my budget and my schedule. God directs our paths; he’s so kind. I had three births to attend within a month of qualifying as a doula!

My first client was my friend in Oklahoma as she gave birth to her third baby. Then I served a friend as a doula in California with her second baby. It was such a redemptive birth; a healing birth story after a very traumatic first birth. She had far less pain and no tearing during labour. Joy filled the room when the baby came!

I then helped a friend give birth in Surrey, and worked as a night nurse to triplets in Ireland before heading back to Cape Town. Today, I volunteer as a doula at the labour ward at the local maternity hospital and continue to provide kangaroo care as a ‘kanga mum’.

I have been a doula for many mothers who are giving birth alone, which intensified during COVID. No one was allowed into the labour ward, except us doulas. A mother would have been labouring on her own without us.

Doulas are there to love the mum, to let her know she can do it, and that she will see her baby soon. The Holy Spirit guides me in what to say, speaking truth over the mother and praying for the baby. I have also become a bereavement doula for mothers who suffer miscarriages or stillborn babies. I have had incredible ‘God moments’ being able to draw alongside those who have had miscarriages or stillbirths. Weeping with those who are weeping, as we are told to do (Romans 12:15).

By imparting the love of God to minute-old tiny souls and walking with others through the shadow of loss, I feel like I am being a representation of the mother heart of God.

I have just started a business called ‘Doula Mama’ with some friends. As a team of two midwives, a doula and a mother, we offer various care packages for expectant mothers. Our vision is to empower mothers so that they know their birth choices and experience birth as God intended.

I am trusting God for a husband and my own children one day, but I will continue to pour out God’s love to mothers and babies as a doula. Jesus came as a servant, and it is a wonderful privilege to serve pregnant and labouring mothers in this way.