Writer Lauren Windle, explains why the latest fad ‘Wordle’ is so much more than just a brainteaser, but a wholesome connector of people. 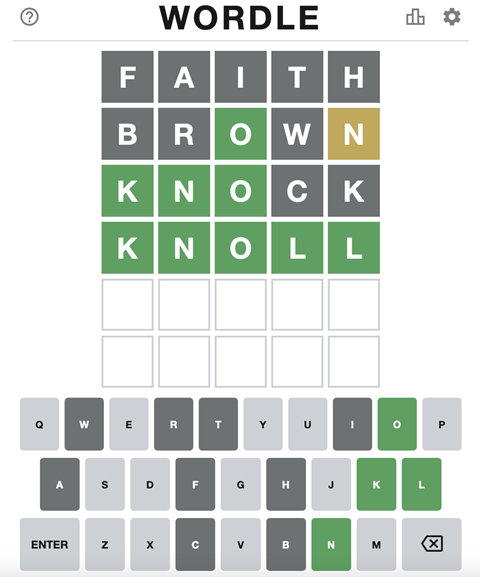 Who remembers when Sudoku blew up and everyone was doing it? I would sit on the train on my way back from college racing to finish before my stop. Yep – I was that cool. Since then, the digital age has taken over puzzle fads and evolved them into something sociable.

Did you get involved in the Draw Something craze? It was basically Pictionary on your phone, but people went so wild for it that shops started selling little digital pencils to facilitate your designs. Then there was Words With Friends (aka digital Scrabble) that rumbled on as a low-impact connector of people during the pandemic, when some people were too burned out for an actual phone call.

Gaming has its flaws, not least the fact that it’s now a medically recognised addiction after young people were dying in front of their screens because they didn’t move away from their game. But this isn’t that… it’s far more gentle and far more fruitful than that.

In line with the resurgence of ‘brain training’ teasers, Wordle is the latest fad to sweep WhatsApp groups up and down the country. If you haven’t heard of it, here’s the lowdown; you have to guess a five-letter word. You have six attempts and no initial clues. So you have to start by picking a random five letter word and inputting it for feedback. Once you’ve put a word in, each letter will turn a different colour; grey means that letter doesn’t feature in the word, yellow means it does but not in that position and green means you’ve got both the letter and position correct. From then you’ve got to use your wits and logic to sniff out the target word. There’s only one puzzle a day so you can’t waste too much time playing it and everyone in the world has the same word for that day.

Not because I’m a weirdo who used to do Sudoku on the train (although that is valid) but because it has connected me with so many friends. The day that a word had the American spelling, my British-English speaking friends were united in collective uproar. When one person got the word in two guesses we celebrated with a flurry of gifs and messages of congratulations. When I lost the game one day because the makers chose the word ‘proxy’ throwing an unexpected and statistically unlikely ‘x’ into the mix, my friends commiserated with me and encouraged me to keep going. It’s a microcosm of the community we’re supposed to experience daily, and it was brought to me through Wordle.

It’s the light touch way to start conversation with and for people who find it hard.

God loves community and connection, but for some of us it’s hard. We feel lonely, we feel disconnected, we don’t like or want to make small talk, we feel isolated. Anything as wholesome and unifying as Wordle, has my vote. Send it over to friends and ask if they’re playing, then start comparing notes on your success (and occasional failures in my case). It’s the light touch way to start conversation with and for people who find it hard. In some cases, it could be a jump off point for more difficult chats. Or it could just be a fun daily challenge to get your cogs turning, either way – it’s win-win.

You can play Wordle here.