The shepherds would have been dismissed as unreliable witnesses

Uncouth, unclean and tattily dressed, the shepards would have been the last people you’d want to vouch for you, and yet Jesus revealed himself to them first. Rosemary Hector reflects on the radical nature of the way Jesus came to earth.

I love clothes. Friends tease me that I need to see some films twice – the first time for the frocks, the second for the story. But sometimes there’s something to be learned from the way people are dressed and the Christmas story is no different. 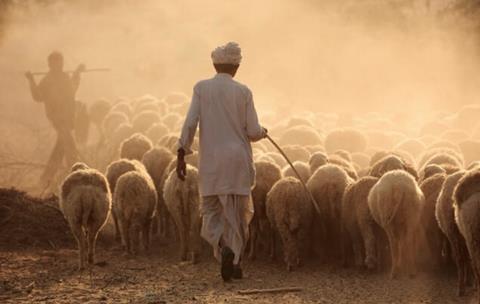 Their clothes gave them away

When Jesus was born, one group of people to whom the news was told was rather unexpected; shepherds. They were instantly recognisable by their clothes. They stayed on the hills for weeks at a time, leading their scrawny sheep to find grazing and water. The conditions were grim – hot and dusty during the day, cloudless and bitterly cold at night. In this treeless landscape, there was no shelter other than enclosures they might have shared with their sheep, or a cave.

They wore loose garments made of a rough weave, giving protection from the burning sun and some warmth at night. A covering, or keffiyeh, protected their faces and heads. They were not well off. Nobody else looked like them.

In that society, people did not change their image by wearing something different. Appearances were consistent and instantly gave away occupation and status.

It wasn’t just the roughness of their wraps and sandals, if they wore them. They probably smelled. Illiterate, rough and unwashed, they would have been avoided by others who considered themselves further up the social ladder, with more choice, more money, better food, nicer and cleaner clothes. In a court, or formal setting, shepherds would not have inspired confidence, and would have been dismissed as unreliable witnesses.

Illiterate, rough and unwashed, they would have been avoided by others who considered themselves further up the social ladder.

Yet, this bunch, shivering out on the hills, were among the first to hear the good news. Anticipating their terror, an angel appeared first, telling them not to be afraid. The message was that they would find a baby; Christ the Lord. The news of this baby, who would save people, and who would be found in Bethlehem, wrapped only in cloths, was followed by more angels. Terrified yet inspired by this blast of sight and sound they rushed off to search.

These awkward, uncouth men, probably more comfortable caring for animals than interacting with people, were singled out. It was left to them to communicate the story. And the baby? The baby’s appearance was also unexpected. No silk-edged precious shawl for him! Little wonder many struggled with belief. This was not how a king of Israel or witnesses to his birth should be presented! It was all so downbeat, ordinary and lacking in style. And the risk! There was no control over how these unsophisticated chaps would blab the story – probably to equally insignificant people they met in the inn.

Next time you see a nativity play, with a group of youngsters each wearing a striped tea cloth on their head, or you stare at your wardrobe wondering what to wear, remember how deeply radical the Christmas story is. Christians believe that God came to be with us all. He chose to communicate first with people who had little control over their circumstances, how they presented themselves or how they looked.