Writer Andy Kind is the father to two young girls, here he explains what he hopes to teach his daughters as they venture into the world. 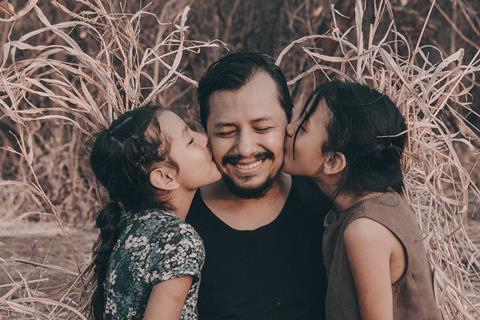 For Father’s Day this year, I’m giving my two daughters a model. Not an airfix model or Lego; I’m not giving them something they can make, but rather something that has been forged over time and continues to be hammered into some kind of shape: a daddy who’s trying to live out the Gospel of grace and reconciliation in the long churning wake of divorce. This gift isn’t new or shiny, nor something you can buy in the shops; it’s battered and tattered and second-hand. Growing in grace is costly, but as far as hand-me-downs go it’s a priceless heirloom. And sometimes it’s all we have to offer.

There are lots of things I want my daughters to know - modern-day proverbs, if you like, of which they should be aware. For example; “The fool says in his heart: ‘I’ll probably be fine with just one Jaffa Cake’”, or “Verily, tis easier for a camel to pass through the eye of a needle than to ask directions to a hospital ward without sounding like an assassin”. Sage wisdom, I’m sure you’ll agree. But life isn’t a ramshackle parade of inspirational memes, hung across our lives like garish bunting. Phrases such as “Jesus wants you to be happy” and “God’s got something new/someone better for you” are just secular slogans sieved over with Christian icing sugar. It’s not that God craves our unhappiness, obviously; but there’s a deeper, richer narrative sewn into the cosmos than that of self-actualisation.

I want my girls to know that brokenness doesn’t have to win; that pain, pride and self-preservation don’t get the casting vote.

The reason so much of our culture’s obsession with self-gratification rings so hollow, the reason it fails ultimately to bring life, is that it doesn’t acknowledge death. The Christian story both looks death in the face, and then sees past it to resurrection.

I write stories for a living, and one thing that I’ve learned about stories is that you never write anything off as a lost cause. You always keep the germ of the idea safe, tucked away in a draw, redeemable. I want my girls to know that brokenness doesn’t have to win; that pain, pride and self-preservation don’t get the casting vote. Not everything that dies can be resurrected, of course: when Jesus called Lazarus back from the dead he left all the other grave-dwellers unbeckoned. But not everything that dies has to stay dead.

God’s primary aim is not in making new things but in making things new. The joy of the prodigal son is not that he found happiness somewhere over the rainbow, but that he came home. Nehemiah returned to Jerusalem to rebuild the wall, not simply to seek out fresh real estate. More often than we recognise, new life and victory are found not in charging forward, but in carefully going back. We have a God who understands our suffering - and who suffers with us. The downside to this is that God isn’t afraid to let us take wounds to our heart and our pride - but only because He knows just how to heal those wounds. He went first.

More often than we recognise, new life and victory are found not in charging forward, but in carefully going back.

In 2 Corinthinians, Paul tells us that we’ve been given a ministry of reconciliation. That’s huge! It means that our mandate is to rebuild and restore even as things are continuing to fall apart around us. Of course I want my girls to be happy: I want them to laugh far more than they cry. But I want them to see in me someone who really doesn’t believe that death and all its minions (bitterness, rejection, caricature) get to win. And that, sometimes, the reason God heals our wounds is so we can go back round that last bend and find the person who wounded us…and hang redemption across our lives like garish bunting.

What do I want from my girls in return? A few packets of Jaffa Cakes wouldn’t go amiss.