Learning from my Muslim friends

Rachel Pieh Jones has lived among Muslims in both Somaliland and Djibouti. Here she tells Jemimah Wright how much they have taught her about faith 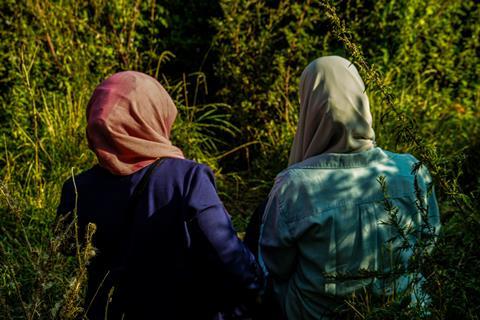 Rachel’s recently published book Pillars: How Muslim friends led me closer to Jesus (Plough) is her story of what she has learned about her own Christian faith from her Muslim friends and neighbours over the years. She discovered that Jesus now looks, acts and talks more like the people around her. In contrast to the midwestern evangelical Jesus she packed to take to Somalia, this Jesus is Jewish and Palestinian.

Every day I saw Muslims who sincerely loved their religion, and I didn’t know how to deal with them

Rachel used to picture Jesus with blond hair and a midsummer tan. “Now Jesus appears in my mind in a red-and-white turban and goatskin sandals, with a beard he could measure against a Talib’s,” she says. “He has a shepherd’s staff across his shoulders. Not the smoothly curved oak staff he is pictured with in Western children’s Bibles, but a warped staff with a knobby tip like an old woman’s gnarled knuckles. His feet are dusty, his eyes are brown, he doesn’t speak English. When he says God, it comes out in Aramaic as el-Lah. It sounds like Allah.

“Although some of these practices are understood differently, or ignored, by my evangelical branch of Christianity, they are an integral part of my religion’s foundation. The journey that took me to Africa led back to this heritage through newfound curiosity about my own spiritual roots, global and historic.”

Rachel first began studying Islam after she married Tom. “We moved into a one-bedroom apartment in Minneapolis on the 22nd floor of Riverside Plaza, a sprawling apartment complex, also known as Little Mogadishu. Residents were refugees from whichever region in the world was currently in crisis.”

“I believed that only Christians could be at peace or enjoy intimacy with God, that the Bible was the only true lens through which to see the world, and that my evangelical practices were the only ones leading to vibrant spirituality. But every day I saw Muslims who sincerely loved their religion, and I didn’t know how to deal with them. 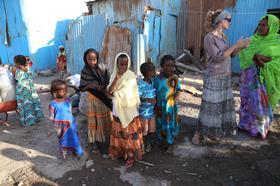 Rachel talking with her friend about a small business idea, in the Balbala neighbourhood.

“What did Christianity have to offer that they didn’t already enjoy? At that time, I would have replied with the evergreen Sunday school answer: ‘Jesus.’ I didn’t know that though we understood Jesus differently, the Muslims I stared at revered him as a prophet, or that the Quran said more about Jesus than it did about Muhammad. I didn’t know the story in the Quran that says Jesus scooped up a handful of clay, formed it into a bird, and blew on it until the clay bird came to life.

“I like what that story says about Jesus – and because of what it reveals about how Muslims picture him. A life-breathing Jesus with creative power, a gentle touch and joy. I see him taking something dirty and making it sing.”

In Riverside Plaza, Rachel volunteered to tutor a Somali refugee family in English. “Sometimes when I arrived their mother, Ubah asked me to wait while she prayed in the corner. I wanted to ask her about prayer – what the Arabic words meant, why she faced a certain direction, how she’d learned the movements, how she felt when she finished. But her English barely improved, and her children got bored of translating.

“When the month of Ramadan began, and Ubah continued to press a cup of shaah into my hands but refused all food and drink herself until sundown, I wanted to ask – but couldn’t –why she broke each day’s fast with watermelon and dates and why she mumbled Bismillah al-rahman al-rahim before eating. 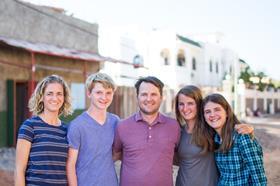 Rachel and her family in Djibouti; The International School of Djibouti is in the background.

“I started to read the Quran on my own but found the archaic, poetic English difficult to understand. Church friends were little help. Some warned me to stay away from the Quran. The harshest said it was a satanic book, that Muhammad’s revelations had come via possession. The Sunday after September 11, 2001, a man cornered me at church and quoted Quranic verses, out of context, condoning violence. I had already received most of those quotes in mass emails filled with capital letters and exclamation points and references to slaughtering infidels.”

While we disagree on concepts of God and in our convictions about things like sin, forgiveness and the process of redemption, we are people of faith

Tom was finishing his master’s degree, and he and Rachel began to consider employment opportunities across the globe: Turkey, Kazakhstan, Pakistan, Indonesia, Uzbekistan, Western China. The dominant religion in each location was Islam. They settled on Somaliland and Rachel continued to study the faith of the people. She read through the Quran in three languages.

“Some of what I learned surprised me. For instance, the Quran refers to Jesus as the word of God, Christians – known in the Quran as ‘people of the book’ – are considered close to God, and Muslims are encouraged to discuss faith with Christians.”

We don’t agree on all God’s characteristics, but we do agree on many

When the family first moved to Somaliland, things did not go to plan.

“My family’s ten months in Somaliland ended with three bullets and a phone call.” On 21 October 2003 a British couple, Richard and Enid Eyeington, who had worked at the SOS Sheikh Secondary School for just over a year, were murdered in their homes.

Rachel and her family were given two hours to flee the country and get on a flight to Addis Ababa, Ethiopia. After three months, and a stay in Kenya where they had trauma counselling, the Jones family moved to Djibouti.

Tom worked for almost a decade as a professor at the University of Djibouti, just across the border from Somaliland. He earned his PhD in Education Development from the University of Minnesota and staff in the Djiboutian Ministry of Education and the president’s office eventually asked him to develop an English-language school. Rachel has a degree in Linguistics; they both now work at the school. 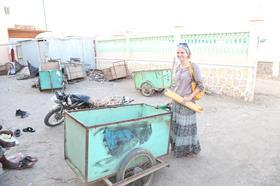 “When people ask if I am Muslim, I say no. When they press and ask if I would like to become a Muslim, I say: ‘No, I love Jesus. I could never abandon someone who gave his life for me.’ I’m not ashamed of my beliefs that run counter to those of the people around me. Yet while we disagree on concepts of God and in our convictions about things like sin, forgiveness and the process of redemption, we are people of faith. We can communicate.”

As Rachel and her neighbours in Somaliland and then in Djibouti began to accept and respect each other, she deepened her appreciation for Islam and gained a far richer understanding of her own Christian faith.

“As I re-examined my assumptions about faith and God through the lens of Islam and Somali culture, I discovered that Jesus is more generous, daring and loving than I ever imagined.”